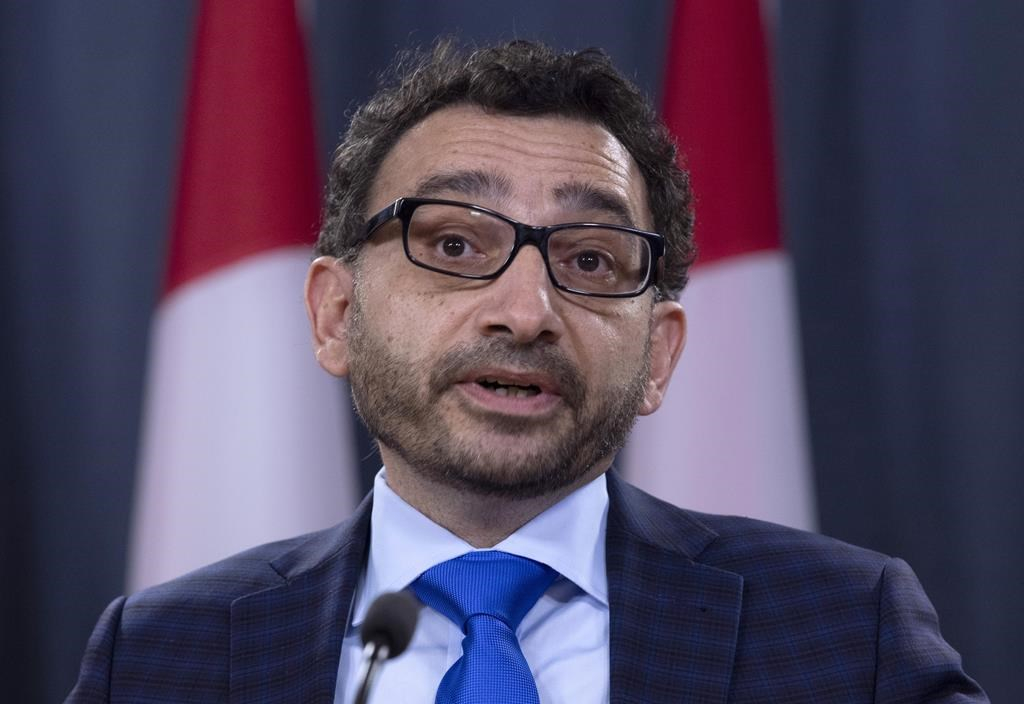 Omar Alghabra, Parliamentary Secretary to the Prime Minister attends a news conference on the Iran plane crash, on Wednesday, January 15, 2020 in Ottawa. File photo by The Canadian Press/Adrian Wyld
Previous story
Next story

The federal government promised Wednesday to match all contributions to a fundraising campaign that aims to provide financial relief for the families of the 57 Canadians killed in a plane crash in Iran earlier this month.

The prime minister's parliamentary secretary, Omar Alghabra, said Wednesday that Ottawa will equal all donations made so far to the "Canada Strong" campaign and would continue to do so until the fundraising effort reaches its goal of $1.5 million.

Alghabra said the money raised through the campaign, spearheaded by Toronto-based entrepreneur Mohamad Fakih, will be used to cover funeral costs and otherwise help victims' families navigate the aftermath of the deadly crash.

"What happened to flight PS752 was nothing short of a national tragedy," Alghabra said at a news conference in Toronto. "To those who lost family members, friends and loved ones, I want you to know that the entire country is mourning with you and we will do everything we can to provide you with the support you need."

Alghabra said the campaign, launched days after the Ukraine International Airlines flight was shot down by the Iranian military outside Tehran, has raised just shy of $600,000. All 176 people on board the flight died, including 138 who were bound for Canada.

Ottawa has confirmed that included 57 Canadian citizens and 29 permanent residents of Canada.

The Canadian Press has independently confirmed at least 93 victims with ties to Canada, many of them students and professors returning after spending the December break visiting relatives in Iran.

Iran has admitted the plane was mistaken for a hostile target amid soaring tensions with the United States.

Fakih launched the fundraising campaign days later, lamenting that Canada had been caught in the middle of an escalating dispute between the two countries. The founder of the Paramount Fine Foods restaurant chain has personally pledged $30,000 to "Canada Strong."

Fakih said he has been deeply affected by the first-hand accounts of Canadians grappling with the loss of their loved ones, including a father who recounted his final conversation with his daughter and granddaughter who died in the crash.

"I really want to be able to tell him that all Canadians did all we can for him and his family," he said. "I hope for us to continue to do that."

Fakih said the funds raised through "Canada Strong" will be dispersed with help from a steering committee, which will include former Toronto mayor Barbara Hall and a professor from the University of Alberta. At least 10 people with ties to the school were killed in the crash.

Both Fakih and the mayor of Toronto praised the federal government's pledge to match funds, with John Tory calling the move a "tangible gesture of solidarity" with victims and their families. Alghabra said the government hopes to see the proceeds of the campaign shared among the families of the permanent residents killed in the crash as well as the relatives of citizens.

Ottawa has called on the Iranian government to offer financial compensation for the victims' families, and is pushing for a more direct role in investigating the incident.

Earlier this week, Canada and its allies renewed their calls for Iran to release the black boxes from the Ukrainian jetliner to another country so their crucial flight data can be downloaded. Ottawa is also pressuring the Iranian regime to respect the wishes of those who want to see their loved ones' remains returned to Canada for burial.

One victim was repatriated earlier in the week, and Alghabra said one more is due to be processed on Wednesday.

He said repatriation efforts are underway for at least 13 additional victims so far, noting 61 other families have laid their relatives to rest in Iran.

— With files from Salmaan Farooqui

Canada-led group to Iran: crash victims families must be compensated