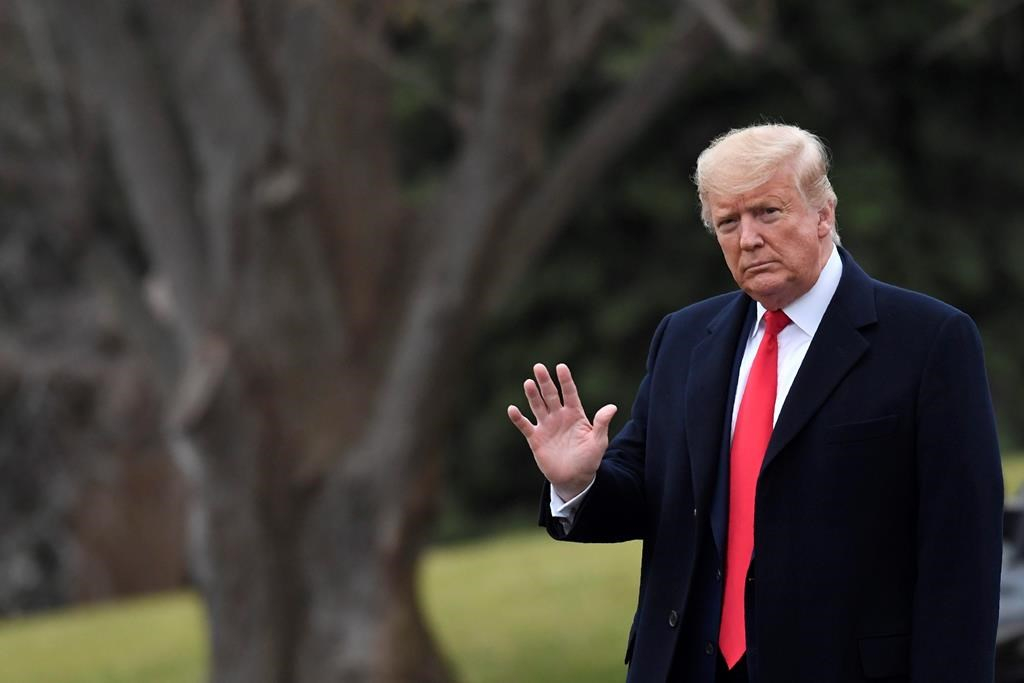 President Donald Trump walks towards Marine One on the South Lawn of the White House in Washington, on Tuesday, Jan. 28, 2020, for the short trip to Andrews Air Force Base, Md., en route to a campaign event in Wildwood, N.J. Photo by The Associated Press
Previous story

Donald Trump will usher in the start of a new era in continental trade today when he signs into law the American road map for the U.S.-Mexico-Canada Agreement, a long-sought, hard-fought trilateral deal sure to play a role in the embattled president's bid for re-election.

The ceremony clears the way for the federal Liberal government, which has been taking pains of late to avoid getting out in front of the Trump White House, to move forward with its own implementation bill in the House of Commons.

But it will still take several months before the new rules of the road are fully in place.

The agreement doesn't come into force until the first day of the third month after the final country — in this case, Canada — serves notice that it's ready to proceed. The mechanism is aimed at giving all three parties time to develop so-called "uniform regulations" used to interpret the terms of the deal.

Once that happens, a welcome measure of predictability, consistency and confidence will return to the continental trade corridor, said Kirsten Hillman, Canada's acting ambassador to the U.S. and a key member of the team that negotiated the deal.

"Trade agreements as public policy tools do two things: they open markets and liberalize trade between parties so as to incentivize mutual benefits — supply chains, investment, business partnerships — and they create predictable rules that Canadians can count on in deciding to make business choices," Hillman said in an interview.

"One of the challenges over the past couple of years has been that this instrument that underlines and underpins a $2-billion-a-day trading relationship we have with the United States has been under negotiation, creating a certain sense of instability within our trading community."

There are still unknown variables, however, including the fact that the agreement commits Mexico to a suite of labour reforms described by some as the most comprehensive and sweeping ever imposed. They include:

— Eliminating all forms of compulsory labour;

— Protections to allow workers to organize, form and join the union of their choice, and to prevent employer interference in union activities;

— Allowing free and secret votes on union leadership and agreements;

"In my view, the labour reforms being undertaken in Mexico are the largest labour reforms ever undertaken in North America, including the New Deal in the U.S.," said Dan Ujczo, an international trade lawyer and U.S.-Canada expert with Dickinson Wright in Columbus, Ohio.

"It is a huge undertaking, and so every Canadian and U.S. company that has operations in Mexico had better get ready for a significant adjustment period on labour and employment issues in Mexico."

A Canadian delegation that's taking part in a working group is in Mexico this week to determine precisely what sort of help Canada can offer in getting the reforms implemented, Hillman said.

"I am not concerned. I'm not saying it's going to be easy, but I think these obligations are very much something that are very consistent with the policies and objectives of the Mexican government," she said.

"We are wanting to do what they feel is most helpful."

Those reforms are a big part of the reason why, even as lawmakers on Capitol Hill were seized with impeaching the president and preparing for his trial in the Senate, the agreement was able to pass both houses of Congress with minimal opposition, Ujczo said.

Hillman pointed to that overwhelming support as evidence that Canadian businesses can look forward to a predictable and consistent trade landscape going forward.

"Both sides of the aisle have, to a significant degree, endorsed this as an arrangement that they believe makes sense for the United States and the North American region," she said. "I don't think we can underestimate the extent to which that will allow us to move forward with a sense of confidence that these are the rules for the foreseeable future."

Hassan Yussuff, president of the Canadian Labour Congress, said he's hopeful that the USMCA and its labour reforms, which Mexico intends to implement over the next four years, will help to ease a degree of long-standing resentment on the part of workers in Canada and the U.S., fuelled by years of watching good manufacturing jobs drift south of the U.S.-Mexico border.

"The proof will be in the pudding in terms of whether the Mexican government can live up to the agreement," Yussuff said.

"The proof will be in the

"The proof will be in the pudding," says the president of the Canadian Labour Congress.
Someone's going to put a proof in a pudding? What proof -- Fermat's Last Theorem? In a plum pudding perhaps?
And in Canada it's officially CUSMA, not You Smack Uh.

Everything you need to know

Everything you need to know about this trade treaty is encapsulated in the acronym - US (first, and overshadowing the rest) M (squeezed between US and CA) CA (sucking the hind tit, picking up the leftovers)....