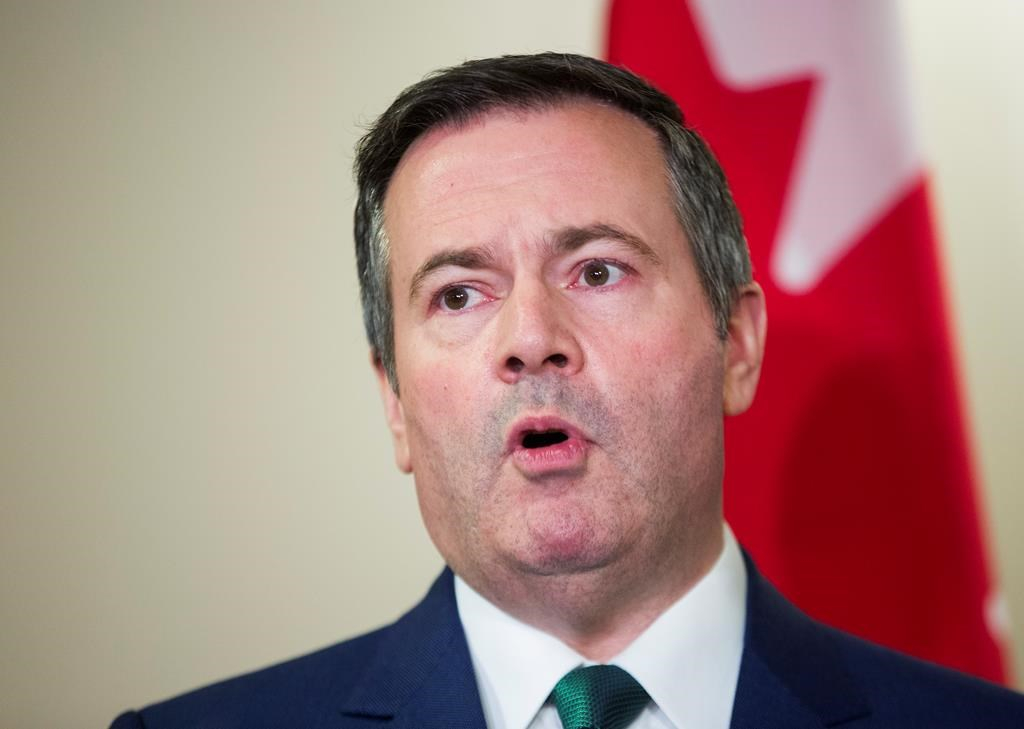 Jason Kenney opted to join Ontario counterpart Doug Ford in the Democratic doghouse Saturday as the Alberta premier vented his spleen about progressive presidential hopefuls who have vowed to block the controversial Keystone XL pipeline expansion.

With Ford seeking shelter from the blowback for having criticized House Speaker Nancy Pelosi and Vermont Sen. Bernie Sanders the day before, Kenney chose to lean in, accusing certain Democratic presidential contenders — he did not name names — of betraying a close neighbour and ally and all but endorsing energy imports from "regressive regimes" in the Middle East.

"Many of them, quite rightly, admire Canada as a progressive liberal democracy, as a close friend and ally of the United States," Kenney said, answering a question he hadn't been asked during a joint news conference in Washington with Ford, Saskatchewan Premier Scott Moe, Quebec's Francois Legault and Blaine Higgs of New Brunswick.

"Why then would they threaten to tear up an agreement that will be the basis of a multibillion-dollar Canadian investment in this country to become an even bigger and more reliable secure source of energy?"

Sanders, an Independent from Vermont, has signed on to a pledge to block Keystone XL if he becomes president, as has his progressive rival, Massachusetts Sen. Elizabeth Warren. Others, like Minnesota Sen. Amy Klobuchar, former vice-president Joe Biden and Pete Buttigieg — the mayor of South Bend, Ind., and a presumptive front-runner along with Sanders following last week's snafu-plagued Iowa caucuses — have been hedging their bets.

Kenney likened opposing Keystone XL to endorsing ever more imports of Middle Eastern "OPEC dictatorship" oil, a tacit endorsement of "regressive regimes that have zero environmental transparency, lower environmental standards and no respect for human rights — in many cases, regimes that spread violence, conflict and extremism around the world."

"Why are they prepared to do great economic damage to their closest friend and ally, the most progressive and liberal source of energy on Earth, when they don't threaten to ban OPEC imports into the United States?"

The premiers were in the U.S. capital to promote trade ties with state leaders and to celebrate and reinforce the importance of the U.S.-Mexico-Canada Agreement, which is expected to go into effect later this summer after it gets ratified in the House of Commons.

Ford pulled focus from that mission Friday when he described the prospect of a Sanders presidency as "scary" and chastised Pelosi for ripping up her copy of Trump's remarks following Tuesday's state of the union speech on Capitol Hill.

"Let me tell you why I'm here," Ford said when asked if he was standing by the sentiments. "I'm laser-focused on making sure we work with other governors — and I don't care what political stripe they're from; they can be Democrats, they can be Republicans. I'm going to work with whomever gets elected ... to make sure we continue on job creation, economic development, building relationships."

Kenney has already made it clear that getting the on-again, off-again Keystone XL project back in gear is high on his agenda this weekend, which may explain why he chose to draw fire away from Ford.

"This friendship, this alliance, has to be a two-way street," he said.

"One of the greatest things that Canada represents to this country is energy security and energy independence. As long as that energy is needed in this country, I think Americans would rather that it be developed in North America by North Americans, including Canadians, rather than shipped over here by Saudi Arabia and OPEC dictatorships."

Ford would not acknowledge "rumours" that the White House is considering a withdrawal from the World Trade Organization's $1.7-trillion General Procurement Agreement, a long-standing compact aimed at protecting shared access to government contracts around the world from domestic protectionist policies. Deputy Prime Minister Chrystia Freeland said Friday that she raised the matter with U.S. trade ambassador Robert Lighthizer, but would not elaborate.

With similar procurement provisions that once covered Canada under NAFTA no longer in the USMCA, protectionist sentiment in the U.S. under so-called "Buy American" laws could become a new challenge for Canadian businesses and governments in an age of managed trade.

"That is precisely why we are here — building our relationships with our respective counterparts and anyone we can, quite frankly, within the U.S. administration," said Moe, who is leading the delegation as this year's chairman of the Council of the Federation.

The USMCA notwithstanding, Canada and the U.S. still have no end of trade irritants to wrestle with, Moe said, including Keystone, the ever-present softwood lumber dispute, country-of-origin labelling rules that restrict Canadian imports and the ongoing prospect of Section 232, the U.S. trade provision that Trump — the self-proclaimed "Tariff Man" — used against Canadian steel and aluminum producers throughout 2018 and 2019.

The five premiers were all smiles later Saturday as they joined Maryland Gov. Larry Hogan onstage for a panel discussion about infrastructure at the winter meeting of the National Governors Association, each one delivering a sales pitch to state leaders about the virtues of doing business with their respective provinces.

Legault urged leaders planning transit upgrades to give him a call to talk about Montreal-based Bombardier, which he billed as the only major company on the continent in the business of building trains and streetcars, and to lobby against Buy American rules, which require 70 per cent U.S. content and would prevent a lucrative cross-border partnership from taking hold.

"There's a great opportunity to work together to build a champion of these products in North America," he said. "The requirement of 70 per cent doesn't permit us to integrate our companies together."

This report by The Canadian Press was first published Feb. 8, 2020.

Doug Ford is an ignorant goon

Doug Ford is an ignorant goon. That is not a statement of dislike...it's a statement of fact. It is just like saying Doug Ford has blond hair. Sadly, he can't help himself when it comes to populist ranting. But I'm glad to see he walked back some of his foolishness. He really is Trailer Park Trump.

And Jason Kenney better be careful how much he denigrates the Saudis. Prince Mohammed Bone Saw is very popular with the Trump people.