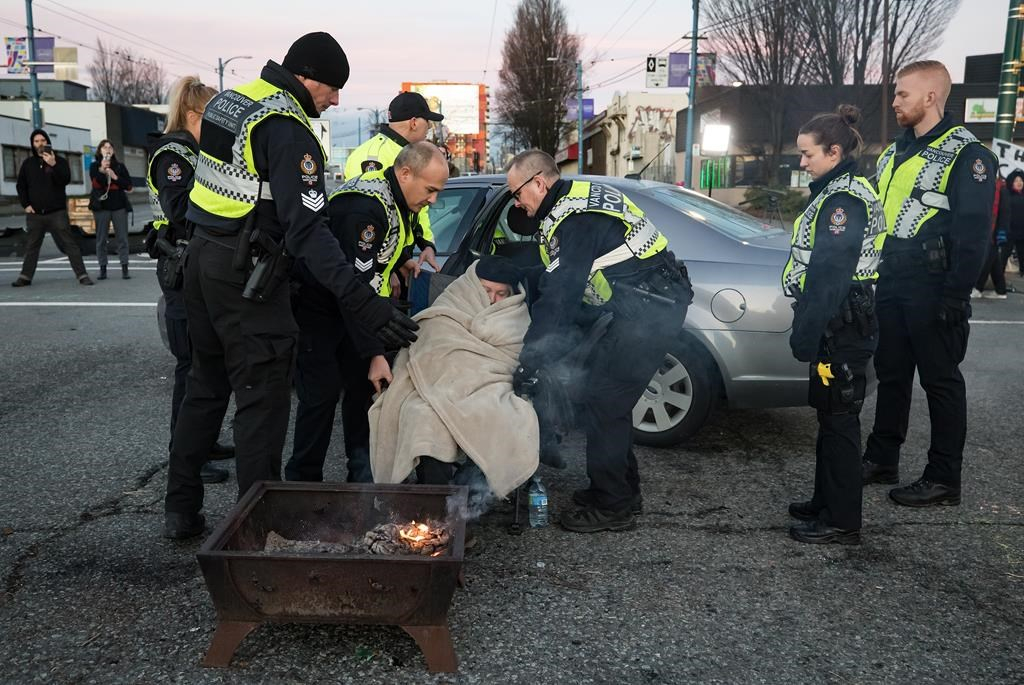 Police officers remove an elderly woman from the road where protesters demonstrating in solidarity with Wet'suwet'en hereditary chiefs in Vancouver, on Monday, February 10, 2020. Photo by The Canadian Press/Darryl Dyck
Previous story
Next story

Opponents of a natural gas pipeline in northwestern British Columbia say they believe protests across the country are sparking a growing awareness of Indigenous rights that will lead to long-term change.

Protesters blocked train traffic in east Vancouver on Monday afternoon to support Wet'suwet'en hereditary chiefs who oppose the Coastal GasLink pipeline. The protest came hours after nearly 60 people were arrested for obstructing busy ports in the city and in nearby Delta.

Demonstrators gathered on the B.C. legislature steps in Victoria, where traffic was also tied up because of blockages on two bridges Monday evening.

Pipeline opponents also gathered at the office of the Crown-Indigenous relations minister in Toronto, the federal justice building in Ottawa, a commuter train line in Montreal and outside an event with the natural resources minister in St. John's, N.L.

Jen Wickham, a spokeswoman for one of the five clans that make up the Wet'suwet'en Nation, said she believes non-Indigenous Canadians are becoming more aware of First Nations rights.

The RCMP began enforcing a court injunction last week against people camped near a pipeline work site in Houston. Mounties said 14 people were arrested and expected to appear in B.C. Supreme Court on Monday.

Mounties said in a statement late Monday they have concluded major operations to enforce the injunction, following the arrests of seven more people earlier in the day.

They said Coastal GasLink employees removed a barricade from the Morice River Bridge, though RCMP will continue to monitor the road to ensure it remains open.

Wickham said members are defending their territory from construction of the pipeline, which is part of a $40 billion liquefied natural gas export project.

"We are the rightful title owners of our territory and we will continue to assert our sovereignty," she said. "It's not a question of protesting. It's a question of their homes. They're defending their homes."

Protesters began disruptions at ports in Vancouver and nearby Delta on Friday. The ports obtained court injunctions and arrests were made Monday morning, when Delta police said emergency health services were called for one protester out of an abundance of caution.

"Everyone involved was treated respectfully and with dignity," said Cris Leykauf, a Delta police spokeswoman.

Demonstrators regrouped and impeded a major rail thoroughfare that feeds into the port. Spokeswoman Natalie Knight said about 150 people were there on Monday afternoon.

"We want to send a clear signal in at least two different directions. We want to signal to ourselves that we are strong, that we are not afraid of the colonial legal courts, and that we stand with the Wet'suwet'en," she said.

Vancouver police said it was monitoring the protest and no arrests had been made.

The Vancouver Fraser Port Authority said it had not heard of any terminal delays due to demonstrations on the rail lines but it continued to monitor the situation.

Knight also said she has seen public opinion shift toward support of the Wet'suwet'en hereditary chiefs.

The situation reminds her of pivotal moments in history, such as the 1990 Oka crisis, a 78-day standoff involving a group of Mohawk people that led to the federal government taking a closer look at its relationship with Indigenous Peoples, she said.

In the years that followed, residential schools were closed and the Truth and Reconciliation Commission was launched, Knight said.

"The ripple effects of these kinds of actions for Indigenous sovereignty are much bigger than we can predict or see in this current moment."

"Natural resource development in this country, at a time when we've committed to net zero, when a majority of Canadians have voted with clear concern about climate change, there are going to be protests and people feel very strongly about it," O'Regan said.

"I was more than happy to hear their concerns and I'm sure I'll be hearing a number of others as I go across the country."

About 30 people waited for six hours in the lobby of the federal justice building in Ottawa until a trio of department officials came down to hear their concerns. The officials said Justice Minister David Lametti was travelling and unavailable, but protesters said they wouldn't leave until they spoke to someone in a position of authority.

Emma Buchanan, who attended the protest, said the national show of support for the Wet'suwet'en was a sign that people are waking up to the need to support Indigenous people.

"Indigenous issues are Canadian issues and they are for everybody to care about," she said.

Lametti said in a statement that he had spoken by phone with the protesters and was committed to bringing their demands to his cabinet colleagues.

"Advancing reconciliation is a crucial priority for our government and our country," he said. "I take this responsibility very seriously."

On the B.C. legislature steps, protester Kolin Sutherland-Wilson said he feels a responsibility to stand up for Wet'suwet'en members.

"In this day and age, it is immoral, it is unjust and it is inhumane for Canada to continue to criminalize and vilify Indigenous law," he said.

All 20 elected band councils along the pipeline route, including the Wet'suwet'en council, have signed benefits agreements with Coastal GasLink. However, the Wet'suwet'en hereditary chiefs say the council established by the Indian Act only has authority over reserve lands.

The hereditary chiefs assert title to a vast 22,000-square-kilometre area because they have never signed a treaty ceding their traditional territories.

Premier John Horgan has said the pipeline is of vital economic and social importance to northern B.C. He said the courts have decided the pipeline can proceed and the rule of law must prevail.

B.C.'s Indigenous relations minister did not immediately respond to a request for comment Monday.

— With files from Dirk Meissner in Victoria, Rob Drinkwater in Edmonton, Stephanie Levitz in Ottawa and Holly McKenzie-Sutter in St. John's, N.L.

I would love to know how many

I would love to know how many tax dollars the RCMP has spent in its operations against the Wet'suwet'an.

If "rule of law" were

If "rule of law" were actually a priority for the BC government, they would have been obeying the Supreme Court decisions of 1995,97,2014 which stated that Hereditary chiefs and feast hall law are the law on Wet'suet'en unceded territory. But they have been flaunting that ruling for over twenty years whenever it conflicts with what THeY want.
Rule of law seems a pretty slippery concept in the hands of politicians. Ordinary Canadians have a much more dignified sense of natural justice. #Wet'suet'en Strong