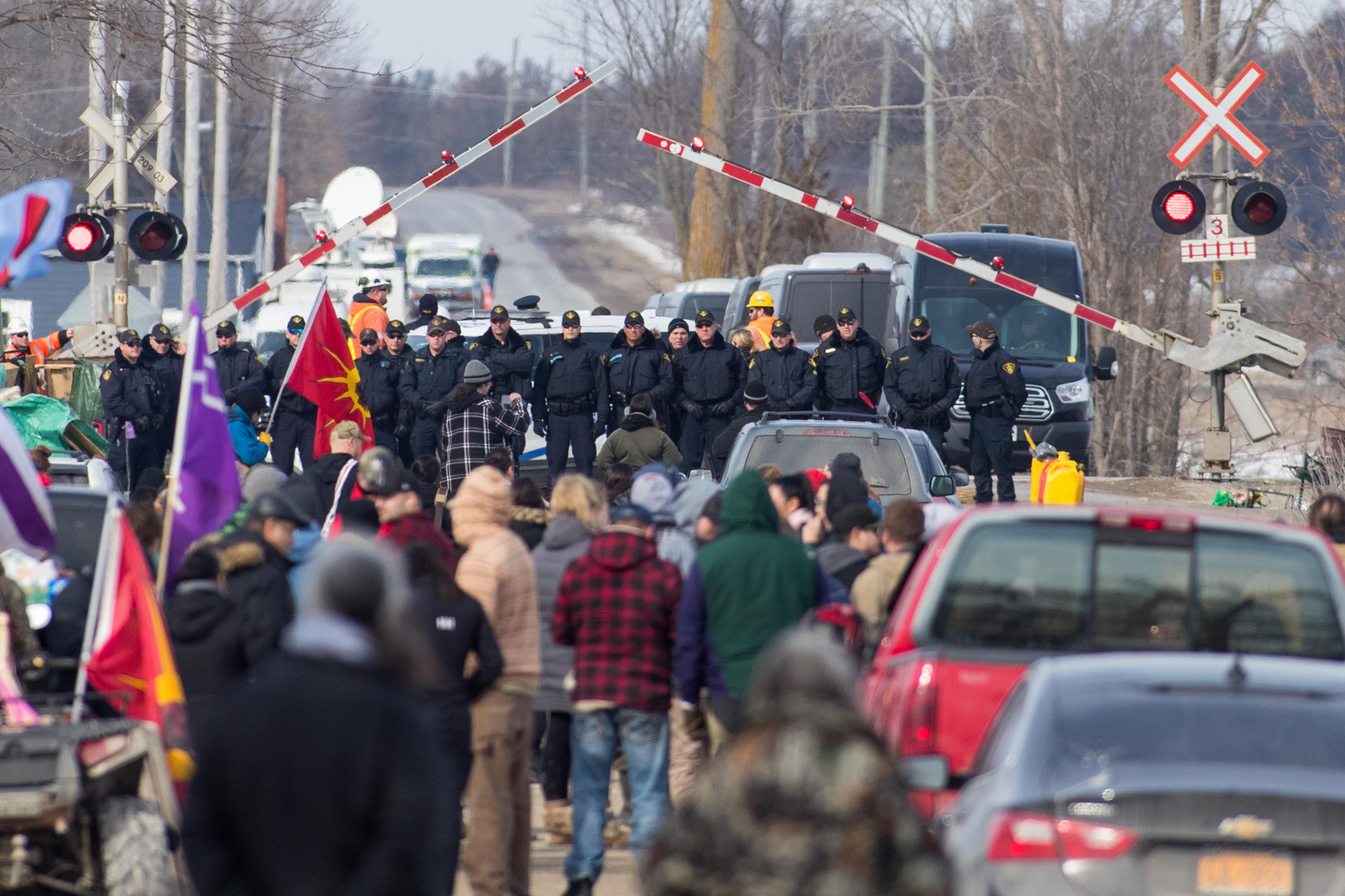 Police moved to enforce an injunction against blockaders at rail line protest near Belleville, Ont. on February 24, 2020. Photo by the Canadian Press / Lars Hagberg
Previous story
Next story

Ontario police moved to break up a Mohawk camp near railway lines in eastern Ontario early on Monday. They arrested several people standing in solidarity with Wet’suwet’en hereditary chiefs opposing a planned pipeline through their unceded territory in northern British Columbia.

But several more protests disrupted traffic in other parts of the country even as the most effective one was being dismantled, highlighting the challenge law enforcement and the government have in tamping down a movement in support of Indigenous rights and protection of the environment.

At least 10 police vehicles and dozens of officers moved in on the Tyendinaga Mohawk blockaders shortly after 8 a.m. Monday. Footage from the scene showed scuffles and at least one person being forcibly detained by five officers.

Meanwhile, several hundred people demonstrated in downtown Ottawa, marching and beating drums in support of the Wet’suwet’en. And a slow-moving convoy of vehicles associated with Mohawks from Kahnawake briefly disrupted morning traffic just south of Montreal.

The police had on Sunday given the Mohawk blockaders near Belleville a midnight deadline to remove the blockade or face enforcement of an injunction sought by CN Rail and granted by an Ontario court soon after the blockade was first established on Feb. 6.

Those blockading on the territory of the Tyendinaga Mohawks near Belleville said they intended to remain in place until RCMP forces leave Wet’suwet’en territory.

“Unfortunately, all avenues to successfully negotiate a peaceful resolution have been exhausted and a valid court injunction remains in effect,” the OPP said in a statement.

A police spokesperson would not say how many people had been arrested or whether they would be charged.

The blockaders said soon after that deadline passed that they continued to seek a peaceful resolution, and that they were expecting word from federal Indigenous Services Minister Marc Miller confirming that the RCMP were no longer on Wet’suwet’en territory.

“We ask that the OPP refrain from the use of force and allow for a peaceful resolution,” they said in a statement released in the name of the Mohawk people in Tyendinaga.

Miller later told reporters in Ottawa that the B.C. RCMP were due to meet with Wet’suwet’en hereditary chiefs later in the day.

He said that meeting would aim to “go through a step plan as to what expectation is over the next few days. We’re hoping the results of that meeting will be positive.”

But Wet’suwet’en Hereditary Chief Woos, who also goes by Frank Alec, said the meeting was not entirely positive. He said the RCMP provided an unsigned letter suggesting their full exit from Wet’suwet’en territory would take 16 days.

“They need to work on that letter,” he said. “First of all, with a demobilization date that will preferably be tomorrow, then put it on their legal letterhead and have it signed.”

He questioned why it would take that long to remove equipment from the Kilometre 29 point on the remote service road through Wet’suwet’en territory. “It looks like they are almost there, I don’t know why it’s hard for them. It’s not that difficult to move three trailers and it’s not difficult to move a generator.”

He said it should not take more than 48 hours, and at that point he and other hereditary chiefs would be willing to sit with federal and provincial ministers to discuss next steps.

Wet’suwet’en representatives — who had visited the Mohawks in Tyendinaga and other supporters in eastern Canada late last week — released a statement shortly after the OPP moved on the Tyendinaga Mohawk blockade that said while arrests were being made in Ontario the RCMP had entered the Unist’ot’en camp and were continuing to patrol their territory.

The move to break up the Mohawk camp, which has throttled freight and passenger rail traffic for weeks, came after Prime Minister Trudeau said last Friday the blockades must come down and said injunctions to clear the rail lines must be enforced.

Passenger rail company VIA Rail said on Monday that its Montréal-Halifax route will resume service this Friday. It will keep routes from Toronto to Ottawa and Montréal closed until at least Friday but said it is working with CN Rail to get those and other routes opened as soon as possible.

Trudeau blamed Indigenous leadership for not being receptive to his government's attempts at negotiation in his comments on Friday. On Monday he said his government had worked with the rail companies on alternate freight routes to limit disruption.

Meanwhile, also on Friday and at the heart of the dispute, British Columbia’s Environmental Assessment Office (EAO) ordered the energy company behind the Coastal GasLink pipeline to go back and carry out more consultations with Wet’suwet’en hereditary chiefs before it can proceed.

As news spread west of the OPP arrests at the Tyendinaga, supporters in Vancouver began organizing their own solidarity actions.

In east Vancouver, around 100 people gathered to march through the streets.

Before the march, Herb Varley spoke of the now three weeks he and many others have spent staging these solidarity actions.

“It feels like a much longer time,” he said. “I thank everyone here who doesn’t have a gun on their hip.”

“It’s very easy for us to feel isolated and alone in struggles like this,” he said.

“Colonialism isn’t ancient history. It is ongoing. The raid this morning on Tyendinaga proved that. The RCMP raid on Gidimt’en earlier this month proved that,” he said.

The march ended at the intersection of Clark Drive and East Hastings street, blocking one of the main arteries for trucking traffic leaving the Port of Vancouver.

The intersection is subject to a court injunction allowing police to arrest anyone creating interruptions at the port. Earlier this month several people were arrested after a similar blockade at the same location lasted for days.

As the dozens of people spread out blocking the intersection, Varley acknowledged that these kinds of actions are damaging Canada’s economy.

That’s the point, he said.

“If Canada had any shame we might have had better relations about 150 years ago,” Varley said.

“But they have no shame, so we are left with no point but to make them feel economic pain,” he said.

Gathered nearby the intersection was a group of men who said they are workers at the port. Several of them heckled the demonstrators blocking the intersection, but would not speak to a reporter.

At around 3:30 pm Pacific, a group of about a dozen Wet’suwet’en supporters blocked the CP Rail line in Maple Ridge, disrupting service on the West Coast Express — a key commuter rail service servicing the Fraser Valley, according to a statement released by the transit agency.

“We are recommending West Coast Express customers to use SkyTrain to Coquitlam Central Station, then bus bridge to travel further east,” the statement said.

She said as the crisis has dragged on, this movement has become about more than just a pipeline. It’s about defending Indigenous sovereignty, she said.

“To hear that these people are being arrested it struck a lot of anger in me, and a need to do an action,” she said.

“This is an action for the Wet’suwet’en and the Tyendinaga. We are planning to stay here until the OPP back off Tyendinaga and the RCMP withdraw from Wet’suwet’en territory,” Morris said.

Earlier in the day a rail blockade in Gitxsan territory was put back up near New Hazleton, BC in solidarity with their longtime neighbours and allies, the Wet’suwet’en.

“Knowing that Gitxsan blood flows through my veins is important to know that these people are my family, and we’re standing in solidarity with them,” Morris said.

The Maple Ridge blockade also snarled traffic along the Haney Bypass. As the evening sun began to set, several local residents came out to confront the blockaders.

One woman waved a family member's military medals, saying they had fought for everyone including the blockaders’ freedom.

Another woman wearing a motorcycle helmet arrived and began trying to take down banners erected by the blockaders.

She was stopped by nearby RCMP officers who explained it was their job to handle the situation, not hers.

In both cases blockaders started chanting “we stand with Wet’suwet’en!” until the women left.

As night fell, more counter-protesters arrived, shouting at the protesters who shouted back their slogans over and over.

On Twitter, Wet’suwet’en Gidimt’en clan spokeswoman Sleydo’, who also goes by the name Molly Wickham, posted a video praising the actions of the Tyendinaga land defenders, and urging other supporters to watch police actions closely.

The Tyendinaga land defenders “are standing up for Indigenous rights and Indigenous sovereignty,” Wickham said.

“I want to send all our love out to them, and make sure that people are watching what’s happening,” she said.

A key demand of nearly all solidarity actions around the country in the past weeks has been for the RCMP to withdraw from Wet’suwet’en territory. Last week the national police force closed - but did not remove - its temporary detachment on the Morice West Forest Service Road, but said it would continue patrols in the area based out of nearby Houston, B.C.

Wickham said that just as OPP moved to begin arrests in Tyendinaga, RCMP officers arrived at the Unist’ot’en healing lodge.

“As soon as the OPP started moving in and arrests started being made in Tyendinaga, the RCMP drove into Unist’ot’en camp,” Wickham said.

“They’re surveilling and watching how the Wet’suwet’en are going to respond,” she said.

Wickham urged supporters from “coast to coast” to continue standing in solidarity with the Wet’suwet’en hereditary chiefs, saying the weeks of blockades and marches are having an impact.

“We’ve seen that the only way (the government is) going to try and sit down and have discussions with us is when it hurts their bottom line,” Wickham said. It’s “profit over people, profit over Indigenous lives. That’s not the way it’s going to fly anymore.”

I want to know who is calling

I want to know who is calling the shots in RCMP behaviour at Houston detachment. I want to know why removing RCMP stuff and presence is so hard to do. I want to know if excavators are digging pipe trenches while this all goes on making the request to not destroy pristine land, disturb wildlife and compromise an important aquifer moot.
Why is there no reporting from ground zero of this situation????? Who is controlling the decisions on that ground?????