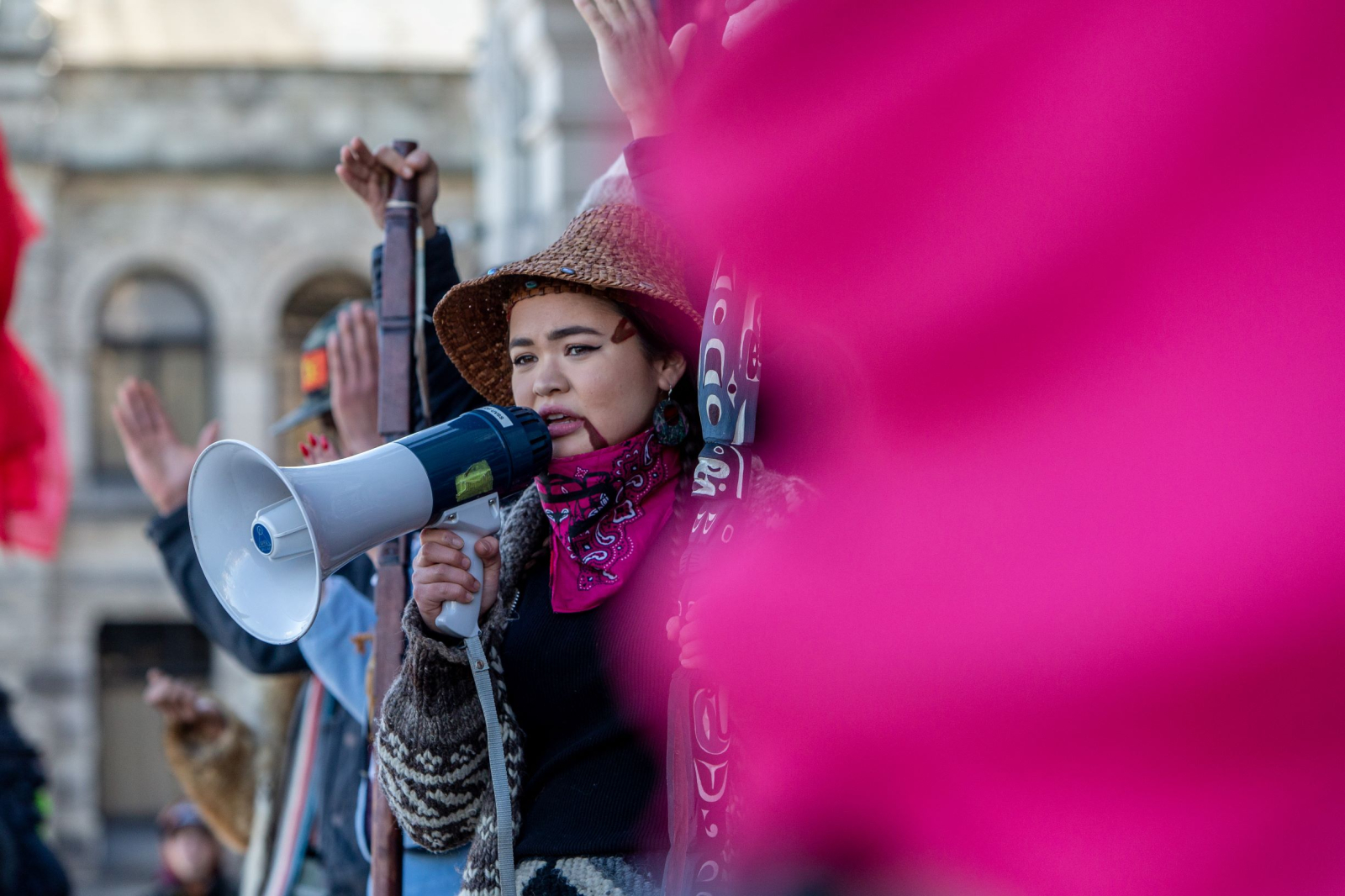 Ta'Kaiya Blaney speaks at a rally in support of eh Wet'suewt'en hereditary chiefs on the steps of the BC Legislature. February 28, 2020. Photograph by Jesse Winter
Previous story
Next story

Blaney is one of the core organizers of the youth-lead occupation of the BC Legislature. Entering its sixth day Saturday, Blaney and other Indigenous youth have been sleeping on the legislature steps, surrounded by a shifting cast of supporters maintaining a camp outside the doors of power.

On Wednesday, the B.C. Liberals released figures the party says were taken from American IRS tax returns showing more than $4 million in donations from US charities and foundations to Canadian environmental groups, including the Dogwood Initiative, Wilderness Committee and West Coast Environmental Law.

BC Liberal leader Andrew Wilkinson claimed that money is being used to fund “a well organized campaign,” to “create economic chaos across this province,” including blockades and actions of civil disobedience.

“We had people from white supremacists groups coming through and scouting us last night,” Blaney said.

Blaney said over the past few days the group has faced increasing intimidation and surveillance - not from police but from people they believe are members of alt-right groups.

She said her father was threatened Friday night by two women she believes are connected to white supremacist groups.

“He was told he shouldn’t be here, that it would be dangerous here Friday night,” Blaney said.

Blaney said recent rhetoric about foreign funding from the BC Liberal Party risks encouraging alt-right aggression and potentially violence because it frames Wet’suwet’en supporters like her as foreign-funded radicals.

“I think that it’s implying that Indigenous people standing for their lands are compelled by some foreign authority,” Blaney said.

“We had people from white supremacists groups coming through and scouting us last night,” Blaney said.

But a closer look at those IRS returns referred to by Wilkinson suggests the grants highlighted by the Liberals - many of which are several years old - did not go to the Wet’suwet’en hereditary chiefs or to support civil disobedience or rail blockades.

“It's actually laughable because I would love to see a cheque in the mail for this work that I'm doing, you know?” said Nikki Sanchez. She has been working as the media liaison and organizer with the youth leading the demonstrations outside the B.C. Legislature in Victoria, where Wilkinson made his allegations on Wednesday.

She said many of the organizers have been spending 18 hours a day keeping the legislature camp supported and running - everything from fixing broken generators to responding to media requests and organizing food and donations. Many of them are sinking into credit card debt to cover it all, she said. 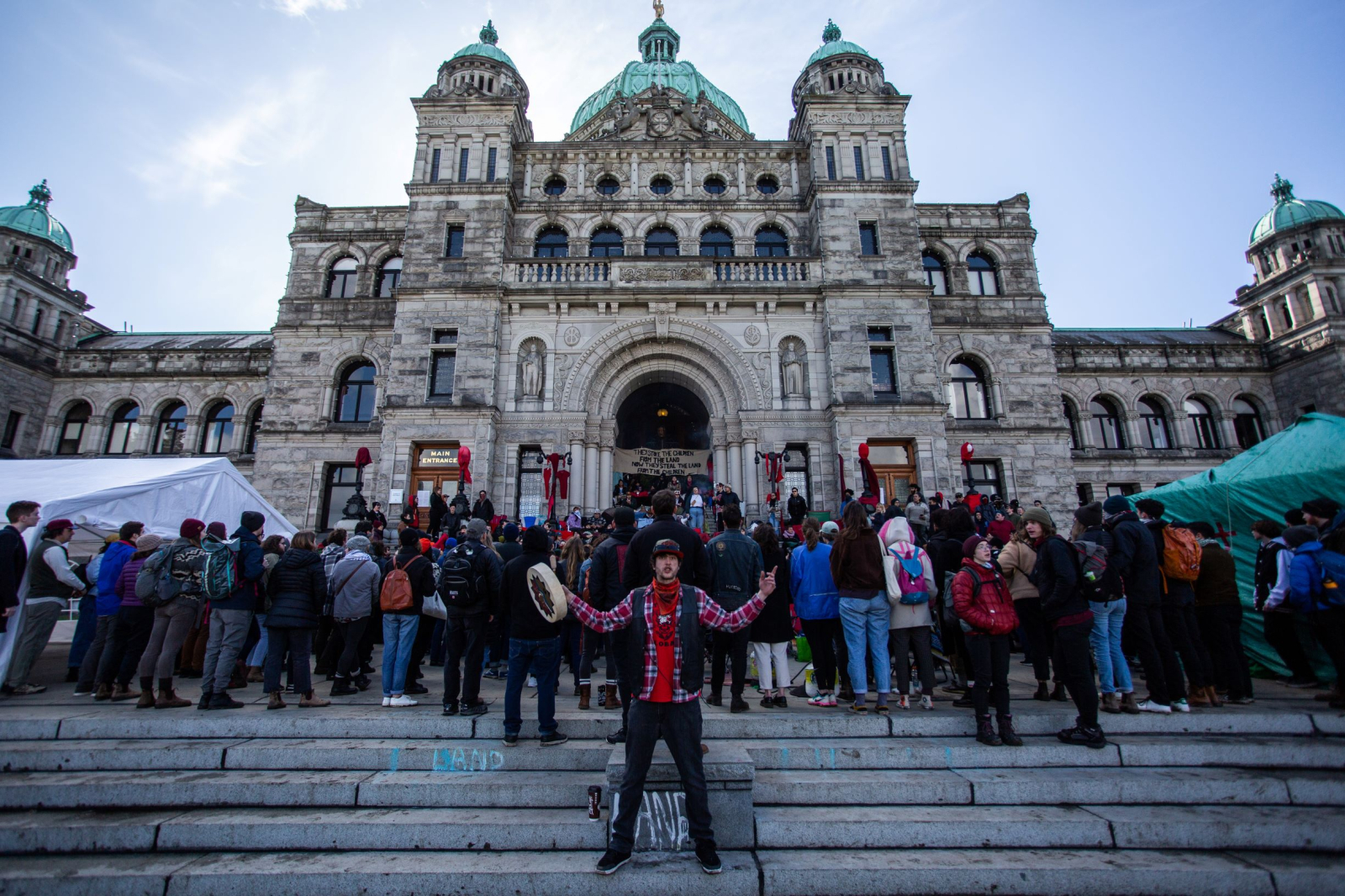 A supporter gestures outside the BC Legislature in Victoria at rally on February 28 of Indigenous youth supporting the Wet'suwet'en hereditary chiefs against the Coastal Gaslink pipeline. Photograph by Jesse Winter

Canada’s National Observer asked the Liberal Party if it could provide evidence that any of the donations they highlighted were used to support Wet’suwet’en hereditary chiefs or their supporters.

The party did not respond to our requests.

What can be established is that more than half the $4 million Wilkinson seems so upset about went to support initiatives at West Coast Environmental Law, WCEL, including a years-long multi-million dollar program championed by former Liberal premier Christy Clark’s government.

The Marine Plan Partnership for the North Pacific Coast, or MaPP initiative, began back in 2011 as a partnership between the B.C. government and 16 participating First Nations. Its goal was to bring together the best available science with local and traditional knowledge to help develop sub-regional plans for managing B.C.’s sensitive coastline environments.

Some of the funding to support the project came from the California-based philanthropic Gordon and Betty Moore Foundation, including more than $730,000 to WCEL which helped develop the legal implementation of the regional plans.

As a partner in the project, BC government itself has committed roughly $3.8 million through staffing and through the purchase of carbon credits in the Great Bear Rainforest, according to Meaghan Calcari, a program manager with the Moore Foundation’s marine conservation initiative. 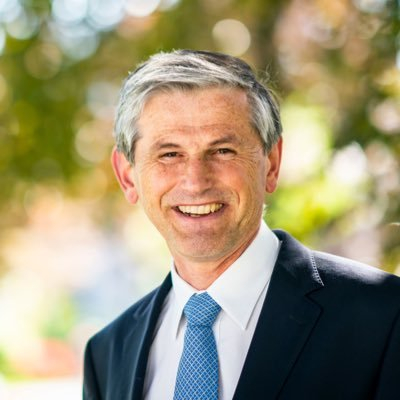 In an email Calcari expects the provincial governments ongoing contributions to be in the neighbourhood of $3 million per year for the next 15 years while the marine plans are implemented.

Liberal MLA Steve Thompson, then-Minister of Natural Resources, boasted about the project in a 2015 press release marking the completion of the joint planning phase of work.

The MaPP process marked “a milestone for the sustainable economic development and stewardship of British Columbia’s coastal marine environment,” Thompson said. “I look forward to working with First Nations as we move toward implementation.”

As well as helping fund the MaPP project, the $2.3 million in total grants from the Moore Foundation to WCEL went to support initiatives like the RELAW co-learning program, which helps revitalize Indigenous laws, and to support the push to secure legal protection for sensitive salmon-bearing ecosystems.

“The obvious point is that none of the grants cited by Mr. Wilkinson were used for anything at all related to Coastal GasLink,” Clogg said.

After Wilkinson’s comments in the legislature on Wednesday, some local journalists pointed to the Wilderness Committee National Campaign Director Torrance Coste’s Twitter account as evidence of his work organizing the protests, which he denies he is doing.

“It is frustrating to me, the obsession, the fixation on where environmental groups getting their money,” Coste said.

“It’s rooted in two things,” he said. “The first is this deeply held racism and the notion that indigenous leaders … are incapable of leading a tactically brilliant, sustained movement, that they must be aided and abetted by shadowy foreign NGOs.”

“The second is a lack of courage to face what's really the core of this issue. And that's confronting what recognizing indigenous rights, indigenous laws and indigenous governance really means for Canada.”

Coste acknowledged that he has been a vocal supporter of the Wet’suwet’en solidarity movement online, but that his and his organization’s role is simply one of amplifying a message that resonates with Wilderness Committee’s donors.

In fact, organizations like Wilderness Committee would risk losing their status as charitable status if they organized or endorsed civil disobedience or anything illegal, Coste said. “We can walk right up to that line, but we cannot cross it,” he said.

At the legislature on Saturday several hundred people came out to support the Indigenius youth’s occupation in a show of force meant to dissuade counter protesters from showing up.

Organizers instructed the crowd how to peacefully defend the space if any counter protesters did show up, with planned “soft-blockades” of people standing shoulder to shoulder.

Gordie Bear said that even if any counter protesters became confrontational or shouted racial slurs, blockaders at the legislature should respond simply by smiling calmly.

“We will treat everyone with love and respect. That is how we will hold this space,” said Bear. “We are not here to be violent.”

Near noon several people were seen circling the legislature grounds and videotaping the rally, but they left quickly when Bear walked over to speak with them.

By early afternoon Blaney said it appeared the community support had worked, although she remained worried about what alt-right groups might do once crowds disbanded for the day.

“I think this outpouring of community of support we are receiving is definitely a deterrence for white supremacists,” she said.

But as she and the others faced another night on the cold concrete steps, she said it’s important that supports stay close to help protect them.

“We also know these are a very hateful group of people, and that they’re going to target us when we are vulnerable,” she said. 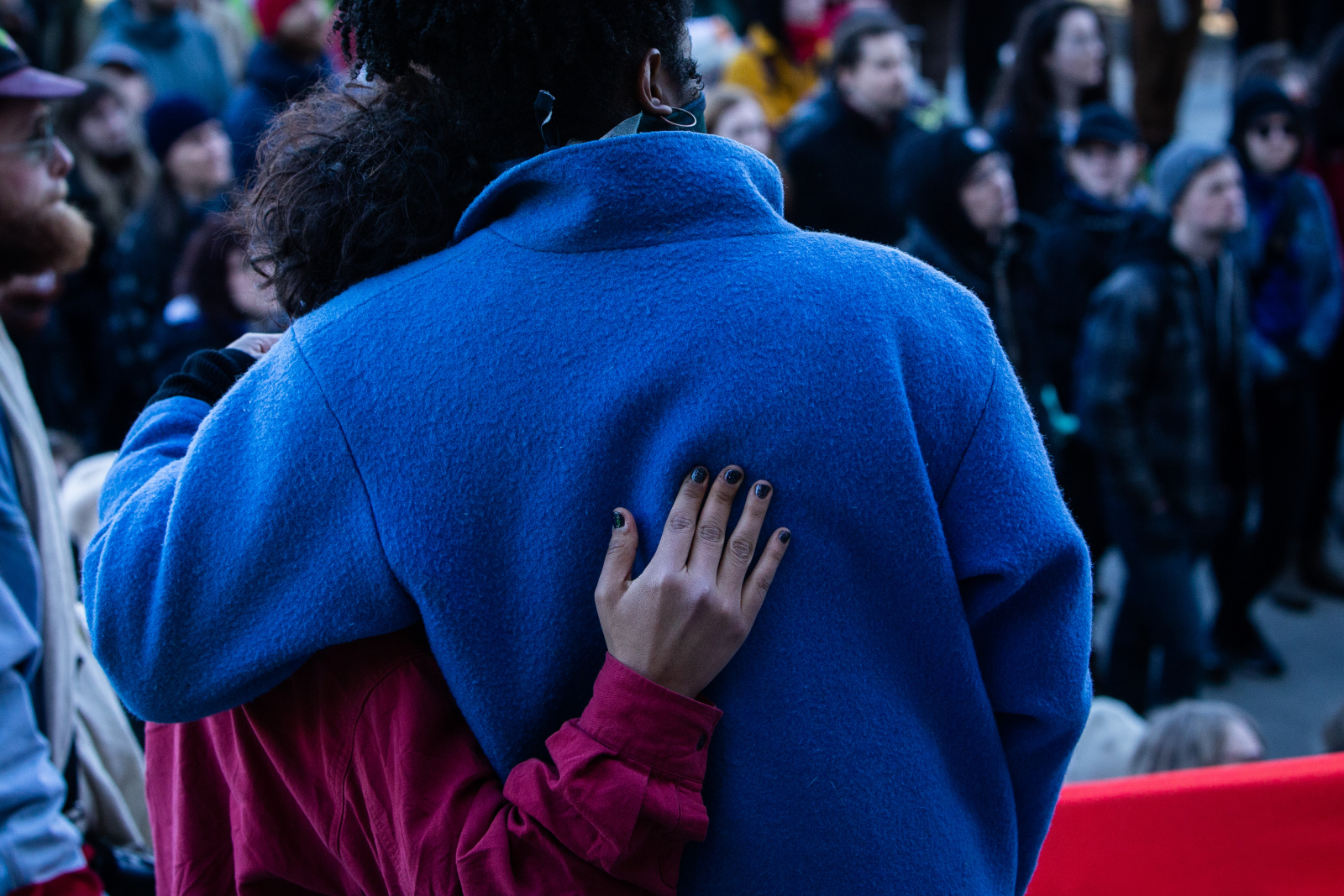 Supporters hug during a rally in support fo the Wet'suwet'en hereditary chiefs at the BC Legislature in Victoria on Saturday, February 28, 2020. Photograph by Jesse Winter

Of course *none* of the

Of course *none* of the fossil-fuel companies are foreign-funded at all, are they?

As a lifetime resident of BC

As a lifetime resident of BC I have come to realize that it is a mistake to place trust in ANYTHING that the BC provincial Liberal party announces as fact. Even the party name is a fraud, calling themselves "Liberals" when they are obviously a Conservative Party. Recent evidence includes the former "Liberal" premier Christie Clark being considered as a new leader of the Federal CONSERVATIVE Party and that was not crossing the floor.

Bc Liberals and Wilkinson are

Bc Liberals and Wilkinson are grasping at straws! Old propaganda being used over and over again! Jason Kenney’ based his platform in it and now Wilkinson! Sad that fake news has entered into the ‘Conservative’ parties to swing voters their way! Google Debunking Vivian Krause-to learn how 4million dollars fr foreign sources gets used and reused to spread hate and untruths about environmental NGO’s. Here is one source of truth: https://energi.media/deep-dives/debunked-vivian-krauses-tar-sands-campai...

Interesting that most of the

Interesting that most of the lolly went to Wilkinson's mentor's project . . . he clearly didn't notice that fact when accusing others of bad behaviour; and he's hoping we've all forgotten about the decades of mean+nasty, we-hate-the-poor "liberal" governance. He needs to stay in his corner under his Dunce Cap for some time yet.

The First Nations' response to protect their land is heroic. More than just their land, they are bravely standing up and letting the world know that there are still humans who have integrity and who understand the full meaning of resource extraction - that takes resources away from people to garner profits in foreign accounts while leaving a poisoned barren earth for people.

What about Jessica Clogg

What about Jessica Clogg starting a Go Fund Me page to help the protesters financially?