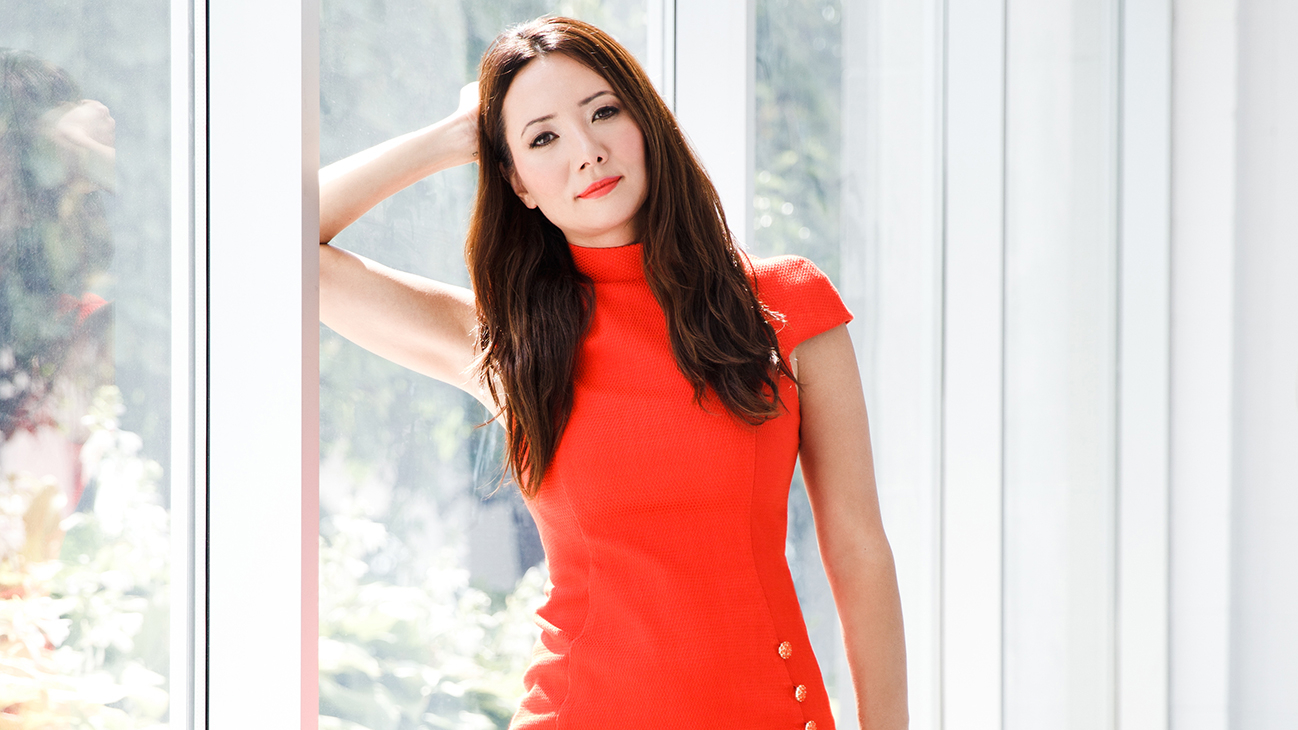 I talked with Ziya Tong, the Canadian television host and author of The Reality Bubble: Blind Spots, Hidden Truths and the Dangerous Illusions That Shape our World, while we were both in England in early February. Her interview with actor and activist Russell Brand was going viral on Youtube, and she told me how she'd talked with Rowan Hooper of New Scientist and appeared on the BBC World Service. She gave talks at the AllBright Club, the How To Academy and Google. In Bristol, she spoke at the Festival of Ideas. The events were almost all sold out.

“All these great events, it's been really exceptional for a first-time author. It's really hard to get published in the U.K. when you're a foreign writer that nobody's heard of," Tong told me.

This week's guest on #UnderTheSkin is the incredible science communicator @ziyatong. Ziya is author of "The Reality Bubble".
Listen this Sat 25th January only on @hearluminary pic.twitter.com/zjpMZngpwW

Tong, who was born in England and grew up in Hong Kong, said she developed her love of science during her 17 years as a Canadian science journalist and reporter, working for the CBC, CTV and as co-host of the Discovery Channel’s Daily Planet. As an interviewer, she said she met every “ologist” imaginable, and was able “to see the world through different people’s eyes … a bit like a dragonfly.” But it was her first encounter with Jane Goodall that really inspired her.

She was 21 when Goodall told her to follow her dreams. And she has.

“The book actually took a year to write,” she said, “but thinking about the book took about five years because there was so much in it, and I really didn't want to write a quote-unquote environmental book. I really wanted to come at it in a different way and enchant people with awe and wonder.”

The book’s appeal is similar to a well-produced television documentary, a mix of entertainment (or awe), drama and information. Tong’s language and storytelling abilities are light-handed even when the content is heavy. The book seems to cover almost everything: science facts, ideas, history, technology, physics, politics, human interest stories, animal exceptionalism, galactic visions, data collection, dinosaurs, microbes, slaughterhouses, pollution, bull semen, human waste and more — like a rollercoaster ride through a science house of mirrors. It’s pop science at its best.

Tong said the book has been referred to like the red bill taken by Neo in "The Matrix". But it is also like a matrix, or a set of conditions that provides a system in which something develops. But, in order for those conditions to exist, Tong believes our vision must be clear.

“Scientists have found that our brains will shut down information that doesn’t make us feel good, or that causes us stress, which is one reason why we tune out suffering,” she writes. Tong asks the reader to look no matter how hard it is, to burst the reality bubble, a psychological term referring to a human ability to create a perception of reality in order to carry on with life as it’s known.

The Reality Bubble has been praised in Canada, where it was published last year by Penguin Random House. It was shortlisted for the RBC Taylor Prize (Tong donated the entire $5,000 cash prize to Extinction Rebellion Canada in defiance of RBC's financing of fossil fuels globally). Launching in the U.K. was a natural next step. Her international publisher, Cannongate, has already translated the book into “quite a lot” of different languages, including Lithuanian (it’s on the shelves in Lithuania), Portuguese and Taiwanese.

At moments, Tong’s excitement explodes off the page. She describes fascinating phenomena, such as intergalactic transfer, which involves supernovas ejecting atoms into other galaxies (meaning that approximately half the matter that makes up our bodies is from another galaxy). Elsewhere, in a discussion of the construct of a battery with lithium, we learn that the largest deposit of lithium lives under Bolivia’s Salar de Uyuni, a giant salt flat, over 10,000 square kilometres. From space, the Salar de Uyuni looks like a mirror reflecting the stars. Or the story of two astronomers in Paris who set off, one going north and one going south, to measure the world. The year was 1792. They would survey from Dunkirk to Barcelona and, using those measurements, extrapolate the distance from the equator to the North Pole. Now, based on satellite measurements, it’s known that their estimate was off by only a couple kilometres.

But there are darker stories, “ah-ha” moments followed by “uh-ohs” moments.

“The creep of catastrophe nears day by day, and yet when we reach out our arms … it is only to take another selfie,” writes Tong.

“The things that live in the soil are too small to care about; climate change is too large to imagine,” says English writer Helen Macdonald, who Tong quotes.

At the beginning of the book, Tong shines light on “scale blindness”, which manifests as a blindness to the nonhuman-sized, the minuscule and gargantuan — from microbe to universe.

In perhaps the book’s most metaphysical section, Tong delves into the science that tells us our bodies are not separate and distinct from the outside world. “There is no place that our bodies end and the world begins,” she writes. What we consider solid may be an illusion. For instance, neutrinos pass through our bodies every second; X-rays see inside of us. In other words, different kinds of radiation have different abilities to penetrate the body.

While things unseen move through us, they are also what we’re made of. “Every life on earth, every body is born from a galaxy of explosions,” she writes. “At a subatomic scale the world around us is in a constant dance of interchanging particles.”

Humans think they are exceptional, but Tong not only explores other animal complexities (there are 8.7 million species), but also asks the reader to imagine looking at the world from other species' points of view.

A common pigeon, we learn, can distinguish each letter in the alphabet, recognize words, tell the difference between a Picasso and a Monet painting and diagnose cancer with near-perfect accuracy. Bees, golden eagles, pythons, hammerhead sharks, dung beetles, dragonflies, bats, toothed whales, prairie dogs — each species has unique sight, navigation, hearing and communication abilities that we would never guess at without scientific observation. Dolphins can hear babies in pregnant women’s womb. Dung beetles never get lost. A chimp at the Primate Research Institute at Kyoto University has a photographic memory. An African grey parrot named Alex recognized himself in a mirror but didn’t know the name of his colour and asked his handler. That day, Alex learned the word “grey”.

One remarkable story follows the next until Tong writes, “The idea that animals are subhuman, that they lack awareness and intelligence, that they are inferior, has led us to treat them as though they are not only property but biological machines.”

“We live in these major natural cycles of birth, death and rebirth,” said Tong tood me. “And that's what the food-energy-waste cycle is.” Cycles, she claims, we’ve hijacked.

The second part of The Reality Bubble abounds with what Tong calls “societal blind spots,”including cruelty toward animals raised and killed to feed us, soil degradation, rapid declines in water reserves, the imminent failure of old power grids, the history and science of various energy sources, and the historic and contemporary uses of waste.

While we use massive quantities of oil each day, Tong believes many of us have no idea where it comes from or why so much resides in the Middle East. Climate change books often address power struggles surrounding oil, consumption and depletion, and the effects of CO2 and other pollutants. Tong examines these topics as well, but she includes another oil story that dates back to the mid-Cretaceous period.

About 94 million years ago, the planet was mostly ocean and much hotter.

An anoxic event occurred in waters near what is today the Middle East, causing what geologist and oceanographer Dorrik Stow calls the “Black Death.” Marine and plant life died; bacteria slowly broke down; and carbon remained. The dead sea life was buried under the ocean floor, compressed and cooked for millions of years. “That’s what oil is: dead stuff,” writes Tong. Another way to see it: “the average tank of gas holds what used to be more than one thousand tons of ancient life.”

By exhuming and burning this prehistoric graveyard of fossil fuels, Tong explains, “45 percent more carbon dioxide is unleashed into the atmosphere than would naturally be there.” Air pollution is just one kind of garbage humans create. Tong shows that the ocean, soil and space have all been invaded by our debris.

In the last section, Tong slides into the political sphere, from the genesis of land ownership to urbanization, displacement and real estate booms. “In our era, excess is necessary. That’s because the economy relies on growth, and growth relies on producing, consuming, and discarding ever more stuff,” writes Tong.

The most valuable resource today, argues Tong, is not oil but data, which is collected and sold on data management platforms. Surveillance is everywhere, the most pervasive in England where there is about one CCTV camera for every 10 people. In the U.S., three-quarters of all employees are being watched, and in China, brains are being monitored. Brain surveillance “is turning human workers into machine,” Tong writes.

“It is illegal to look too deeply at where our food comes from, and the same is true of energy and waste systems. Business and government can spy on us, but we are forbidden to spy on them,” she writes.

“The philosopher and economist David Hume famously remarked in 1741 that ‘nothing appears more surprising … .than the easiness with which the many are governed by the few.’… We take orders,” writes Tong, “because our lives have already been ordered in ways that we rarely think about.”

Our blindness is part of a system, she argues in the book. We are kept blind, a consequence of surveillance, data collection, consumer targeting and pressure to consume. It’s as if we are the mice on a treadwheel, running to shop.

Tong quotes Bertrand Richard, who wrote that, faced with “climate chaos, stock market panics, food scares, pandemic threats, economic crashes, congenital anxiety, existential dread, we do not slow down. Instead we do the exact opposite: we put the pedal to the metal and increase our speed.”

The day after I spoke with Tong, both the Guardian and the Washington Post featured articles about how constant climate change chatter combined with its lived effects is traumatizing youth.

Tong pops the false reality bubble, hoping that we will see things differently before it's too late. Like the fleas she describes in the first chapter that can leave their lidless jar but have been conditioned to think the jar is shut, we need to realize there is no lid and jump out to a new reality.