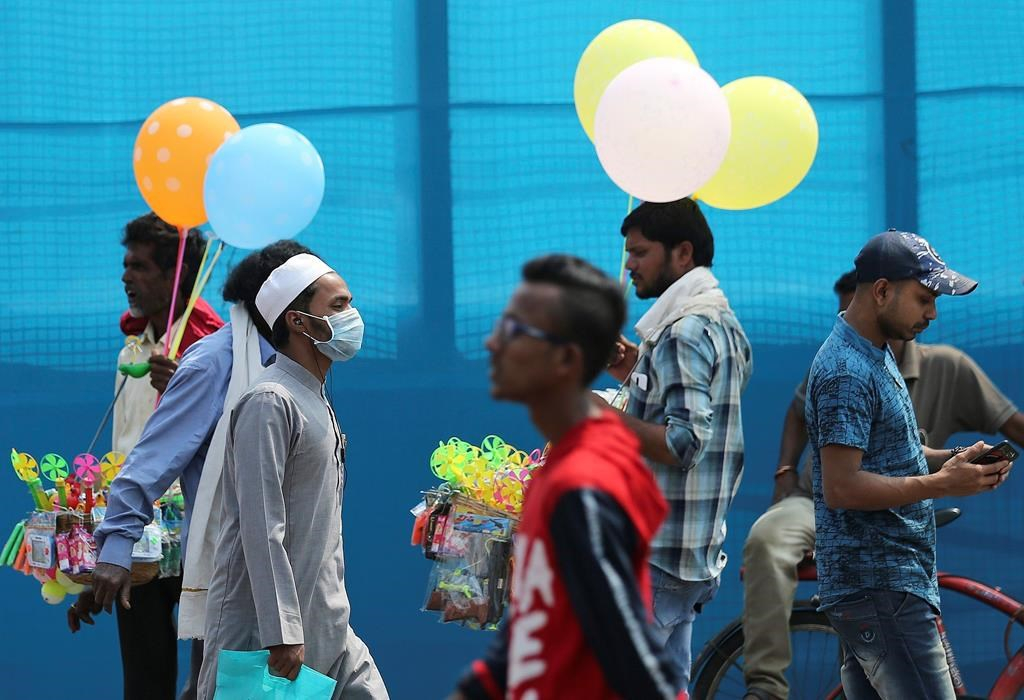 An Indian wears a mask and walks on a street in Hyderabad, India, on Thursday, March 5, 2020. File photo by The Associated Press/Mahesh Kumar A.
Previous story

The economic affects of the coronavirus have preceded the spread of the virus itself, with financial markets swinging wildly, companies closing offices or asking employees work from home in affected areas, and throttling air travel across the globe. Following is a brief look at how things are changing in the economy and the workplace today as the outbreak widens.

AIR TRAVEL: An industry group says the spreading coronavirus could cost airlines as much as $113 billion in lost revenue. That figure, released Thursday, is four times the number released just two weeks ago by the The International Air Transport Association, which is imploring governments for assistance. The group says the industry urgently needs help from governments in waiving some requirements and fees.

Southwest Airlines cut its revenue expectations for the quarter by $200 million to $300 million. “In recent days, the company has experienced a significant decline in customer demand, as well as an increase in trip cancellations, which is assumed to be attributable to concerns relating to reported cases of COVID-19," the company said Thursday in a regulatory filing.

The struggling British airline Flybe collapsed Thursday as the outbreak quashed ticket sales. The regional airline narrowly avoided bankruptcy in January, but the spread of the coronavirus sealed its fate, left passengers stranded, and is now threatening the viability of regional airports across the U.K.

Smaller carriers are particularly at risk. The low-cost carrier Norwegian Shuttle cancelled 22 long-haul flights between Europe and the United States from late March to early May. The national carrier Finnair is laying off its entire staff based in Finland for two weeks to a month due to the economic impact of the outbreak.

ADRIFT: The Centers for Disease Control and Prevention is investigating a “small cluster” of patients with the new coronavirus in Northern California who were passengers of a Grand Princess cruise ship that travelled from San Francisco to Mexico in February, including a Placer County resident who died at a hospital Wednesday. It was the first death from the COVID-19 virus in California.

The Grand Princess' chief medical officer says the ship is at sea off the coast of Mexico and will skip a scheduled stop in Ensenada and return directly to San Francisco, where CDC and cruise officials will meet to determine the next course of action. He said guests who sailed on the Feb. 11-21 voyage and are currently on the ship need to remain in their rooms until they are cleared by medical staff.

The ship is expected to dock in San Francisco Thursday.

Shares in Carnival Corp., which owns Princess Cruises, fell more than 14% Thursday and have lost 45% of their value since the beginning of 2020. Shares in other cruise line operators were also hammered. Royal Caribbean fell 16.3% and Norwegian dropped 13.4%.

MALLS: Already teetering due to a drastic transformation in the retail sector, the more than 1,000 malls in the United States are bracing for a drop in foot traffic. Big malls like American Dream and Mall of America and mall owner Taubman Centers Inc. say they're adding hand sanitizer stations, and they've also stepped up disinfecting high-touch areas like doors and handrails. The International Council of Shopping Centers said its members are following guidelines from the Centers for Disease Control and Prevention.

CLOSE TO HOME: More companies are reporting workers with infections in the United States. Facebook says it’s temporarily closing a Seattle office after a worker was diagnosed with the virus. The last time the employee came to the social network’s Seattle office was Feb. 21, so Facebook said the office will remain closed until Monday, when the incubation period ends. The company has encouraged its Seattle staff to work from home until March 31.

Amazon this week said one of its employees in Seattle, and two in Milan had contracted the coronavirus. All were quarantined. The company told told its Seattle area employees to work from home if they can. Around 50,000 people work at the online retailer’s Seattle headquarters or its nearby offices in Bellevue, Washington.

Washington state has become a hot point, with most of the deaths in the U.S. being reported in a cluster there.

Microsoft asked its Seattle-area workers who can do their jobs outside of the office to do so until March 25. The directive also affects Microsoft employees in the San Francisco Bay Area. The Redmond, Washington, company said employees should still come in if they work at a data centre, retail store or other location where their presence is needed, unless they have an underlying health condition, are over 60 or fall into other categories that health authorities say pose higher risks. Microsoft asked people to cancel travel to its Puget Sound and Bay Area campuses unless it is "essential for the continuity of Microsoft." It has cancelled non-essential travel to regions where the virus is active.

ENERGY: The oil-producing countries of the OPEC cartel on Thursday called for a deep production cut of 1.5 million barrels per day to support prices that are sagging due to the spread of the coronavirus. Air travel has plunged since the outbreak emerged in China, sapping demand for jet fuel. Manufacturing has been idled in China as cities with millions of residents locked down to contain the spread of the virus. Major companies around the world have halted business travel out of precaution. Despite the proposed cut, crude prices continued to decline. They have fallen 24% this year.

MORTGAGE RATES FALL: The average rate on a 30-year fixed mortgage hit a record low of 3.29%, driven down by investors shifting money into the safety of U.S. Treasurys as the coronavirus outbreak spreads. Mortgage buyer Freddie Mac said Thursday that the average on the benchmark 30-year loan tumbled this week from 3.45% last week. The new rate is the lowest since Freddie Mac started tracking it in 1971, the company said.

The fall in long-term mortgage rates came in a week when the Federal Reserve made an emergency cut in its benchmark interest rate to aid the economy in the face of the spreading coronavirus. Fed Chairman Jerome Powell warned that the virus “will surely weigh on economic activity both here and abroad for some time."

Freddie Mac's survey of loan rates showed that the average rate on a 15-year fixed mortgage sliding this week to 2.79% from 2.95% last week. The 15-year rate is now at its lowest level since 1991.

STOCKING UP: Consumers have been flocking to warehouse stores to stock up essentials like toilet paper and non-perishable food. On Thursday, Costco reported that its February sales at stores opened at least a year jumped 12.1% from the same month last year, a surge it attributed to “concerns over the coronavirus.”