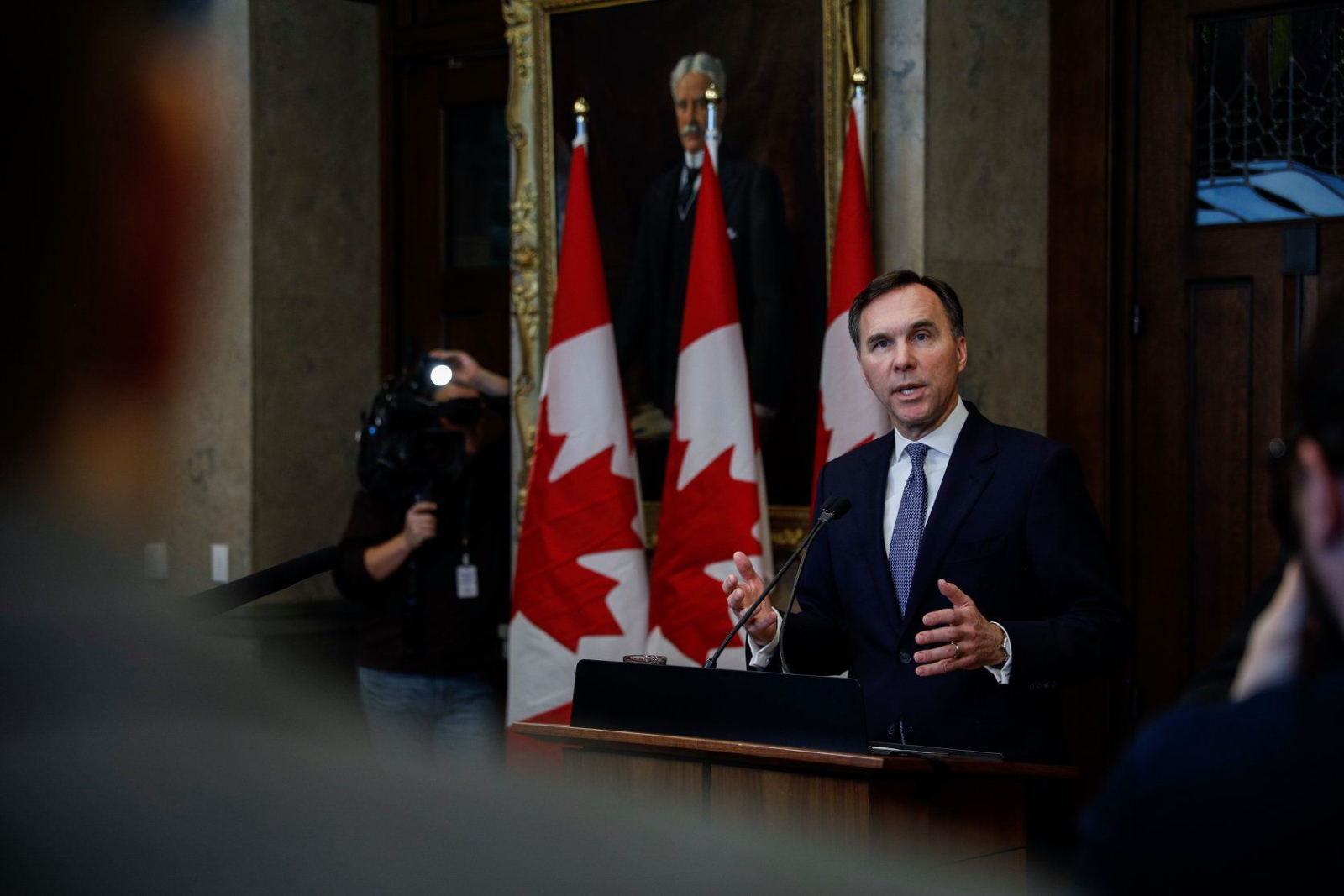 Canada’s finance minister tried to reassure jittery investors on Monday that the country’s books and banks were resilient, after a one-two punch from slowing global economic demand and a collapse in crude prices rattled markets.

His comments came just minutes after Alberta Premier Jason Kenney conceded that his province’s 2020 budget, unveiled less than two weeks ago, is “obviously going to be affected” by the pummelling taken by energy stocks.

“What I want people to know is that we have a very strong fiscal position,” Morneau told reporters on Parliament Hill. “We have a level of debt as a function of our economy that is very low. It provides us with fiscal capacity to deal with challenges.”

Kenney’s budget assumes that a key crude oil benchmark price will “remain flat at $58 a barrel in 2020-21.” Instead, that price, called West Texas Intermediate (WTI), was down over 20 per cent Monday, caught up in a massive selloff that saw trading on the Toronto Stock Exchange temporarily halted to calm panic selling after the largest drop since the late 1980s.

Oil prices took a nosedive on Monday, the worst since 1991. Some large Canadian oilpatch firms posted big declines such as Cenovus Energy, which fell over 50 per cent and Canadian Natural Resources, which dropped almost 30 per cent, as of 4:00 p.m. EDT.

“The coronavirus has caused the global economy to slow down and, with it, demand for energy to decline for the first time in over a decade,” said Kenney. “We are in uncharted territory.”

Kenney had already said last week that he believed every dollar reduction in WTI would take “about $200 million out of provincial revenues." Still, the premier said Monday he expected his budget to pass and the legislature to approve his spending plans.

Hannah McKinnon, energy transitions and futures program director for Oil Change International, said the situation meant that “high-cost producers” that are also wealthy countries, such as Canada, must invest in a just transition for fossil fuel workers.

Canada has “no excuse for missing the plot again on the volatility of global oil markets,” McKinnon said in a statement. “These countries must see the writing on the wall and respond appropriately in an era of global climate emergency. Governments have an urgent responsibility to manage the decline of the sector with a just transition that protects workers, communities, and the climate rather than desperately propping up an industry in terminal decline.”

Monday's market panic is being blamed on a potent cocktail of political and social phenomena that has been brewing for weeks.

Alberta Premier Jason Kenney conceded that his province’s 2020 budget, unveiled less than two weeks ago, is “obviously going to be affected” by the pummelling taken by energy stocks on Monday.

The spread of coronavirus has prompted record-low manufacturing levels in China, and led to travel and tourism restrictions on places like Italy. Fear of contagion is also leading to delays or cancellations of sporting events, music conferences and other large gatherings.

It has all led to a slump in demand for oil for the first time since 2009, said the International Energy Agency. Meanwhile, talks between Russia and the Organization of the Petroleum Exporting Countries (OPEC) over cutting their combined output to reflect lower demand broke down. That means they’ll be competing for market share and are now gearing up to flood the zone with cheap oil.

Morneau said he had been in “extensive discussions” with banking and energy leaders and the provinces, and was “looking at a host of things” to do in response.

“We’re seeing a good deal of anxiety,” he said after markets closed. “We are very focused on dealing with assuring people that we have our health system strong.”

The finance minister would not say when the federal budget would be released, instead noting “it’s important not to think about the budget as an event.”

Federal health authorities confirmed there are now over 110,000 cases of coronavirus in over 100 countries, including 71 in Canada. The first Canadian to have died in connection with the disease was also announced Monday, a resident of a care home in North Vancouver.

In question period on Monday, the Conservative Party sought to tie the situation to the governing Trudeau Liberals.

“Canada is on the brink of a recession,” Conservative deputy leader Leona Alleslev declared.

“Canadian stocks are crashing with the biggest drop since 1987. … When will this government abandon its failed economic policies and change course?”

Deputy Prime Minister Chrystia Freeland said the Trudeau government was examining the tools it had at its disposal.

“The coronavirus is having a serious impact on the global economy and on the Canadian economy. Canada’s strong fiscal position means we have the firepower to support our economy,” Freeland responded.

She said the government was considering measures such as “supporting workers and parents who have to miss work in order to prevent the spread of the virus, (and) supporting our excellent health care system.”

As one example she pointed to the government’s commitment to extend Employment Insurance sickness benefits to 26 weeks, from 15 weeks, that is part of Employment Minister Carla Qualtrough’s mandate letter.

The federal gov't which owns

The federal gov't which owns a central bank with sovereign currency has the fiscal capacity to fight long wars, bail out the whole financial system at times of crisis, and can certainly support the sick, the unemployed and ailing provinces like Alberta during the coronavirus outbreak and a recessed economy. A massive Green New Deal which allows for transition would be an excellent step. And hopefully Alberta politicians will stop their counterfactual sermons on how the federal gov't depends on oil revenues.

Hello Larry. This ex-Albertan won't be holding his breath on the success of Alberta's conversion therapy. I've heard the same thing (or variations on the theme) for over 50 years since I was a teen roaming the suburbs of Calgary. After the Trans Mountain BS I have concluded that Alberta will need to lie in its self-made bed for a long time before it reaches the conclusion that diversity is strength, including in the economy and tax structures. By then the Millennials will be in power. Cheers.

In times like these, as an investor, I calm myself by remembering that I own a portion of some very solid and profitable companies that are not going away. I remind myself that their worth is based not on the value of their shares, but on the unshakeable worth of their endeavours and achievements.
In the short term, my income will be affected by a recession but in the long run, my investments will recover. If they don't, it is because they were bad investments to start.
I say this, conscious of the fact that my employment is not at stake and as a nation we must assure those most vulnerable in a recession that we have their support in top of mind.

“…Premier Jason Kenney conceded that his province’s 2020 budget, unveiled less than two weeks ago, is “obviously going to be affected” by the pummelling taken by energy stocks.” […]

“Kenney’s budget assumes that a key crude oil benchmark price will “remain flat at $58 a barrel in 2020-21.” Instead, that price, called West Texas Intermediate (WTI), was down over 20 per cent Monday, caught up in a massive selloff that saw trading on the Toronto Stock Exchange temporarily halted to calm panic selling after the largest drop since the late 1980s."

This dovetails with the damning central editorial piece in the March 5th Globe and Mail, aptly entitled “An Alberta budget still betting on oil”. It reiterates the fact that Alberta habitually spends 100% — sometimes more than 100% — of its oil revenue in order to maintain a low-tax regimen. In other words, it subsidizes its public services and programs with a yo-yo in revenue from a non-renewable resource controlled by outside forces. How smart is that?

Norway, by comparison, has a similar population base and is a producer of high-cost unconventional oil, like Alberta (for a shorter time frame at that), but it banked its oil revenue while maintaining a high domestic tax regime. The Norwegian Sovereign Wealth Fund now tops CAN$1.3 trillion. As the result, it has guaranteed its fiscal and social stability through the long-range future, which will in no doubt be demonstrating increasing international downward pressure on oil demand through emerging renewables and restrictive climate policy. Moreover, the Norse are happy paying higher taxes, according to the polls, and obviously make the connection between taxes and quality of living.

The Globe quoted Alberta’s own budget data on tax comparisons with other provinces, something that has always routinely been used by braggart politicos in that province to pummel other jurisdictions, but turned the table back to scold Alberta for being so foolish. If Alberta had the tax revenue of the next lowest tax regime (Ontario), it would have a $14.4 billion surplus. If Saskatchewan’s or BC’s tax structures were adopted, Alberta would be in the black by $15.1B to $17.5B respectively. Instead, it has chosen a decades-long path in subservience to a single industry to boast when times are good, and lash out like evangelical TV screamers blaming everybody else when the inevitable bust occurs.

Boom-bust vs. stability. Which is the wiser path? A simple and very reasonable sales tax is seen by some ideologically impaired folks as the work of the devil. But most others see it only in neutral colours as a normal stabilizing force on the predictable variations of the economy.

Now, with the coronavirus tanking international oil prices and the entire global economy, Alberta will likely have to assume — gasp! — more debt. But obviously not before several more rounds of Whine & Blame while demanding handouts from Ottawa for all the wealth it has “transferred” to the nation over the decades, no mind to the $12+B Ottawa has already committed to Alberta with Trans Mountain pipeline. This is not to mention the outrageous real wealth Alberta government has transferred to their oil industry donors by giving away the people’s resource in raw form at bargain basement prices without any notion of practicing more of the principle of value added.

I wonder when Canadians will finally tire of these economically-delusional shenanigans and demand that Alberta either holds that referendum, or shuts the you-know-what up.