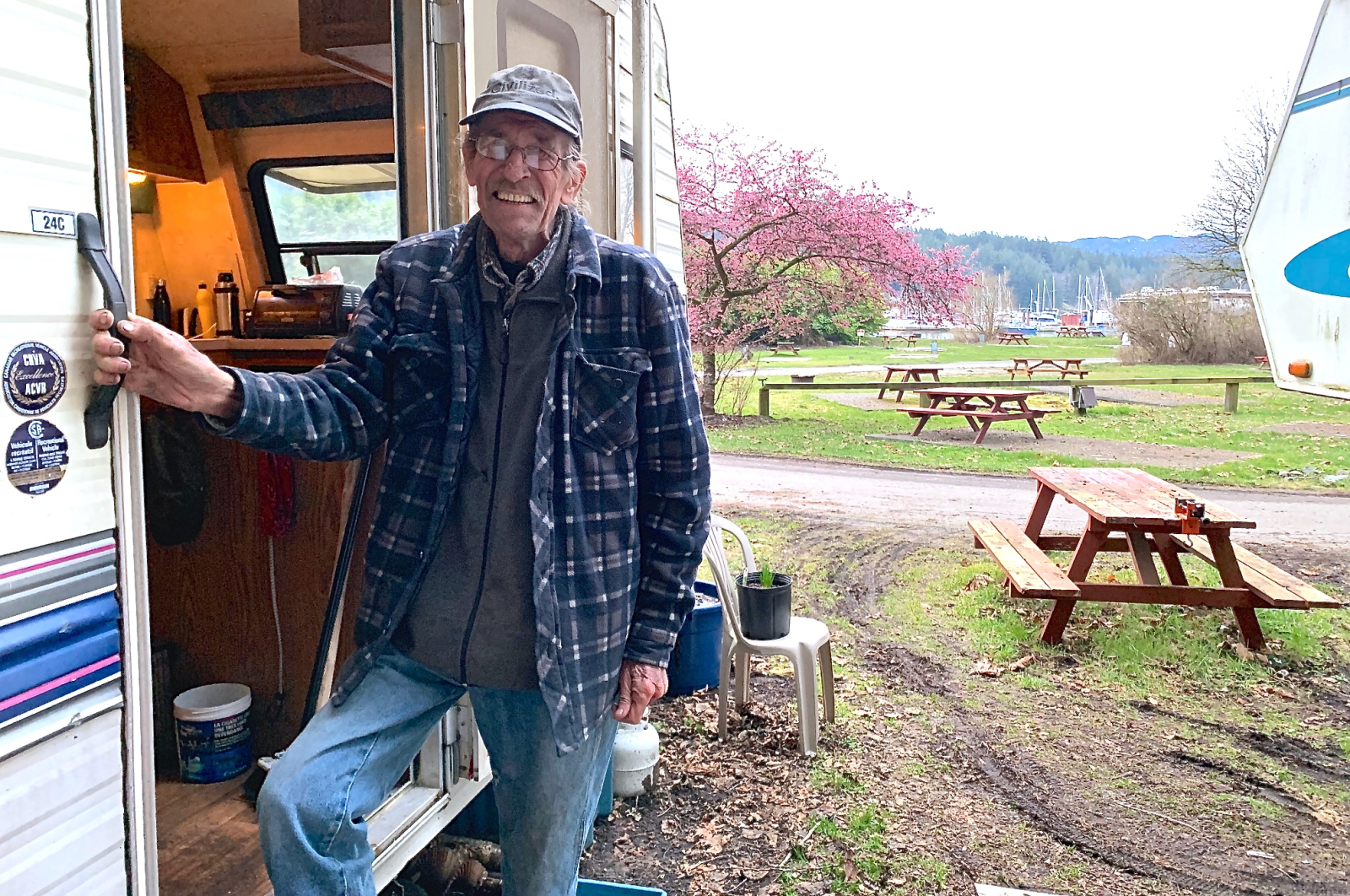 Derik Kidd, 71, is looking forward to moving out of his trailer and into Quadra Island's new seniors residence.
Previous story

Quadra Island resident Derik Kidd is grateful his small community has strived for years to create a new seniors village so that he and other elderly residents can remain on the rock they call home.

Kidd, 71, has a gravelly laugh and has to take a deep breath to speak.

Known to locals by the moniker Dak, Kidd is a polio survivor who is also battling chronic obstructive pulmonary disease (COPD).

He suffers from shortness of breath, fatigue, joint pain and mobility issues, and for the past 12 years he’s been living in a 24-foot travel trailer in an RV park in Heriot Bay.

While the trailer met his needs in the past, he’s finding it harder and harder to make his living situation work as he ages and his health declines.

But Kidd considers himself lucky.

This spring he’s slated to move into a sparkling new, purpose-built seniors housing project in the heart of Quathiaski Cove.

So, despite a serious shortage of housing on Quadra for seniors, he won’t have to move off island.

Just before Christmas, he got the news he’d been selected to live in the residence. More recently, he found out he’ll move into his unit just before his birthday in May.

“This opens up a whole new ball game for me. It’s going to make my life easier, healthier and safer,” says Derik Kidd, 71, about Quadra Island's new seniors' residence.

“I’m getting all sorts of presents this year,” he said.

Maureen McDowell, QISHS board president, said the residence, currently under construction, is scheduled to be open for tenants June 1.

The project’s objective is to provide appropriate housing coupled with community support services to allow elderly residents to remain on Quadra in the company of their family and friends, McDowell said.

“We’re not an assisted-living home but rather an independent landlord providing housing … helping connect residents to community resources they need,” she said.

The idea for residence was generated in 2015 during discussions within the Quadra Circle, which provides resource information to seniors and their families.

“We were thinking of our own future and of a place for seniors who couldn’t manage their own care, but wanted to find a way to stay on the island,” McDowell said.

Quadra, which has fewer than 3,000 residents, is part of the Discovery Islands archipelago wedged between Vancouver Island and B.C.'s mainland.

It became clear how dire the need was for a seniors' residence after the QISHS commissioned a housing survey in 2016 that garnered 600 responses from homeowners, renters and businesses on the island, McDowell said.

“The data suggested we could build three more projects of this nature and still not scratch the demand,” she said.

There are already 25 people on a waitlist to get into the new housing project.

One factor driving the demand is demographics.

Seniors make up a significant portion of the population on Quadra, and many other residents are on the cusp of joining their ranks, McDowell said.

The median age on the island is close to 57 years old, significantly higher than B.C.’s median age of 43. Additionally, close to 29 per cent of the population is aged 65 and over, compared with the provincial rate of 18 per cent and 17 per cent nationally.

Although more pronounced, Quadra’s demographics are reflective of the demographic change occurring nation-wide.

Seniors are the fastest growing age group in Canada, according to a 2019 report on seniors housing needs by Employment and Social Development Canada (ESDC).

They are expected to make up 24 per cent of Canada’s population by 2036.

The other problem is a critical shortage of affordable housing on the island, particularly housing suited to the needs of seniors, McDowell said.

Those with health challenges or mobility issues may struggle to manage stairs in cabins or properties, or they live a significant distance from medical services or necessary amenities. But often seniors are living in housing that is simply inadequate on any level, she said.

“Some seniors we’ve talked with are living in a van or cabin with no insulation, so winter is especially difficult,” McDowell said. “Some places don’t have indoor plumbing or water, but most just talk about how cold their rentals are.”

The housing problem is worse in the summer when some landlords prefer to rent at a premium to tourists, and seniors have to scramble to find other accommodations in the meantime.

“They may have to leave and find other places to stay to until the tourists are gone,” McDowell said. “Some live in tents or vans, or stay with friends or family for a short time. It really varies.”

A quarter of the country’s seniors live below the Canada Mortgage Housing Corporation’s (CMHC) standard for adequate, affordable or suitable housing, according to 2016 census data.

Seniors who rent, live in apartments or alone were more likely to be in inadequate housing, with elderly women being particularly vulnerable.

In fact, 57 per cent of women aged 65 or over who lived alone resided in inadequate housing and couldn’t afford to find alternatives.

Kidd said a major reason he applied to live at the seniors’ residence was the cost.

“It’s near impossible to find the space I need now at a rent I can afford,” he said.

“That’s just too much for me. It puts me in jeopardy,” said Kidd, who relies solely on his federal pension and old age security for income.

The rent for the one-bedroom suites with a den and patio at the QISHS residence will run $715 a month including heat.

Kidd figures the rent is fair given the central location and the amenities on offer. The housing is located within walking distance to medical clinics, the pharmacy, ferry terminal, shopping and library in Quathiaski Cove. Units are wheelchair-accessible and there will be a multipurpose area with a communal kitchen, dining area and living room built into the compound.

“It opens up so many possibilities,” said Kidd, who currently depends on friends or volunteers to transport him across the island to medical appointments. “It’s all set up so it’s easy to use for people with disabilities.”

Kidd says he appreciates the massive effort the Quadra community and QISHS board have made the past five years: “The whole island has put so much into this project and will be happy to see it come to fruition.”

McDowell agreed, noting the community raised $200,000 over the course of one summer, allowing the QISHS to buy the 2.4-hectare plot on 688 Harper Road for the project.

“There’s definitely an overall excitement at seeing the whole thing come together,” she said.

Kidd has no doubts his move into the new complex is going to change his life for the better.

“This opens up a whole new ballgame for me. It’s going to make my life easier, healthier and safer,” he said.

The QISHS is holding fundraiser for the seniors' residence Saturday, March 14 at 7 p.m. at the Quadra Community Centre.

This is similar to the

This is similar to the Seniors Housing Project in the Slocan Valley of BC. Bravo to these communities.