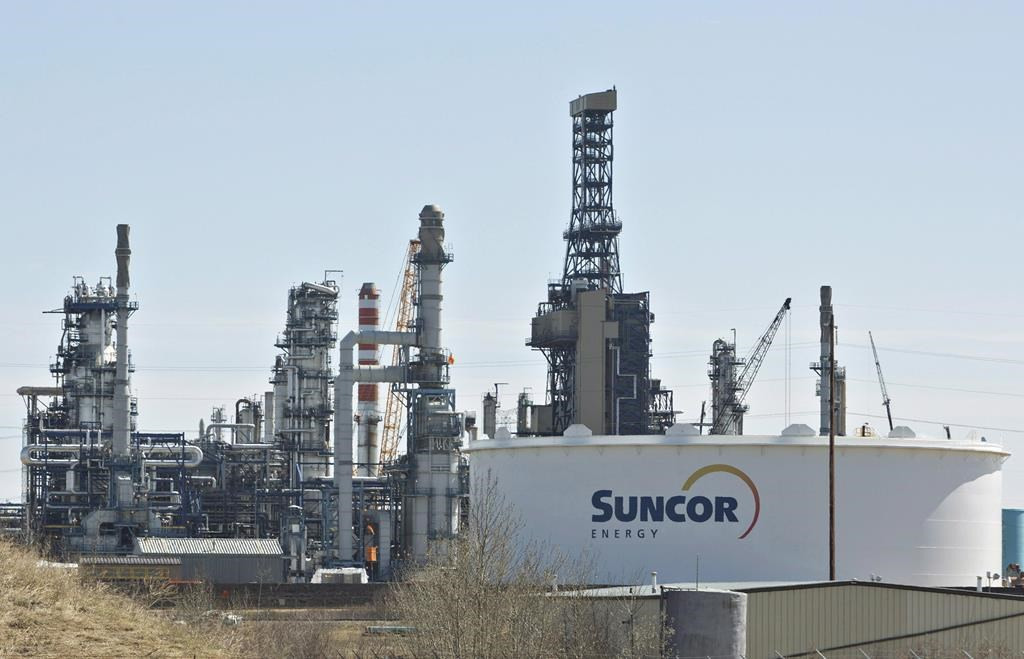 The Suncor Refinery in Edmonton is seen on Tuesday, April 29, 2014. File photo by The Canadian Press/Jason Franson
Previous story
Next story

Oilsands giant Suncor Energy Inc. is putting projects on hold and cutting its 2020 capital budget by 26 per cent to deal with lower oil prices linked to a market share battle between Saudi Arabia and Russia, as well as lower demand for fuel because of the COVID-19 pandemic.

The Calgary-based producer, refiner and operator of Petro-Canada service stations is slashing its 2020 capital spending budget by $1.5 billion to a range between $3.9 billion and $4.5 billion.

"The simultaneous supply and demand shocks are having a significant impact on the global oil industry," said Suncor CEO said Mark Little in a statement late Monday.

"We are adjusting our spending and operational plans to be prepared in the event the current business environment persists for an extended period of time.”

"We have made some decisions to defer some work and some of these decisions will have an immediate impact on our contractors and will potentially impact some employees," said spokeswoman Erin Rees in an email.

"We take our commitment to put people first to heart and we don't make these decisions lightly."

In view of low bitumen prices, it plans to go from two production trains to one at its Fort Hills oilsands mine and will delay returning its MacKay River thermal oilsands project to service until May after it was shut down in December due to an operational problem.

"Overall, the corporate update shows more aggressive reductions in capex and production than we had made in our preliminary estimate adjustments a couple weeks ago," said CIBC analyst Jon Morrison in a report.

"Albeit, this is unsurprising as the macro market has deteriorated since that time."

As a result of spending deferrals, Suncor is pushing back its medium term target of adding $2 billion in incremental annual free cash flow improvements from to 2025 from 2023.

Suncor says some projects are being shelved for up to two years, including a $1.4-billion plan announced in September to install two cogeneration units at its Oil Sands Base Plant in northern Alberta that would have reduced greenhouse gas emissions.

The company is also halting work on a new $300-million wind power plant in southern Alberta approved in December.

Despite the deferral, Rees said the company remains committed to its goal of reducing the greenhouse gas intensity of its operations by 30 per cent by 2030.

On Sunday, Husky announced it would suspend major construction work on the West White Rose Project off Newfoundland.

Suncor has a 26 per cent interest in the project, which is about half completed and was expected to produce 75,000 barrels per day of oil when on stream in 2022.

Construction of connecting pipelines to enhance synergies between Suncor's Base Plant and nearby Syncrude oilsands operations are to proceed, along with the deployment of driverless haul trucks at Fort Hills.

Suncor says it will reduce total operating expenditures across the business by more than $1 billion this year, versus $11.2 billion of expenditures in 2019.

It said it expects generally lower demand for its refined products but has not yet adjusted guidance because of "significant uncertainty" as to how far demand will fall.