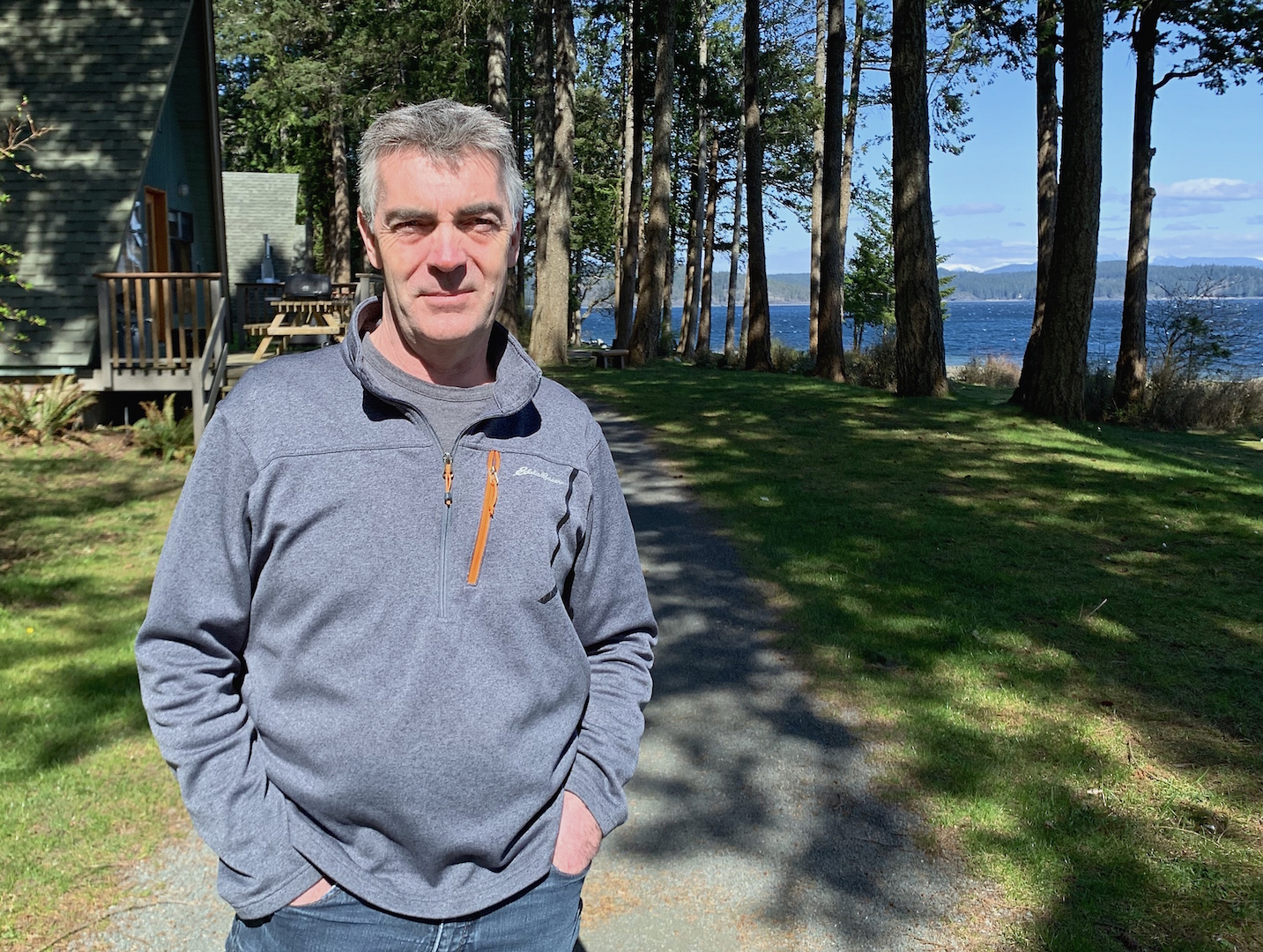 Lynden McMartin, president of the Discovery Islands Chamber of Commerce, is worried the region's coastal tourism communities will be permanently altered by COVID-19. Photo: Rochelle Baker
Previous story
Next story

Easter long weekend is usually the unofficial start to tourist season in B.C, but tourism operators are not sure they are going to survive COVID-19.

“No one is open as far as I know, and everybody is preparing for the unknown as best as they can.”

The Discovery Islands off the west coast of B.C. ­– like many of the province’s coastal destinations – are a premier eco-tourism haven for boaters, kayakers, whale watchers, fishing enthusiasts and campers during the summer months.

The region’s two most populous islands, Quadra and Cortes with approximately 3,000 and 1,000 permanent residents, can see population numbers double or triple during the high season.

Forbes Magazine named Quadra Island as one of the top seven places to visit worldwide in 2020.

But as it stands now, resorts and most tourist services on both islands are shuttered at minimum until May when the high season typically ramps up – and most are worried they won’t be open this summer at all.

COVID-19’s economic impacts to the sector are significant and will affect all residents directly or indirectly, said McMartin, who is also general manger for Taku Resort and Marina on Quadra.

“Tourism is the biggest employer on the islands collectively,” he said. “The revenues and the employment from it have spin off effects to absolutely everybody.”

Construction, housing, grocery stores, restaurants and other community businesses are all dependent in some way on tourist dollars, he said.

“It would be a catastrophe, to be blunt. We would lose close to 10 billion dollars in industry revenue, which is almost half of the forecast for 2020," - Marsha Walden, CEO of Destination BC, on COVID-19's likely impacts to tourism.

Quadra Island typically sees nearly 100,000 tourists visit annually. Of these, about half stay in lodging on the island, while the other half are day-trippers.

In the summer of 2019, a total 3,140 tourists made queries at the Quadra Island Visitor’s Booth run by the island’s old age pensioner’s organization.

“Without tourism inputs to our economy, many of the services… we enjoy would probably not be here,” McMartin said.

Taku Resort has cancelled all its reservations until May and closed the wharf to boat traffic, McMartin said. As well, many guests are also postponing or nixing their plans due to COVID-19.

To date, McMartin figures Taku has returned $21,000 in deposits, which also translates to $61,000 in lost future revenue.

The resort, which has 15 suites, a 14-site campground and marina, typically employs 12 people at the height of the season. Only one other Taku employee is at work currently with McMartin.

The remainder of staff plan to apply for the federal Canada Emergency Response Benefit (CERB) that provides people who have lost their jobs due to COVID-19 with $500 a week for up to 16 weeks.

“We’re happy the government is stepping up and acting as quickly as they did,” McMartin said. “But those supports are short-term, which is something that is probably going to have to change.”

Quadra’s five kayaking operations and other resorts such as the Heriot Bay Inn, Tsa Kwa Luten Lodge, Gowlland Harbour Resort, and April Point are all in the same dire straights, McMartin said. All the operators hope they can salvage part of the summer, he said.

Finding staff late in the season is going to be a big problem for all operators, as people may well have had to find employment elsewhere, he said.

“But many other businesses might not recover and that may free up more people to work,” McMartin said. “It’s hard to say, nobody has a crystal ball to consult, so we’re doing what we can.”

In advance of the Easter long weekend, B.C’s health officials were doubling down on their message for residents not to travel.

And on Wednesday, B.C. closed all provincial parks effective immediately as a further measure to combat COVID-19 and drive home the message that people needed to stay home during the holidays.

“The message is clear: stay home, avoid travel, do not put yourself or others at risk," George Heyman, B.C. Minister of Environment, said regarding both residents and out-of province visitors.

“We tried to provide a safe space for people to get some exercise and fresh air in our beautiful parks. But it has proven too challenging to maintain safe distance between visitors.”

The closures also meant to forestall the beginning of high season for outdoor recreation and camping, Heyman added. A ban on camping in B.C. parks has also been extended until May 31. The province’s Forestry recreation campsites and amenities are also closed until the end of May.

The closures follow statements from BC Ferries to avoid all non-essential travel and its subsequent reductions in sailings to Vancouver Island and the Southern Gulf Islands.

Many of B.C.’s small tourist communities, including Quadra and Cortes islands, have also issued pleas to visitors to stay away during the pandemic to avoid taxing local medical services and limited resources.

The measures to curb domestic travel compound the blows to tourism after flight restrictions and the closing of the U.S. border to limit international visitors.

Marsha Walden, president and CEO of Destination BC, said the repercussions of COVID-19 for the province’s tourism sector are dramatic and widespread.

“We want to acknowledge how difficult this time is for everyone involved in tourism,” Walden said.

Regardless, operators need to align behind the COVID-19 measures impacting the sector, she stressed.

“The best way out of this is to make sure we are supporting the advice of our health authorities, so this is over as soon as possible.”

As there are no concrete timelines for when travel restrictions will be lifted, Destination BC is planning for the best, likely and worst case scenarios, Walden said.

Ideally, part of the summer season could be recouped if domestic tourists can travel by July. But it’s likely restrictions will last until October, and at worst, health authorities might ask residents to delay travel for up to a year, she said.

Revenue and job losses even in the best-case scenario are chilling, she said.

“It would be a catastrophe, to be blunt,” Walden said. “We would lose close to $10 billion in industry revenue, which is almost half of the forecast for 2020.”

The losses will likely be that high due to the absence of international visitors, particularly U.S. citizens, who typically spend more than domestic travellers, she said.

Domestic tourism generally represents two thirds of the volume of visits, but only 40 per cent of the overall revenue.

The B.C. tourism sector generates $20.5 billion annually and contributed more to the province’s GDP than any other primary resource industry, according to 2018 data.

There are 19,329 tourism-related businesses and 161,500 people employed in the sector provincewide.

Destination BC has developed an action plan to deal with the coronavirus outbreak, focussing on response, recovery and resilience.

In addition to messaging that travellers stay home, the organization has complied information on government resources for tourism operators and employees, and updates on changes to the tourism sector on its website.

Destination BC is planning a significant domestic marketing campaign to encourage domestic travel once it’s safe, Walden said. Additionally, the tourism organization is looking at ways to build resilience into the future around iconic tourism destinations.

“We do not expect the world will look the same when we come out of this,” Walden said.

Both small businesses and large corporations alike will be altered by COVID-19, she said.

“We’re doing some hypothesizing right now, as is most of the industry, about what those changes will look like, and how will we build greater resiliency in that new environment.”

However, Cortes resort operators are just looking to survive in the short term.

Peter Wrinch, CEO of Hollyhock, said the resort has delayed its season until June 7, and will make further decisions regarding closures in mid-April.

“My hope is we can salvage part of our season, but that remains to be seen,” Wrinch said.

Hollyhock is one of the biggest employers on the island, with 80 hires at the height of the summer.

“We typically pay $2 million in wages that goes into the local economy, so that’s what’s at risk,” Wrinch said.

Closures this summer will have lasting effects, he added.

“Hollyhock is a non-profit organization, and often, we break even at best,” Wrinch said. “If we see this season fall apart, it means we’re really going to be behind the eight ball in 2021.”

Wrinch also worries finding employees in the coming year will be tricky.

“Seasonal work on a remote island is tenuous at best,” he said. “People will have to go off and find jobs, so we’re worried about staffing next year.”

Bill Dougan, general manager of Gorge Harbour Marina Resort, said the immediate effect of the novel coronavirus in March was positive from a revenue point.

The resort isn’t open to guests, but has a grocery store that saw a surge in sales when islanders staying at home bought food locally.

However, Dougan expects to see dramatic drops in revenue as the tourist season, which typically begins in April with boaters and drop-in guests, does not materialize.

If the resort is not open in July, he’s expecting a 60-75 per cent drop in revenue in comparison to past years.

At the height of the season the resort has 60 employees, and Dougan usually starts hiring staff in April. But he will hold at the dozen employees he’s got currently until he knows how the season will proceed.

However, since the resort didn’t lose revenue in March, Dougan can’t apply for the Canada Emergency Wage Subsidy that provides eligible employers with a 75-per-cent wage subsidy for their staff.

He wouldn’t be able to qualify for the CEWS until June, after running the month of May with significant losses. That’s if he can even find employees that late in the season and bring them online.

“What’s going to happen is a lot of businesses are not even going to open,” Dougan said.

The federal program should provide the CEWS based on an employer’s previous year's monthly payroll, so they can bring staff online without the risk of going broke to qualify, he added.

“Those wage subsidies are so imperative. Give that to me and I’ll put 30 people to work,” Dougan said. “So that I don’t lose that work force, because if I do, I’m doomed.”

McMartin fears that the islands could lose more than just tourism revenue this summer due to COVID-19.

“What I fear more than that is the effect it will have on families. People are going to have to sell homes, downsize, relocate and do whatever they need to get by,” he said.

“I think it has the potential to impact the makeup of the community on a permanent basis.”

As a fishing charter company

As a fishing charter company in the Fraser River Valley we are down to zero income for April during a time when our season is typically heating up. With no end in sight it's not looking good for so many of us in the tourism sector.

Tourism has never been done

Tourism has never been done sustainably, and it is bad for local housing, etc. It should be on conversion support only.