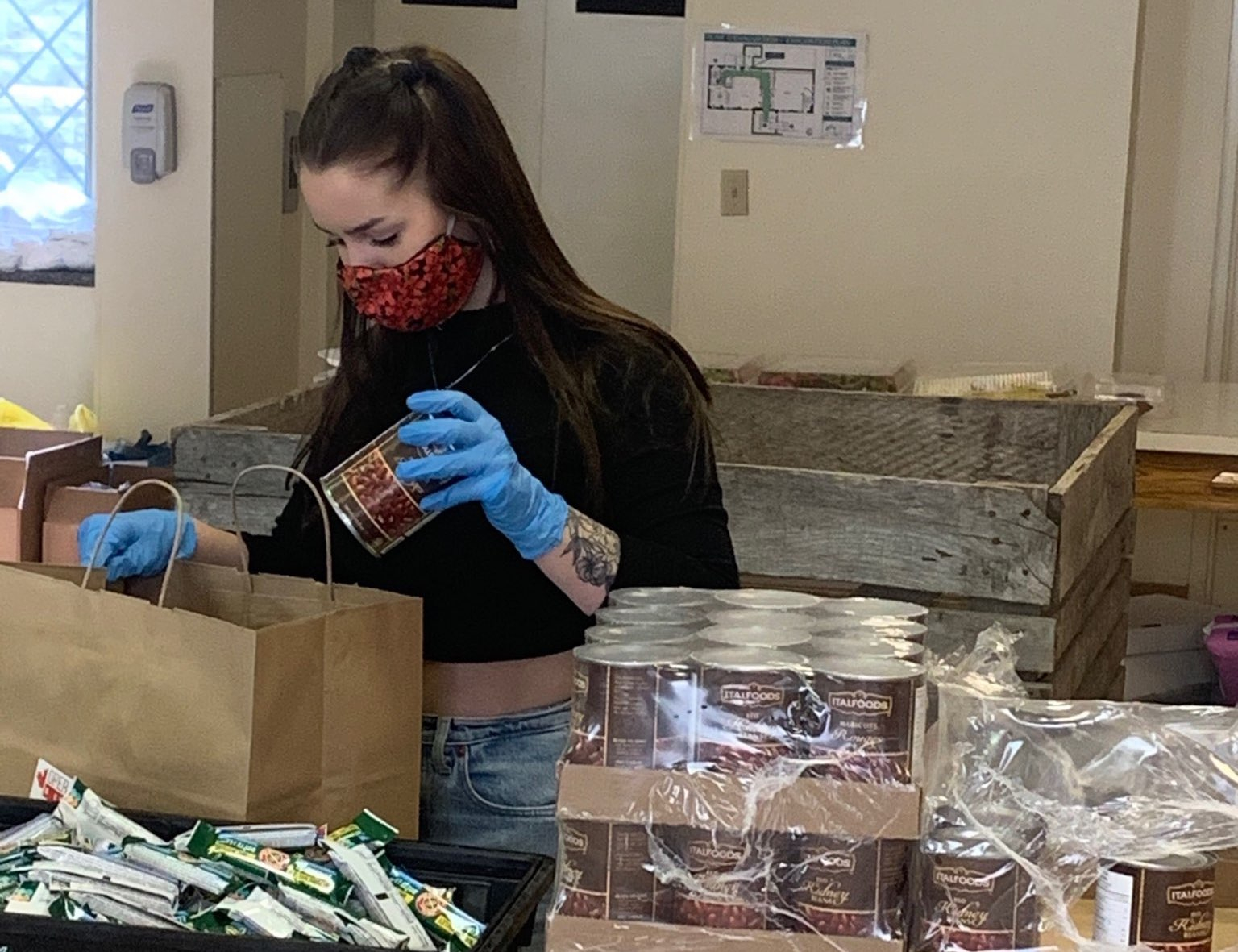 Sarah Hawkins didn’t know what she was getting into when she checked out the commotion at the restaurant across the street from her downtown Ottawa home almost a month ago.

What the 20-year-old nursing student and hospitality worker found inspired her, and she has been involved in Operation Ramzieh ever since.

“It’s given me a purpose,” she told National Observer as she took a break from packing the jumbo-sized food packages the group has been distributing to those in need in the nation’s capital. “On weekends when I have two days off, I just feel so helpless almost, because I don’t have things to do.”

Operation Ramzieh — named after the late mother of restaurant and nightclub owner/operator Abbis Mahmoud, who leads the effort — has delivered some 18,000 of these lifelines, including a big order heading for Thorncliffe Park in Toronto’s east end later this week.

The operation kicked into gear on St Patrick’s Day, March 17, and quickly outgrew Mahmoud’s Waverley restaurant on Elgin St., and then also the community centre that replaced it as packing and distribution hub. That work is now done in the convent grounds of the Hôpital Élisabeth Bruyère.

Hawkins said it was “eye-opening” for her to see the level of demand for the food hampers, which are big and varied enough to feed an adult for up to two weeks and a family for perhaps a week.

“It is very shocking, because you’d think that in a first-world country this many people wouldn’t be as desperate for food as they are,” she said.

Cathy Chen and Kamiliya Akkouche were also drawn to making a positive impact amid the global calamity.

“It’s given me a purpose,” one young volunteer said during a break from packing jumbo-sized food packages to distribute to those in need. “On weekends when I have two days off, I just feel so helpless almost, because I don’t have things to do.”

The pair, members of a prestigious global club of young leaders backed by the World Economic Forum, founded the Ottawa chapter of Students Against Corona about three weeks ago. A Montreal chapter was already up and running by then and Vancouver and Halifax chapter are also starting up.

The movement to connect volunteers with those in need sprung out of Oxford University in the United Kingdom, where Akkouche is studying. Rather than rushing home to Ottawa, she stayed to help mobilize volunteers, distribute leaflets and help at-risk people who were self-isolating.

“I thought it would be of value to bring this platform to the Canadian context in Ottawa, and adapting it to our context,” she said.

So far, she and Ottawa-based Chen have signed up 60 volunteers in Ottawa and Toronto, but faced a challenge of finding out where to deploy them.

So they have teamed up with Operation Ramzieh, feeding their volunteers into its rolling operation. They are also talking to the Adoption Council of Canada about reaching youth in foster care, and to United Way about helping the vulnerable communities they serve. The pair would like to offer tutoring for children and other services such as dog-walking, and encourage young people who can safely provide services to get involved.

“We’re seeing a lot of people coming together, despite the distance and despite having to be apart,” said Chen, who presented at three sessions at the WEF’s Davos meeting of world leaders last year. “I think emotional connection has grown stronger among a lot of people, and I’m trying to focus my efforts on that positive piece of the story.

Globally, some 2,000 volunteers for Students Against Corona chapters have completed 4,000 tasks in 20 cities.

It helps to have famous friends

For Operation Ramzieh and its hospitality executive founder, it helps to have some famous friends.

One of them is Mark Holmes, the lead singer of '80s rock band Platinum Blonde. Holmes and the band had been planning a world tour lasting much of 2020 when the pandemic struck and promoter Live Nation cancelled all tours.

Mahmoud quickly put him to work packing food boxes and delivering them, an experience the musician says has had a profound effect on him.

Now that Operation Ramzieh has more delivery drivers, Holmes is calling in his own friends.

He wants to put on a pay-per-view concert to raise funds for the group — which just got non-profit status — in Toronto in late May. He’s promising that he’s got “a lot of famous friends” who might perform at the event, saying his undisclosed lineup could conservatively be expected to draw at least 200,000 people willing to pay $10 a pop.

As an "Old" guy it is a refreshing story that gives me hope for the future of our race!