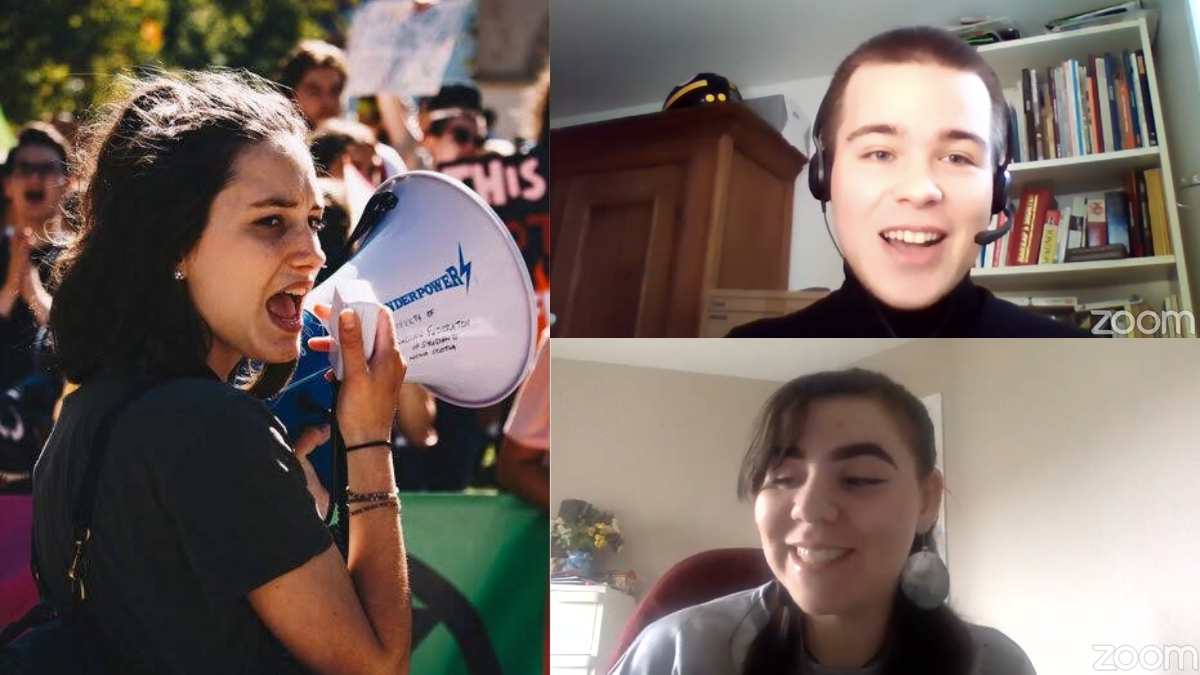 Julia Samson at a pre-COvID-19 climate rally; Albert Lalonde and Sophia Sadarous during an online discussion this week about decolonisation in the climate movement
Previous story
Next story

Climate activists around the world planned to hit the streets in big numbers this Friday. Then the COVID-19 pandemic happened.

For months, young organisers behind the Fridays for Future strikes started by Swedish teenager Greta Thunberg had been planning mass mobilizations for April 3, including in cities across Canada.

But with bans on gatherings of more than a handful of people now in force across Canada and much of the world, those plans had to be quickly recycled in the last two weeks to adapt to a very different reality.

Direct action teach-ins have turned into Zoom seminars, plans for street protests have morphed into tweet storms and digital strikes, and ”couch activism” is suddenly not a dig at those too lethargic to turn up but the best and most responsible way to protest. Synchronised noise-making from balconies and doorways (a la the Italian and Spanish responses to the pandemic) are also planned.

“Our whole strategy is based on being able to leave school and hit the streets, and those are two things we can’t do right now,” said Payton Mitchell, a Climate Strike Canada organiser. “It’s a really big challenge, there’s only so much you can do online and it’s hard to post about fossil fuel projects in the middle of a pandemic.”

The creative efforts are nevertheless a sharp downturn for the movement, which on September 27 brought hundreds of thousands of Canadians together to push for urgent action to confront the climate crisis.

“I’m going to admit, it’s disappointing,” said Alienor Rougeot, a 21-year-old university student and organiser of climate actions in Toronto. “If you were in a crowd in September, feeling that energy...and we have beautiful weather right now, just being physically in the street does a lot and it does have a huge impact.”

But she and other young organisers take comfort in the fact that staying at home is what science and scientists tell us is the way to face this crisis, which is the same primary message they seek to communicate about climate change — listen to the science.

“And in a way it’s kind of exciting because we get to do things that you don’t get to do in a normal rally — we can have more performers, a more in-depth conversation, more things people can directly do during the strike since they’re at home anyway.”

Climate activists forced to cancel a major global protest due to COVID-19 are taking a diminished version of their dissent online, with tweet storms, virtual seminars and synchronised noisemaking.

Those calls for action will include simultaneously tweeting with the #onlineclimatestrike or #digitalclimatestrike hashtags to make it a trending topic, stepping outside to make noise, and a mass texting to an unspecified provincial political office, she said.

Mitchell, the national organiser, said this moment — with the country crying out for a long-term stimulus plan to restart a battered economy — also presented opportunities for the climate movement.

“This is a really good moment right now to push for things like a Green New Deal,” she said. “People are talking about a People’s Bailout.”

While acknowledging the diminished impact their actions on Friday will have on a distracted public, young activists from across the country told National Observer that the COVID-19 crisis also allowed them to take a well-deserved break and form closer, more strategic relationships that will serve the movement well once the worst of the pandemic passes.

She has been active in the climate protest movement for more than a year now and said that she had felt burned out after having “gone and gone and gone for so long.”

“Sometimes you need to scale it back a little to continue working,” she said.

In lieu of a street protest, Samson and other activists in Halifax are pushing for supporters to flood the offices of Prime Minister Justin Trudeau, Finance Minister Bill Morneau and the local MP, Liberal Andy Fillmore, with phone messages in opposition to a $15 billion bailout that is reportedly being planned for the oil and gas industry.

“We should be bailing out the oil and gas sector workers and not the corporations themselves, especially at a time when the price of oil is less than a bucket of KFC chicken,” she said.

The Quebec student movement, meanwhile, had planned a week of direct actions that would have shut down many campuses and replaced classes with teach-ins about the climate crisis. They had to quickly pivot to online action and also adjust their messaging.

“We really don’t want to be aggressive on climate, we don’t want to take too much attention right now,” said Montreal-based Albert Lalonde from the Coalition étudiante pour un virage environnemental et social (CEVES), which loosely translates as the Student Coalition for Environmental and Social Change. “The point now is to create a spirit of solidarity.”

Still, he said the movement was merely pausing its most aggressive actions against projects such as Keystone XL and the Coastal GasLink pipeline that is being fought by the hereditary chiefs of the Wet’suwet’en First Nation, and would need to mobilise against the potential oil and gas bailout.

“We can’t restart the economy the way it was, it was doing so much harm and is not sustainable,” he said.

The cancelled Quebec sit-ins would have focused on Indigenous land rights and opposition to pipeline construction, and that focus was maintained in the online versions, including one seminar on the decolonisation of the climate movement featuring Indigenous student Sophia Sadarous.

Sadarous, a member of the Metepenagiag First Nation, is active in the Wet’suwet’en solidarity movement, which just last month was front page news as its actions shut down major rail and other infrastructure across the country.

“All news about the Wet’suwet’en has just been erased,” she said. “It has stopped being aired and being a priority for the government.”

She said COVID-19 had also given supporters of the Wet’suwet’en a chance to breathe.

“A lot of the people, the activists and protectors involved in the Wet'suwet'en conflict have been going 110 per cent strong for these past few months and the situation at hand is forcing people to take care of themselves.”

But she fears the pandemic may also risk reaching the remote territory via the CGL man camps being constructed there.

Delay is deadly: what Covid-19 tells us about tackling the climate crisis