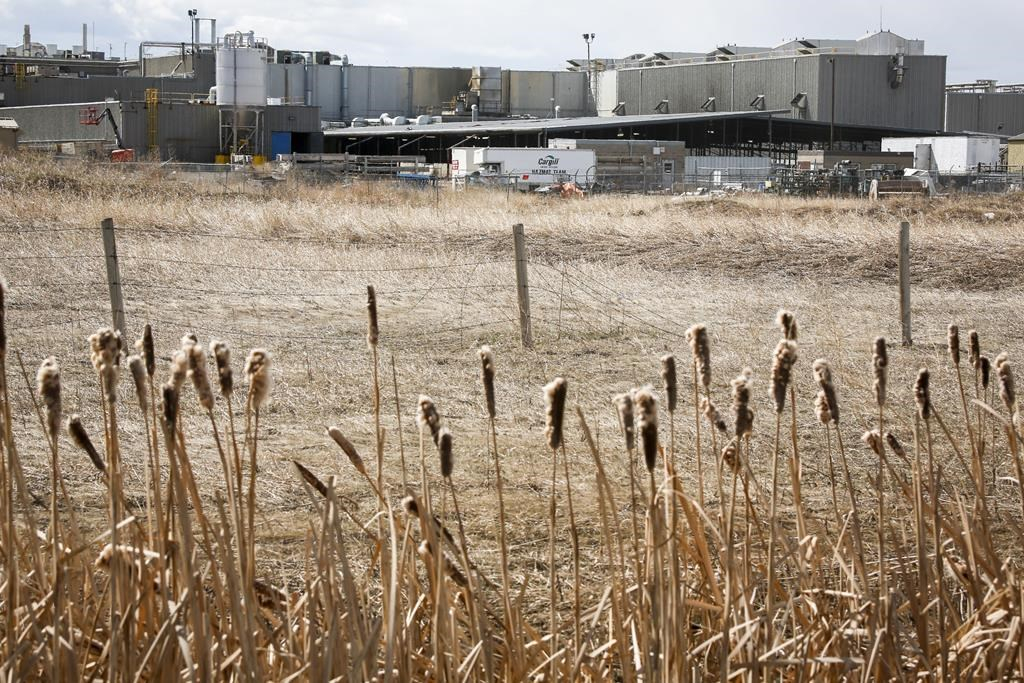 The Cargill beef plant near High River, Alta., is shown on Apr. 23, 2020. A union is trying to halt the planned reopening of an Alberta meat packing plant that has been the site of a major COVID-19 outbreak. File photo by The Canadian Press/Jeff McIntosh
Previous story
Next story

A union is trying to halt the planned reopening of an Alberta beef-packing plant that has been the site of a major COVID-19 outbreak.

There have been 921 cases of the virus at the Cargill plant south of Calgary, which has 2,000 workers.

Cargill announced April 20 it was temporarily shutting down for two weeks.

It said earlier this week that one shift would resume work on Monday with bolstered safety measures.

But Thomas Hesse with the United Food and Commercial Workers union Local 401 says workers are scared and it has sought a stop-work order from Alberta Occupational Health and Safety.

The union has also filed an unfair labour practice complaint against Cargill and the Alberta government.

Hesse said the Labour Relations Board and OHS have the power to shut the plant down quickly, and both sides are having discussions.

"The question is are they going to have the courage to do it?" he said Friday. "We're asking them to act urgently."

The union wants an independent, worker-centred investigation of both the Cargill plant in High River and the JBS Canada beef plant in Brooks, Alta., where there were 390 cases of COVID-19 as of Friday.

One worker from each plant has died.

"The same people that were saying it was safe before are saying it's safe now," Hesse said. "Would that be enough for you to risk your life?"

He said the union was not consulted about the reopening.

"I haven't received a phone call, a text, an email," said Hesse. "I haven't had a five-minute meeting. I haven't had a one-hour meeting with an OHS official, with an Alberta Health Services official — nobody."

Cargill said Wednesday it would limit access to the plant to no more than two people per car, with one sitting in the front and one in the back. It would also provide buses with protective barriers to reduce the need for carpooling.

Barriers have also been added in bathrooms and lockers have been reassigned to allow for enough spacing. Cargill said it completed a deep cleaning during the closure.

"We look forward to welcoming our employees back and are focused on our ongoing commitment to safety," Jon Nash, the North America leader for the U.S. company, said in a statement Wednesday.

"We know being an essential worker is challenging and we thank our team for working so hard to deliver food for local families, access to markets for ranchers and products for our customers' shelves."

This report by The Canadian Press was first published on May 1, 2020

Some businesses in Ontario allowed to reopen