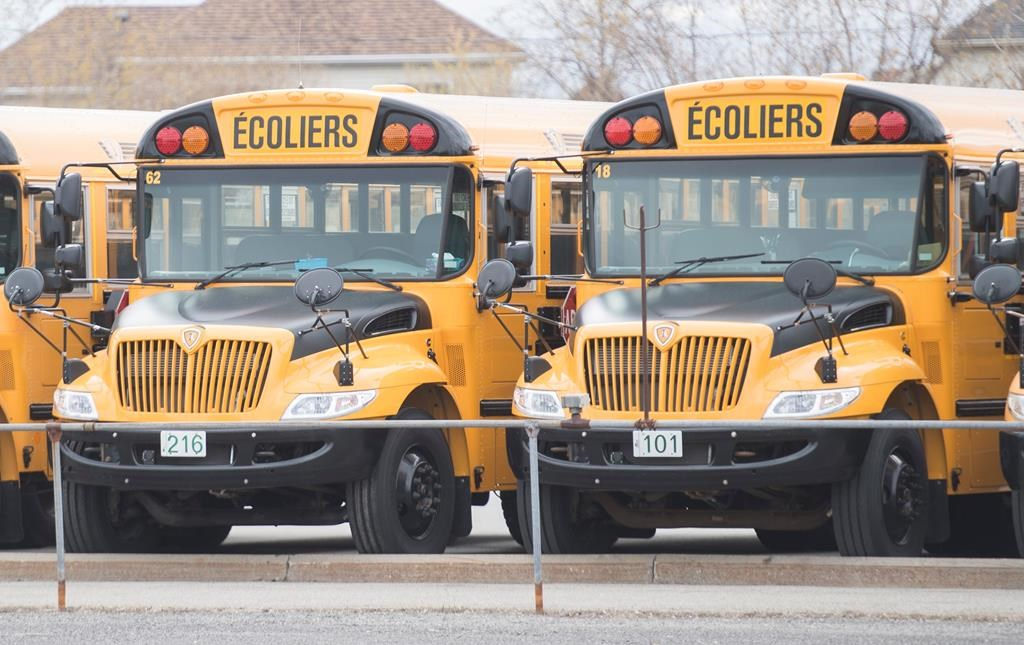 School buses are shown at a depot in Vaudreuil-Dorion, Que., west of Montreal, on Sunday, May 10, 2020. Photo by The Canadian Press/Graham Hughes
Previous story
Next story

Quebec children have begun heading back to class today for the first time since March as the province reopens elementary schools and daycares outside the Montreal area.

Quebec is the first province to open schools following the outbreak of the COVID-19 pandemic, and school officials say it will be far from business as usual.

Students are being met by staff wearing masks and in some cases face shields, and they are being told to follow physical-distancing rules and wash their hands frequently.

Libraries, gyms and cafeterias will be closed, and children will spend most of the day at their desks.

Attendance isn't mandatory, and some school boards have indicated that most parents are keeping their children home for now.

Schools in the Montreal area, which continues to be hit hard by the novel coronavirus, will remain closed until at least May 25, while high schools and junior colleges won't be back until the fall.

At Ecole St-Gerard in St-Jean-sur-Richelieu, southeast of Montreal, children posed for parents' photos on coloured dots painted on the ground outside the school to mark distancing. A school bus pulled in with a lone student aboard.

Marie Fortin watched as her twin seven-year-old daughters each received a squirt of hand sanitizer from a staff member wearing a mask. She said sending her kids to school was "important for their routines."

She said she felt reassured after seeing all the preparations done by staff, including sectioning off classrooms with tape, devising a game around handwashing, and cleaning and disinfecting.

"We don't feel unsafe at all," she said.

Marie-Claude Audet, a special education teacher, said about half the school's parents had elected to send their children. The school is bringing them back gradually, beginning Monday with kindergarten and first grade.

Quebec has faced some pushback on the decision to reopen schools ahead of any other province, despite having the country's highest COVID-19 caseload by far.

Some educators and parents have raised questions over issues such as school bus transport, staff safety and the challenges of enforcing distancing requirements in classrooms, which are supposed to have a maximum of 15 students each.

But Premier Francois Legault has defended his decision, noting the risk to young people is limited and that it's better to open things up gradually rather than all at once.

He said children, especially those with special needs, will benefit from seeing their teachers and classmates.

"Life needs to continue,'' Legault said when he announced the reopening.

He said there likely won't be a vaccine for over a year, and children can't be kept home until then.

Legault has said the situation will be closely monitored by public health officials, who won't hesitate to adjust the rules if the needed.

School in the age of COVID-19: Quebec to reopen amid rigid distancing rules

By Fran Yanor | Opinion | May 1st 2020
Coronavirus in Canada