By Graham Readfearn | News
#1349 of 1666 articles from the Special Report: Climate Change 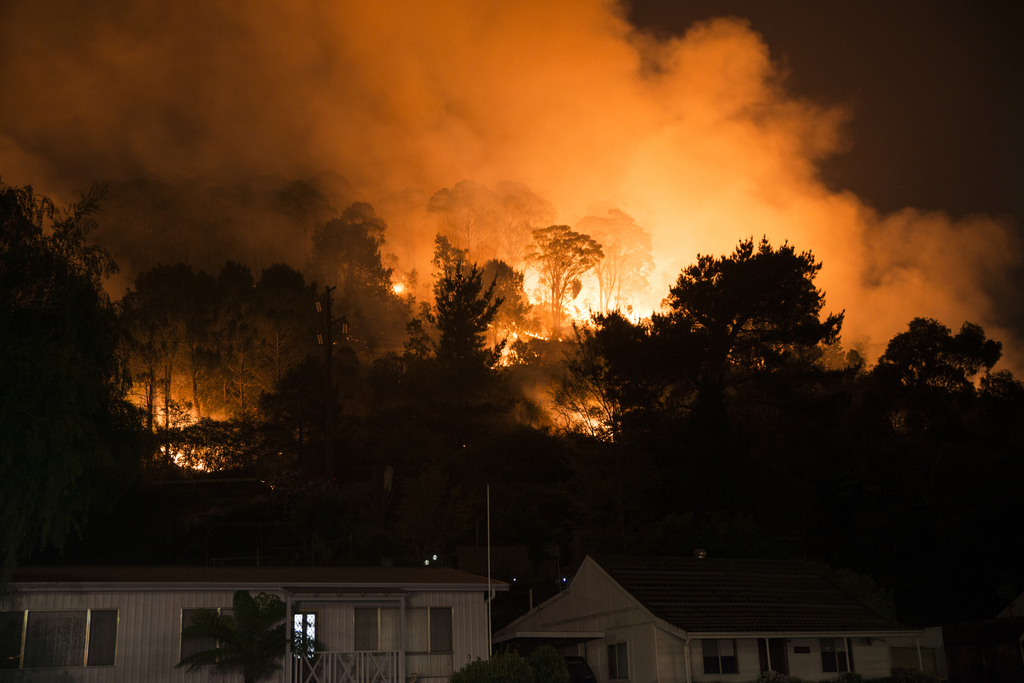 Using a ‘fast-track strategy’, fire crews could be airlifted to new fires before they became too big, a group of former fire and emergency services leaders have told the bushfire royal commission. Photo: Lithgowlights/CC BY-SA/3.0
Previous story
Next story

In a submission to the bushfires royal commission, the group said climate change was increasing the risk of extreme bushfire seasons.

New “rapid fire-detection” technologies should be trialled, with faster mid-sized and purpose-built water bombers made available to put out fires within 24 hours of them being detected.

The submission from emergency leaders for climate action, seen by Guardian Australia, includes 33 recommendations to the royal commission.

Fire crews could be airlifted to areas where new fires risked becoming too big, with faster long-range amphibious water bombers deployed in a military-style operation.

More than 20% of Australia’s forests burned during the recent fires, which destroyed thousands of homes and properties and killed at least 33 people. Smoke caused more than 400 estimated excess deaths.

The economic costs have been estimated at more than $4bn. Hundreds of endangered animals, plant and invertebrate species were affected, and some may have been driven to extinction.

Australia’s unprecedented bushfire season of 2019-20 coincided with the country’s hottest and driest year on record.

“It is not possible to ‘adapt’ to such catastrophic and escalating conditions, and they can only be partially mitigated,” said the submission, compiled by former commissioner of Fire and Rescue NSW, Greg Mullins.

“The failure of successive governments at all levels to show leadership and take credible, urgent action on the basic causal factor – greenhouse gas emissions from the burning of coal, oil and gas – will lead to further escalation in natural disaster risks.”

The submission recommended Australia develop a network of sensing technologies to detect fires in remote areas earlier, and then employ a “fast attack” approach to put them out.

Australia should trial a purpose-built water bombing aircraft long-used in other countries that can scoop up water and “achieve rapid turnaround and constant direct attack on fire fronts”.

“Every big fire was once a small fire,” he said. “It’s very much like a military operation with eyes in the sky, with your ground troops that are backed up with some artillery.”

The purpose-built water bombers were able to refuel quickly – either by skimming over large water storages or landing in paddocks – and that meant they were ideally suited to a rapid response strategy.

Firefighting experts have warned that while larger water-bombing aircraft could help control fires, they should not be seen as a “panacea” and that a suite of responses were needed.

The former emergency leaders said these aircraft had failed to make “appreciable difference to extreme fires on the worst fire weather days”.

The submission also highlighted the increasing number of large fires that couple with the atmosphere to form their own storms, creating deadly conditions on the ground for firefighters.

There had been an “astounding and deeply concerning shift in the frequency of these events”.

Hearings for the royal commission will begin on 25 May and run for two weeks. It has held 17 community forums and received more than 400 public submissions.

The final report and recommendations are due on 31 August and Dominique Hogan-Doran SC, the senior counsel assisting, said in the inquiry’s first hearing in April that it would be narrowly focused on national coordination and the “challenges associated with walking across lines drawn on a map” so as to avoid duplication with current and previous state inquiries.

“We detect a worrying consistency in the themes explored and repetitiveness in the recommendations made,” Hogan-Doran said. “This is no time to reinvent the wheel.”

The royal commission is considering recommending Australia be granted the ability to declare a national state of emergency, and released an issues paper this month calling for advice from constitutional law experts.

National state of emergency powers may also be able to be invoked during a pandemic, although the royal commission has explicitly ruled out considering matters relating to the coronavirus.

Victoria’s response to the coronavirus crisis is anchored in its state of emergency powers, which were created after the 2009 Black Saturday bushfires.

The issues paper said if the commonwealth had powers to declare a state of emergency it would be able to deploy national resources, such as the army, without waiting for a request from the states.

But it also said there were constitutional limitations in granting such a power which may mean a national state of emergency declaration would have either a limited or a very specific practical effect.

By Morgan Sharp | News, Next Gen Insider | May 14th 2020
Coronavirus in Canada