By M. Bramadat-Willcock | News | May 19th 2020
#4 of 48 articles from the Special Report: Interviews with Linda Solomon Wood 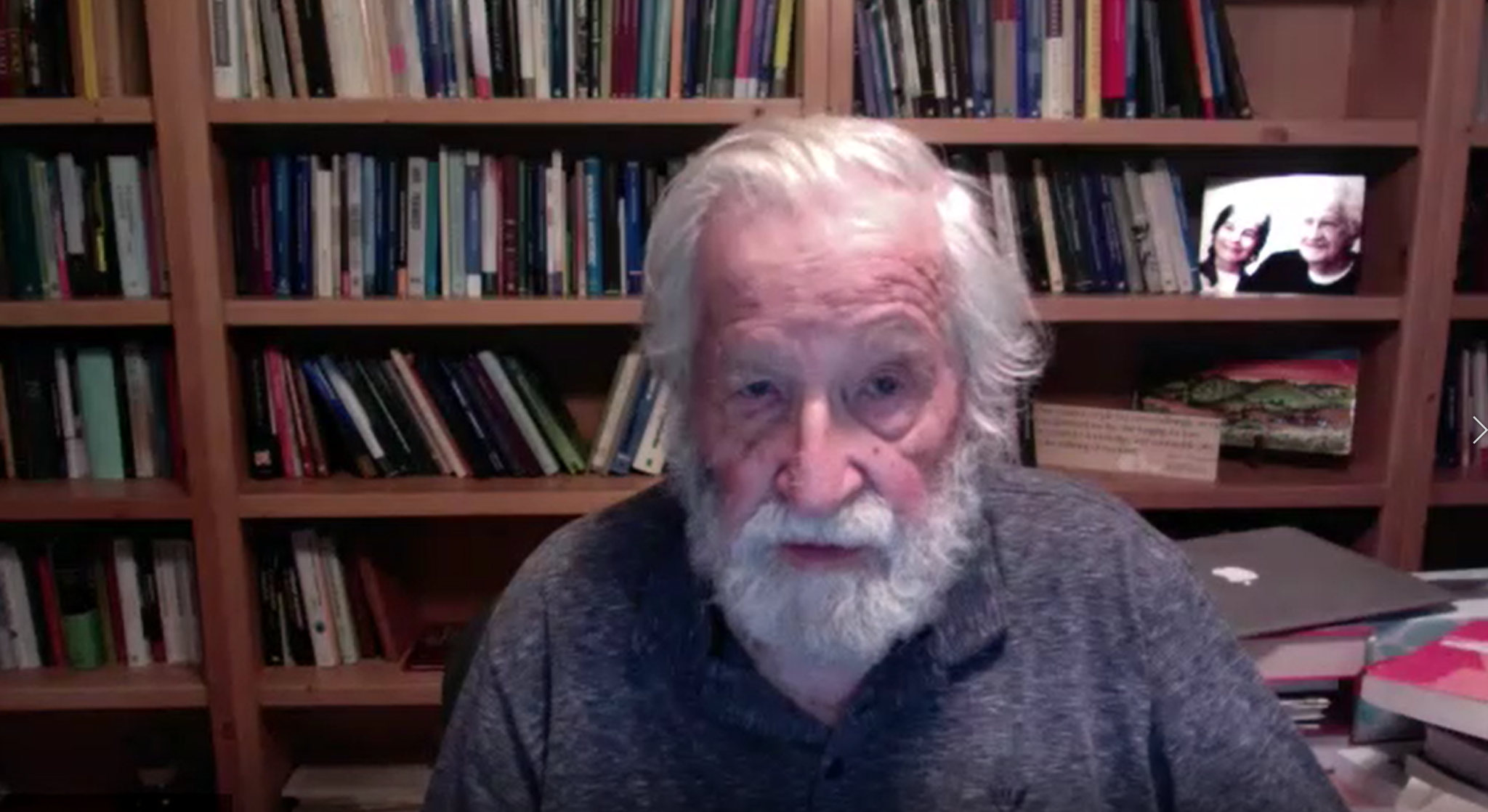 Screenshot from Zoom call with Noam Chomsky on April 23, 2020
Previous story
Next story

"A level of sadism that's hard to describe" -- that's how legendary linguist and intellectual Noam Chomsky describes the U.S. Trump administration's response to the global coronavirus pandemic, known as COVID-19.

Sitting down on for a Zoom conversation with Canada's National Observer editor-in-chief Linda Solomon-Wood and 700 audience participants, Chomsky gave a harsh rebuke of President Trump while outlining how the world can emerge from the virus a better, safe and more just society.

Noam Chomsky in conversation with Linda Solomon Wood in a live Zoom call on April 23, 2020

"The usual class war is operating right now," Chomsky said, of America's chaotic and uneven response to the COVID-19 crisis. Now with nearly 90,000 deaths and one fourth of the world's million cases, the pandemic has aggravated inequality in the U.S., with wealthy and well-connected people making millions off the virus even as inmates in prisons are forced to buy their own soap and paper towels to protect themselves against disease. Even in this time of crisis, Chomsky said, Republican leaders were inflicting economic pain on voters in Democratic states while bailing out large corporations.

"Senate Majority Leader Mitch McConnell, who's really the guiding hand, the thinker...he's the real evil genius in the administration. He said the stimulus program cannot give money to blue states...no money for places like New York that vote Democratic."

"The reason, [McConnell] said, is that future generations don't have to pay for mistakes made by states in the past like pension plans for teachers, firefighters, if they want to waste money that way, we're not going to pay for it," Chomsky said. "So let's look at who are we giving money to. Enterprises like the airline industries which spent the last year gorging on super profits and using it not to benefit consumers, not to build up the industry, but on stock buybacks to raise money for investors."

He said that the "usual class war" was in full swing during the pandemic, and that powerful forces were working to make the gap between the rich and poor even more pronounced than ever.

As for how the economic and political landscape in America might change, Chomsky drew parallels between the 1930s and today, and compared how both the Great Depression and the COVID-19 pandemic presented a stark choice to societies in terms of overcoming the crisis.

"The Great Depression had an enormous impact, much worse than this in fact...and there were two ways out," he said. "One way out was fascism. It spread over a lot of the world...Another way was basically New Deal style, welfare state style democracy and liberalism. That was the way the United States took (in the 1930s).... Those are the two ways out. We’re in the same situation now."

Chomsky said we will eventually emerge from the pandemic "at severe cost." But like jumping out of the frying pain into the fire, humanity would have to confront the other, inescapable problem of climate change.

"We are not going to escape from the melting of the polar ice caps, the rise in sea levels and the other extremely harmful consequences of global warming," he said. "The major country in the world, the United States, happens to be in the hands of someone, in fact a party, that wants to exacerbate the crisis. They want to make sure that (the coming crisis is) as severe as possible and as imminent as possible and are putting all their efforts into that right as we speak. If we want that to happen, we can watch and not react. Canada is hardly blameless in this."

In that regard, Chomsky said, U.S. President Donald Trump is building a framework for disasters that may result in a death count higher than even that ocaused by humanity's worst criminal.

"Hitler was maybe the worst criminal in human history. He murdered my extended family, Slavs, Roma, homosexuals...it's pretty evil," Chomsky said. "But what does Trump want to do? He wants to destroy the prospects for all organized human life. And in the near future. That's what it means to maximize the use of fossil fuels, to cut regulations that might diminish or restrict that danger."

He said the people who want to continue down this path appear to operate on the logic that the world is going off a cliff anyway, and that it was better to profit from it rather than seriously examine ways to mitigate the crisis.

How citizens can push back

But for all his bleak predictions, Chomsky said doomsday isn't inevitable, and that people are still capable of turning the tide through popular, organized movements.

"We've done harder things in the past," he said. "Activist movements, the Civil Rights movement, the Abolitionist movement, the women’s movement and the anti-war movement changed countries enormously. We’re not the same as we were, even 50 years ago. We are much more civilized societies. We can do this, too. Take the fossil fuel industry. Take a look at oil prices...The United States, Canada and others could simply socialize the industries, buy them up, not that expensive, and put them out of business. That would be a great boon to the world. You can’t do it in a day, but you can put the resources you have into developing sustainable energy. How much would that take? There are careful estimates by very good economists about how much it would take, how much it would cost to carry out policies which would basically control the enormous environmental crisis."

He said such a massive change would only take a small percentage of the mobilization required during World War II, so that it was completely doable.

Throughout the hour-long conversation, he fielded questions from National Observer's audience. One of the questions was from a 14-year-old asking what his generation could do. Chomsky said that young people were in fact the leaders and main drivers of changes in the world today.

He spoke of the dramatic moment at the World Economic Forum meeting in Davos, Switzerland, where U.S. President Donald Trump's speech was followed by that of 16-year-old Swedish climate activist Greta Thunberg.

Chomsky praised her for giving an "accurate, careful" speech describing the imminent climate crisis. "She ended quietly saying, you the people out there are destroying our hope for any life."

He said young people like Thunberg, and the 14-year-old listener, who have the power to change countries' response toward the climate crisis.

"It’s the Greta Thunbergs and the 14-year-olds whose world is being destroyed, and they’re on the front line of trying to save it and the older generation is betraying them," Chomsky said.

"They should continue to work energetically to make this clear."