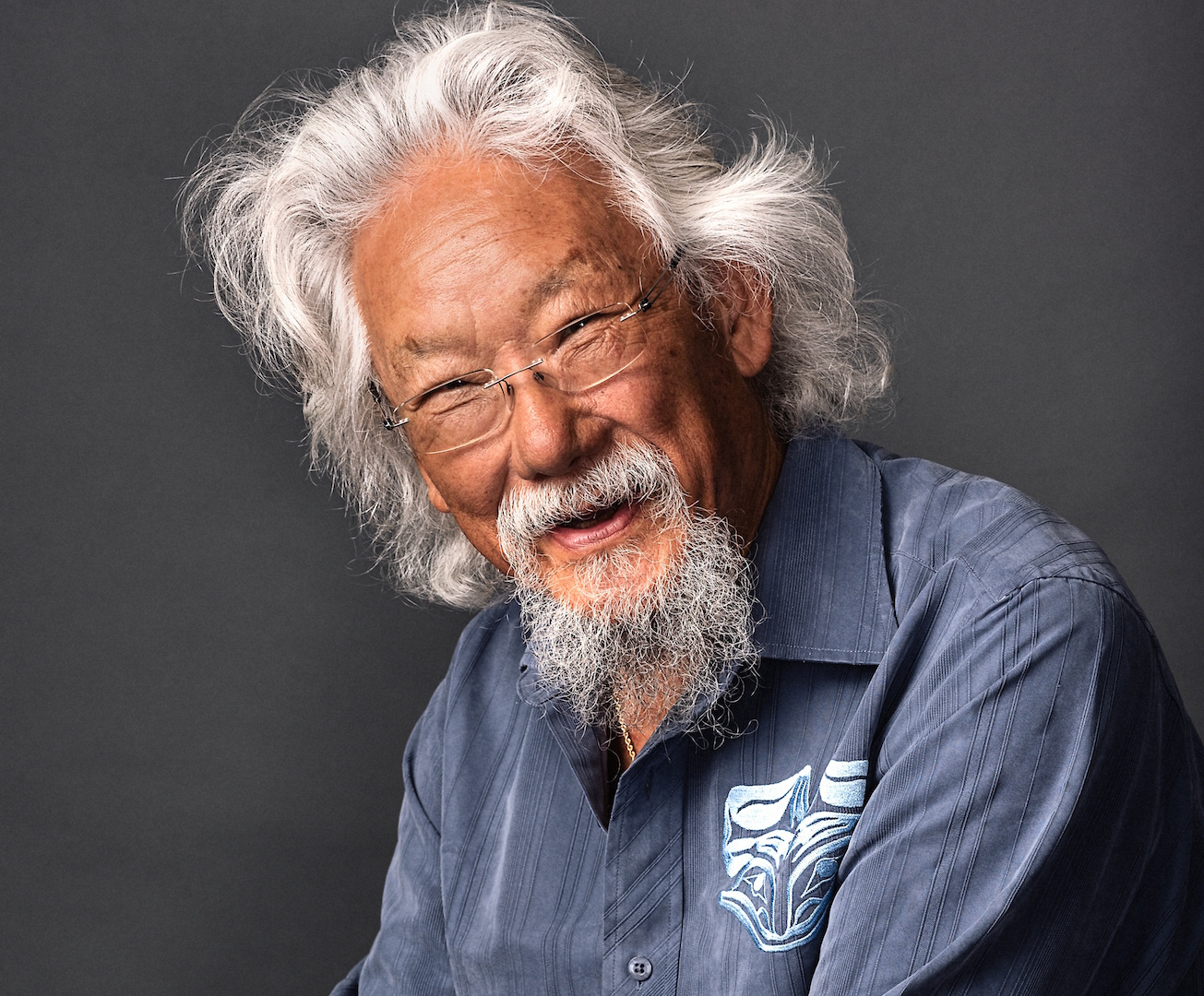 David Suzuki put more than 350 people on hold Thursday evening after spotting salmon leaping in the ocean through the window of the Quadra Island home where he’s currently riding out the coronavirus pandemic.

Canada's best-known environmental activist, scientist and broadcaster was participating in a Zoom call hosted by National Observer to discuss the intersection of COVID-19 and climate change.

But unable to contain his excitement, the 84-year-old naturalist wandered off-screen to alert his family to the beauty unfolding before him.

The moment only underscored the point he’d been making during his conversation with National Observer CEO and editor-in-chief Linda Solomon Wood, that despite the havoc COVID-19 is wreaking on people and their families, public health and economies worldwide, the virus was providing a breather for the environment.

“I was looking up at the sky today, and it was filled with geese … we’ve had pods of killer whales coming through, and I have the sense that Mother Earth is saying, ‘Phew, thank God, these busy people are giving me a break,’” Suzuki said. “And I hope that people who live in places like Shanghai and Beijing, in Delhi or Bombay, are looking up and seeing what it can be like when air is the way it should be, invisible and odourless.”

The pause of human activity has allowed nature some rebound, he said.

Suzuki acknowledged the burden millions of people are facing, but noted once the pandemic subsides, there is an opening to respond differently to climate change.

“This is a very, very tough time, but it’s a time when we can discover community,” he said. “It’s a huge opportunity, now, to say, ‘What the hell have we done wrong that got us into this mess, and how do we go about getting out of it?’”

And that doesn't mean trying to re-establish yesterday’s economy, but redesigning it for the future, in a way that values the common fundamentals of life such as air, water and food. The constraints and laws of the natural world are not flexible, but the economy is a human construct that can be adapted, Suzuki said.

“Let’s change the damn thing so it makes some sense,” he said.

There was much adulation and hopefulness about Trudeau’s environmental commitment after his election and following Canada’s signing onto the Paris Agreement on climate change, he noted.

“But then he bought a pipeline,” Suzuki said.

The federal government’s $4.5-billion buyout of Kinder Morgan’s struggling Trans Mountain pipeline demonstrates politics trump the environment, even if the results have lasting reverberations for future generations, he observed.

“Even the future for his own children … that has to come second to the political reality that his highest priority is getting re-elected,” Suzuki said.

People must stop looking to political leaders to lead change when it comes to the climate crisis, he said.

Suzuki cited various examples of the Canadian government’s dismal performance in protecting the environment over the three decades since scientists first sounded the climate-change alarm at the Toronto Conference on the Changing Atmosphere in 1988.

“The political system cannot deal with (the climate crisis) unless civil society rises up and demands they do it,” Suzuki said. “Then, they will jump on board.”

Massive efforts on the part of the public are critical, Suzuki said, pointing to the half-million demonstrators who accompanied Greta Thunberg in the global march for climate action this past September.

“Dammit all if that isn’t a demonstration that politicians will pay attention to,” he said.

Suzuki figured if just 3.5 per cent of the global population truly committed to pushing for climate action, it would make a huge difference worldwide.

When asked why government is listening to scientists about coronavirus, but not about climate change, Suzuki cited government’s short-sightedness.

“When bodies are being carted out to the crematorium or the graveyard, you respond in a different way to something that is 10 years, 15 years down the line.”

But we have to engage as if we are at war with climate crisis, he said.

“This is the existential crisis of our time. And once you commit to saying that this is the target … then get on with it.”

There are lessons from government’s rapid response to COVID-19 that could be applied to climate action, Suzuki said.

Government’s measures and responses to contain the coronavirus and its effects were unimaginable before the pandemic, he said.

“I think the important thing is you make the commitment to solve it,” he said. “Then, you pull out all the stops — the old rules and constraints no longer apply.”

[Editor's Note: On Friday, the day after the interview with Suzuki, Canada announced it would put a combined $2.5 billion toward cleaning up thousands of contaminated oil and gas wells in British Columbia, Alberta and Saskatchewan and to cutting a potent form of carbon pollution. Prime Minister Justin Trudeau said he wanted to support the industry's workers and their families, help oil and gas companies avoid bankruptcy, while supporting his government’s environmental goals. The David Suzuki Foundation issued a statement lauding the Trudeau government's action.]

I enjoyed listening to David

I enjoyed listening to David Suzuki and I totally agree with him about his comment that climate change is the biggest threat for the life of the planet. However there is no easy path to this and he offered no concept or suggestions for solutions on how to transition to a 'climate-friendly' economy. I do see that a large subsidy to workers to clean up the orphan wells is a good start, but the main source of pollution is through the transportation sector. So unless we have a huge number of means of transport that do not use fossil fuels, how do we reduce these emissions ? Yes we can legislate to raise fuel prices very high... but we also need the low-carbon means of transport both for people and for goods.. So perhaps offer huge subsidies to manufacture electric vehicles? and make these affordable? and perhaps make public transit free ? .... Unfortunately there is no silver bullet to switch without disrupting people's lives.... Its great to have visionaries to show us the goals but we also need practical solutions!

If there's one thing we can

If there's one thing we can all learn from David Suzuki, it's that his methods are totally ineffective. If change is to be made it will require massive civil action.

By the way, Canada, how do you feel about having your rights as guaranteed under the Charter of Rights and Freedoms flushed down the toilet?

Grow a backbone, quit hiding inside, and demand better!!!

Nice to see Mr. Suzuki's column in our local newspaper on Saturdays.. I understand that it is printed free of charge from the David Suzuki Foundation.