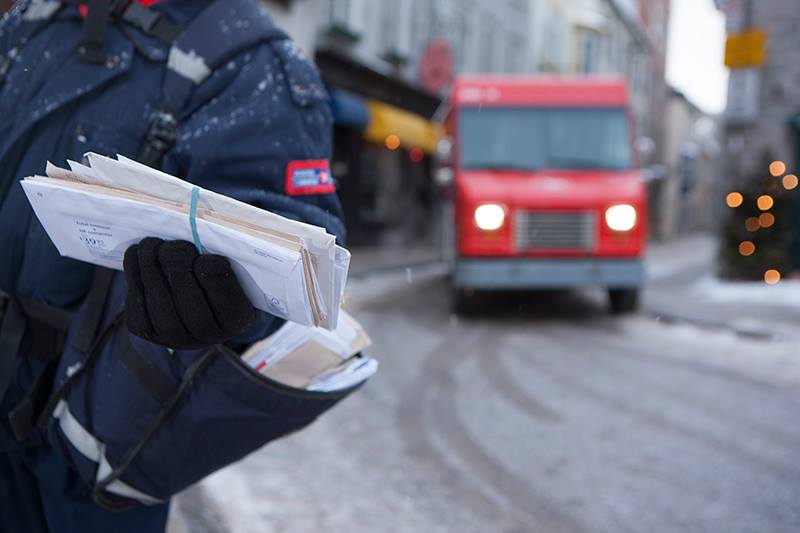 Canada Post has agreed to study how it could offer postal banking, including through setting up pilot projects at certain locations, as part of a new collaboration with a union representing rural postal workers.

The postal service and the union, the Canadian Postmasters and Assistants Association (CPAA), both confirmed the agreement, which is laid out in a letter of understanding between the two entities that was obtained by National Observer.

Canada Post will allocate up to $500,000 to a committee that will look at how rural post offices in places like the B.C. islands could offer services such as money transfers or cashing government cheques. As part of the study, it will set up "proof-of-concept" projects in "select locations."

The committee’s work has been postponed due to the COVID-19 pandemic, said a spokesperson for Canada Post.

The idea of postal banking, which existed in Canada until the late 1960s, is gaining traction again as banks move to close hundreds of branches and limit operating hours to slow the spread of the coronavirus.

The issue is of particular concern in British Columbia, where 61 per cent of rural communities had no bank or credit union as of 2014, according to a CPAA study. The village of Fraser Lake, for example, recently got a credit union after spending six months where the nearest in-person banking centre was a 40-minute drive away.

“Particularly right now, with COVID-19, we’re hearing of banks that are closing,” said British Columbia and Yukon branch president Carolyn Elliott, in an interview. “There is concern that they won’t re-open when the pandemic restrictions ease. That’s a big issue right now for a lot of communities.”

The CPAA says postal banking could be key to adding social and economic viability to hundreds of rural communities that don’t have banks, but do have post offices.

Canada Post has agreed to study how it could offer postal banking, including through setting up test sites at certain locations, as part of a new collaboration with a union representing rural postal workers.

But the Canadian Bankers Association, which represents dozens of banks, says there isn’t any public policy reason that would compel the federal government to get into the banking business. There are currently over 800 bank branches across B.C., it noted.

But its agreement with CPAA, which is dated Jan. 21, 2020, represents the first time it committed during the collective bargaining process with the union to examine the idea in greater detail, said Elliott.

“I think getting this letter of understanding into the collective agreement is a huge step forward in the (postal) corporation acknowledging the possibility,” she said.

The letter acknowledges that “Canada Post operates the largest retail network in Canada,” and that it needs to be financially self-sustaining, so it was important to study initiatives that could generate new revenue.

“Therefore, the parties agree to work together to study potential financial services offerings, as well as test proof of concepts, including, but not limited to, financial remittances and government cheque cashing,” reads the letter.

It says that by the end of April, Canada Post and the union would form a committee made up of two representatives from each side.

The committee would then have 18 months to review potential financial services that could be offered through CPAA’s rural post offices, and make written recommendations, with a preliminary report by January 2021.

“Unfortunately, in these unprecedented times, the start of the committee’s work has been delayed. Once details are available we will work with the CPAA to make them public.”

Canada Post “will allocate up to five hundred thousand dollars to the committee in order to allow it to carry out its mandate,” the letter adds. The money is expected to cover all costs associated with its work, including any contracted services.

'Lots of what is needed is already there'

“Our CPAA members have a proven record of providing reliable, responsible, professional, consistent service within their communities — and a lot of cases, they are the only federal presence in a community.”

The position of the banks has not changed. A spokesperson for the Canadian Bankers Association told National Observer on Monday that the organization has “nothing further to add on this issue” since its comments made on June 13, 2016 to the Canada Post Review Task Force.

At that time, it said there was “no public policy objective or existing gap in the marketplace that would necessitate the Government of Canada entering into the business of retail banking through Canada Post.”

“Some proponents of postal banking have asserted that banking services are inaccessible in Canada. Contrary to these claims, banking is more accessible than ever,” it wrote. “In fact, the number of branches in Canada has increased from 6,151 in 2010 to 6,348 in 2014.”

Meanwhile, while the committee did acknowledge that rural Canadians want better access to banking services, it said many rural locations are "actually operated out of homes or small shacks" which it said was "not appropriate" for banking.

It also said rural broadband internet access should be a priority, to allow for more people to access online banking, instead of Canada Post venturing into an area “where it has limited expertise."

By Carl Meyer | News, Energy, Politics | March 11th 2020
Reports from the Race to a Safer World

Liberals: never do by halfs

Liberals: never do by halfs what you can do by quarters. Another 18 months? Viable in Canada till the 60s and in MANY countries. but we need 18 months to STUDY it?
does that bring us to the next election by chance? They could do it next month if they wanted to --as Covid has proven.
Big banks dont want to provide actual. service and dont want to lose their payday loan-sharking gig. in lieu of real bank service. Who has the business lock on the government's ear.

Absolutely!! It's the same

Absolutely!! It's the same old story - the profiteers lobby like crazy to keep their greed satisfied! For an expertly-done explanation of postal banking for Canada, please look up "Delivering Community Power", a campaign of the Canadian Union of Postal Employees. It details the benefits to everyone of postal banking, as well as electrification of the vehicle fleet, delivery of medications and other necessities, checking up on seniorsand others in remote areas, and many other services.

This was, and remains, a

This was, and remains, a great idea. The PO is not necessarily profit-motivated, so it could offer standard low cost banking services without fees, or at least fees that are simplified and change only with inflation. A reasonable, stable profit from a banking component will help defray the PO corporation costs to taxpayers. Moreover, the PO branches could become village and town hubs for broadband internet offices and probably technical support facilities (federal participation required), expanded stationery sales, shared building space with the RCMP, DND and possibly village council and/or private offices and so forth.

The CUPW (Canadian Union of

The CUPW (Canadian Union of Postal Workers) has been pushing for this for years! It would provide low cost banking solutions so understandably banks are worried. But why should Canadians continue to pay outrageous fees just so big banks can continue their monopoly?

It sounds like a great idea. Why the study? So liberal friends can make a pot of money. The Banks are far too powerful and their top executives make an insane amount of money per year, especially when compared to the interest rates they offer on GICs and saving accounts etc. Just look at their credit card interest rates. O yes they will allow people to defer payments. Luckily I don’t carry a balance forward.