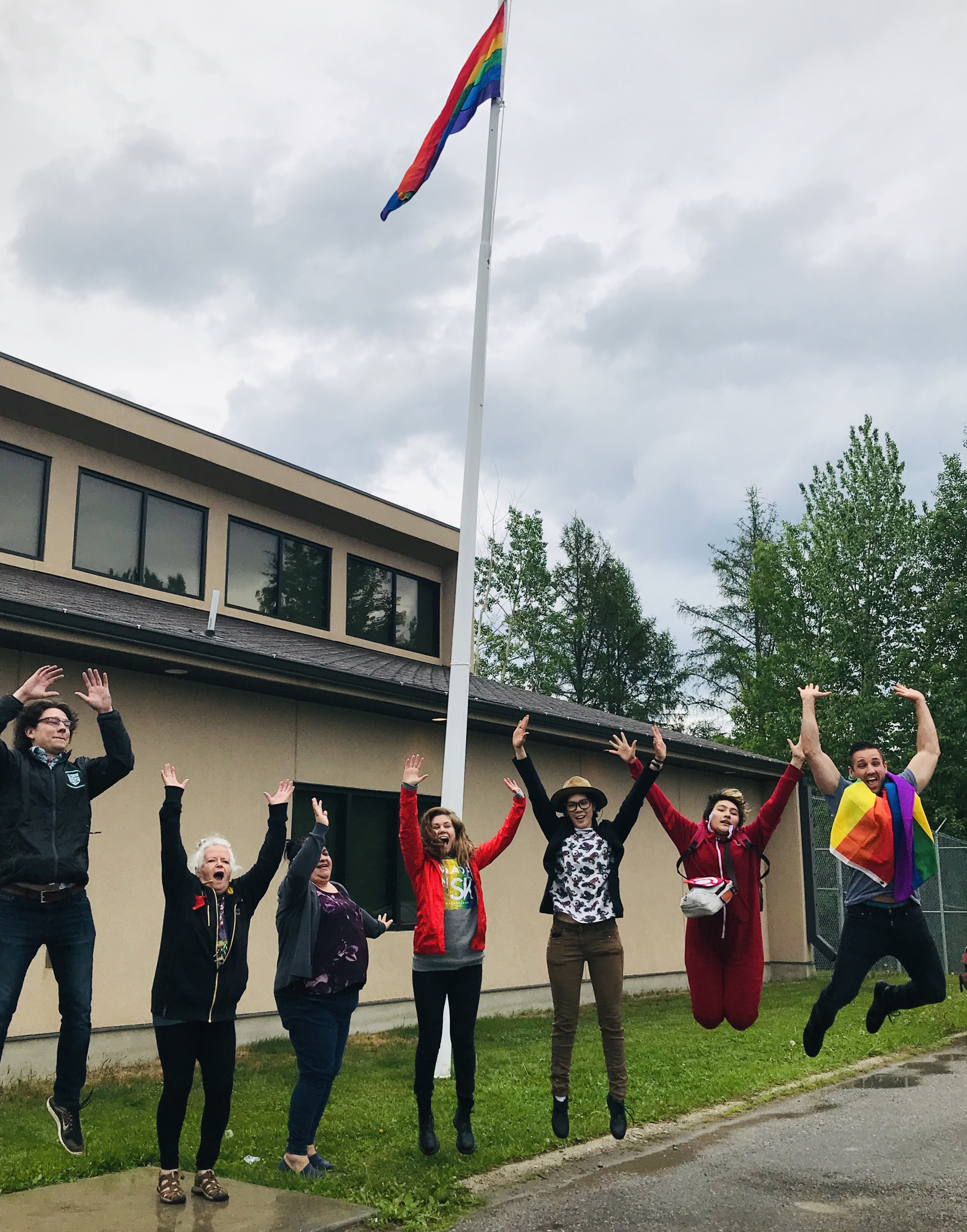 If he ran and won, it would make him the only openly gay councillor in La Ronge and the first as far as we know.

The council vote is significant because it marks the first time all members present have agreed to a motion regarding the pride flag. Ratushniak said the fact everyone on council voted in favour of the motion is in itself a win.

“I think that it’s necessary for people to see that we’re viable. So this was a fantastic win for our organization,” Ratushniak told Canada’s National Observer after the town council meeting approved his bid on Thursday.

Ratushniak is a pilot with Transwest and fitness supervisor at the Jonas Roberts Memorial Community Centre’s fitness centre where he manages the gym area.

He had a successful career as a figure skater, having toured with “Disney on Ice” for five years. Ratushniak is known for his 2011 appearance in the TV show "Dancing on Ice" alongside skating partner, U.K. television presenter Laura Hamilton.

"I think La Ronge needs to continue to be a beacon in showing equality and showing that LGBTQ2+ people are viable and visible within the community," Colin Ratushniak.

From there, he moved into television production. “I did cruise ships, I did a TV show in the U.K. that was sort of like ‘Dancing with the Stars.’ I have a colourful past,” he said.

Ratushniak toured in approximately 65 countries around the world for 13 years and moved into television, becoming a producer in the U.K.

“I produced ‘Big Brother’ over there for about three years and then I moved back to Toronto, where I was working at CTV ... on their specialty programming like ‘etalk,’ and the ‘Much Music Video Awards,’” he said.

That’s when he rediscovered his childhood love of flying and made an abrupt career change in his early 30s.

Ratushniak also got involved in pride and started taking a leadership role in the solidarity movement to get the pride flag accepted in La Ronge.

“I couldn’t believe that in this day and age, things like that were still being struck down. Especially considering how far we’ve come.”

Also in 2019, his group of about 10 volunteers involved the community and staged a walk-in at the La Ronge town council chamber, demanding acceptance for the pride flag.

“We packed the chamber with as many people as we possibly could. It was amazing to see the support from the community,” Ratushniak said.

Pushing for equality on the La Ronge town council hits close to home for Ratushniak.

“I grew up in northern Manitoba in a town of 2,000 people and I left because I didn’t feel like my community was there. I was lost or didn’t know where to turn for support for that, so coming back to a small town, I felt like it’s very important to keep pushing that.”

He said what makes it all worthwhile for him is when he sees the impact his advocacy work has on youth struggling with coming out in the community and to their parents.

“As long as I continue to have that effect on people’s lives, I will continue to push for that equality that we deserve and need,” he said.

He said homophobia continues to be an issue in society and this can be especially hard in small communities like La Ronge.

“We have parents here who have children who have dealt with suicide,” he said.

Ratushniak said Coun. Jordan McPhail and Mayor Ron Woytowich were the only two who showed up to yearly pride parades.

“We might see more involvement this year because there's an election coming up and people might want to save face … The only thing that we can do is try to educate people and that’s the win in this game,” he said.

In 2017, McPhail’s motion to raise the pride flag was defeated four votes to three. Prior to the vote, McPhail had famously raised the pride flag at town council regardless. There was gradual progress on the issue in following years as pride parades continued to happen.

In 2018, town of La Ronge chief administrative officer Stephen Conway resigned and sent a letter accusing some council members of homophobia and misogyny as well as racist behaviour, violent drunkenness, corruption and conflict of interest.

Conway alleged in his letter that “once the media leaves the room and provided there are no members of the public in attendance” members of council attacked people using highly offensive language toward sexual and racial minorities.

The pride flag motion was brought back to council in 2019 and passed six to one, with Coun. Dallas Everest voting against. This year’s motion, put forward by McPhail and seconded by Coun. Matt Klassen, saw full support for allowing the flag to fly for the month of July.

Woytowich told National Observer that while he cannot speak to whether or not any councillors are homophobic, the reasons given for objections to the pride flag were more procedural. He said that he has personally always supported both the pride parade and raising the flag, but in the past, councillors took issue with the way motions were put forward.

Woytowich said his understanding was, in the past, councillors were concerned about the flag setting a precedent for other flags to go up in La Ronge, and also because at the time, they only had three flag poles — one for Canada, one for Saskatchewan and one for the town. The 2017 records show that he supported the pride flag motion in 2017, when it was voted down.

“I think it was absolutely necessary from the beginning in 2017. Ultimately, at the time, it did fail, but I think we’ve come a long way and that’s part of pride celebrations — to raise awareness and to educate people. Colin has done an amazing job at educating the public and councillors,” McPhail said.

McPhail’s grandfather, Rex McPhail, who also sits on the La Ronge town council, previously voted for the flag, but was absent from Thursday's meeting.

“By raising that flag, it’s also saying that the community supports you and is not against you in any way,” Jordan McPhail said.

“I think it’s a win for the tri-communities. I think La Ronge needs to continue to be a beacon in showing equality and showing that LGBTQ2+ people are viable and visible within the community. We’re your sisters, we’re your brothers, we’re your uncles, we’re your aunts, we’re taxpaying citizens,” Ratushniak said.

Ratushniak said if he ultimately runs for council, he will continue to advocate for the community.

“We’re seeing the pride flag and the pride movement happening in the tri-communities and things are finally moving in the right direction. I want people to know that they’re not alone and that the communities are here to support them. It’s small steps and small wins that will show that,” he said.

Because of COVID-19, the coming pride parade was cancelled and is being reformatted.

Ratushniak is looking at options to conduct a socially distanced pride celebration, such as a parade where people stay inside their vehicles, and an online awareness campaign involving a choreography challenge.

He suggested following the Lac La Ronge regional pride committee Facebook and Instagram pages for updates on what will happen this year.

This year the flag will be raised at the community flagpole in Patterson Park instead of in front of the town office as it was last year.