For streaming: Mr. Jones recalls a genocide, Buffaloed follows the money, and DOXA documents everything 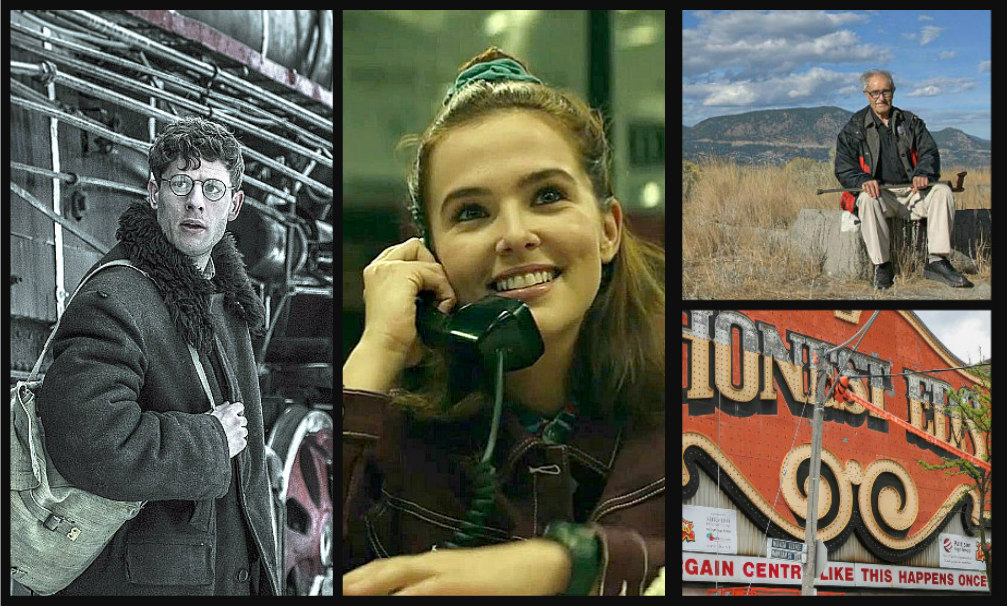 Also ... there's two films by and/or about women.
Previous story
Next story

Only a minuscule number of movie theatres have reopened and even the Academy Awards show has been pushed back. By two months, to late April. It looks like the streaming era is going to be with us for some time. Luckily, there are still a lot of new movies coming out, plus this week, all those documentaries from the DOXA festival.

MR. JONES: Here’s a salute to dogged journalism, plus a revelation about an historical horror that should be better known, and a thriller to boot. It’s compelling viewing directed by Agnieszka Holland, who, as usual doesn’t hold back in making us feel outrage. It’s multi-pronged here in the real-life story of Gareth Jones, a Welsh journalist who after one coup in the early 1930s, getting an interview with Hitler, went for another. He wanted to ask Stalin how Russia could afford the economic progress it was making and almost by accident found one answer in Ukraine. It was a man-made famine. People were forced into collective farming but went hungry as their grain was shipped to Russia. Ukrainians know it as Holodomor, and the film draws on research at the University of Alberta.

Jones (played by James Norton) saw it first-hand (in some grim and chilling sequences) and then had to fight to report it. The Moscow New York Times correspondent (played by Peter Sarsgaard) opposed him; though a fictional colleague (Vanessa Kirby) and later William Randolph Hearst of all people helped him. The film doesn’t have his whole story and unnecessarily flashes to George Orwell (Joseph Mawle) a few times to suggest it helped inspire the novel Animal Farm. But it does give the ethics of reporting a full airing. One character says, “It is not the job of a journalist to say, ‘How dare you, sir.”' The film argues the opposite. (Available now to buy —EST— or, in two weeks to rent — VOD.) 3½ out of 5

BUFFALOED: This one is just as much fun as The Wolf of Wall Street, and just as judgmental, though the players are downscale. They’re debt collectors. They buy what they call “paper” from banks that can’t bother to go after small debtors and phone them up demanding payment. It’s all explained right into the camera (“Get it? Good. Continue.”) by a young and fiercely ambitious woman (Zoey Deutch) who gets into the business after her other money-making schemes in Buffalo, N.Y., fail. She succeeds because she’s better than the surrounding bullies in the call centre. “You’re good for a chick,” says her boss (Jai Courtney).

But it’s war when she sets out of her own, starts a competing agency and steals a lot of his business. Her people are smooth-talkers who don’t threaten but sell “financial freedom.” There’s back and forth sabotage as the two agencies fight it out in this less-than-subtle comedy. As a bonus, it gives quite a bit of background content. Americans carry $13 trillion in debt, the film says (2018 figures), much of it for medical bills and student loans. There are few laws and collectors can garnishee wages at will. Sometimes they “re-do,” meaning they collect the same debt more than once. “Debt never dies,” they say. The film, directed by Tanya Wexler, is lively both as an attack on the lower rungs of the financial industry and a salute to women’s success. (Available to buy or rent, EST or VOD.) 3 out of 5

DOXA: The annual documentary film festival is also driven online this year by COVID-19, and look at the benefits. Tickets are only $8 ($6 for students and seniors; $60 for a pass to an unlimited number of films), and you’re not tied to a specific day or time. Most titles are available to stream any time through the week. Info and details at https://www.doxafestival.ca

Some events do have specific times. Saturday’s discussion by Mira Burt-Wintonick, for instance, on the film she made about her father. It opened the festival Thursday and I reviewed it last week. Special guest will be Nettie Wild, who got some mentoring advice from Peter Wintonick on her 1988 film A Rustling of Leaves: Inside the Philippine Revolution, which is also in the festival.

The choices are as usual well-curated. I’ve seen these so far.

INFLUENCE: If you’re wary of what’s happened to modern elections, watch this examination of a man who’s had more than a little effect on them. Lord Tim Bell is said to have “weaponized advertising” and used it to elect Margaret Thatcher (three times), fix the public image of Pinochet in Chile and help the U.S. in Iraq, and more ... until he did a disastrous interview on British TV, which led to his decline.

His innovations survive though: elections can be won without policy; just by understanding group behaviour. A new science, he called it. 4 out of 5

SOFTIE: Follows an actual election in Kenya, said to be one of the most corrupt countries on Earth. Activist Boniface Mwangi ran for Parliament to counter the tribal divisions that he says the government inherited from the British and now use to divide the people. The film plays like an action picture as police beat demonstrators, and as an engrossing drama.

Death threats force Mwangi to send his family to the U.S. for safety, and when they return, he has to face a bigger question: politics or family? Kenyan filmmaker Sam Soko expected to make only a short guide for activists, but as the story got more and more compelling, he stayed with it for this full feature. 3½ out of 5

FINDING SALLY: Check out this one, too, I gave it a 4 out of 5 rating in April when it played on TV. It’s a very strong documentary about family history, linking Canada and Ethiopia and offering surprises and a very emotional payoff.

EDDY’S KINGDOM: An almost forgotten bit of B.C. history drives this engrossing film. Eddy Heymour seemed to be a classic successful immigrant. He arrived with little, worked as a barber, and 20 years later, had enough to buy an island in Okanagan Lake with plans to build a theme park. People across the lake objected, W.A.C. Bennett, the premier and local MLA, opposed it, and before the story peaks, Eddie is charged as a terrorist, thrown into a mental hospital, compelled to sell his land, and arrested after taking hostages at the Canadian Embassy in Beirut. To this day, he’s trying to get his island back.

Sometime along the way, he also built a huge house he called his castle. In the film, he explains himself, while his daughters, his lawyer and others give varying views of his achievements. Or are they obsessions? 3½ out of 5

THERE’S NO PLACE LIKE THIS PLACE, ANYPLACE: I used to live in Toronto and was well aware of Honest Ed’s flashy discount department store, and bought a few things there myself. Now in Vancouver, I’m intrigued by the debate over gentrification it has sparked. It’s exactly like so many right here and, in fact, the company developing the site is Vancouver’s Westbank Properties.

Director Lulu Wei shows the building coming down, with nearby residents waiting to be displaced and fighting for a say in what goes up. Westbank trumpets its “community engagement process.” It’s not clear who won what, but it’s interesting to see the campaigns playing out. 3 out of 5

THE REST OF US: This is a women’s movie in the best sense of that term. It’s authentic about how they relate to each other, even if the basic situation here seems farfetched. It also has mother-and-daughter conversations that match perfectly how they are in real life. One in particular slides easily from a fun encounter to rancor, attesting to real talent by two new hands at this, screenwriter Alanna Francis and director Aisling Chin-Yee. The latter is a veteran producer in Montreal.

Heather Graham plays a divorced mother with a headstrong daughter (Sophie Nélisse). They can’t help but mourn when they hear their father has died, even though they both insist they hated him. Heather learns that he left his finances in a mess (accounts frozen, no insurance, house repossessed), takes pity on his widow (Jodi Balfour) and young daughter and allows them to stay in a camper trailer behind her house. Her daughter hates the arrangement, hence the arguments with mom that include terse interchanges like: “I’m your dad’s wife. Not his mistress.” “Not anymore.” The daughter warms to the other woman, though, and the film watches the characters struggling to get along, help out the widow and survive some surprise revelations. It’s sympathetic, well-written and well-played. (Video on demand.) 3½ out of 5

YOU DON’T NOMI: In 1996, the film Showgirls won seven Razzies, the awards for bad movies. It was a record at the time and was later followed by yet another for worst picture of the 1990s. Today there are people who call it a masterpiece. How can that be? This film brings a whole range of opinion together. Toronto critic Adam Nayman says it is “very accomplished, very clever” and “completely singular; like nothing else,” while opposing comments include “drearily pedestrian,” “kinda raunchy” and “a B-grade remake.” I remember it as lurid and juvenile, though I do agree it has hysterical energy.

You’ll see lots of excerpts in this re-evaluation, although the producers only provided photos of some stage-bound re-enactments. That’s where the film started its resurgence, as a piece of camp for gay audiences. Then it became appreciated as a genre picture of a woman clawing her way to the top. Nomi is her name. Looking to be a Las Vegas showgirl, she’s pressed into performing as a stripper, manipulated and abused by men. Like an adolescent, Dutch director Paul Verhoeven relished showing a great deal of her stripping, which some think expounds deep themes. Looks like a skin show to me, but the ties to All About Eve and to Maria Montez in Cobra Woman help make this a fascinating essay. (Video on demand.) 2½ out of 5