Streaming or in cinema: A civil rights icon, a battle lost, and a photographer’s provocations 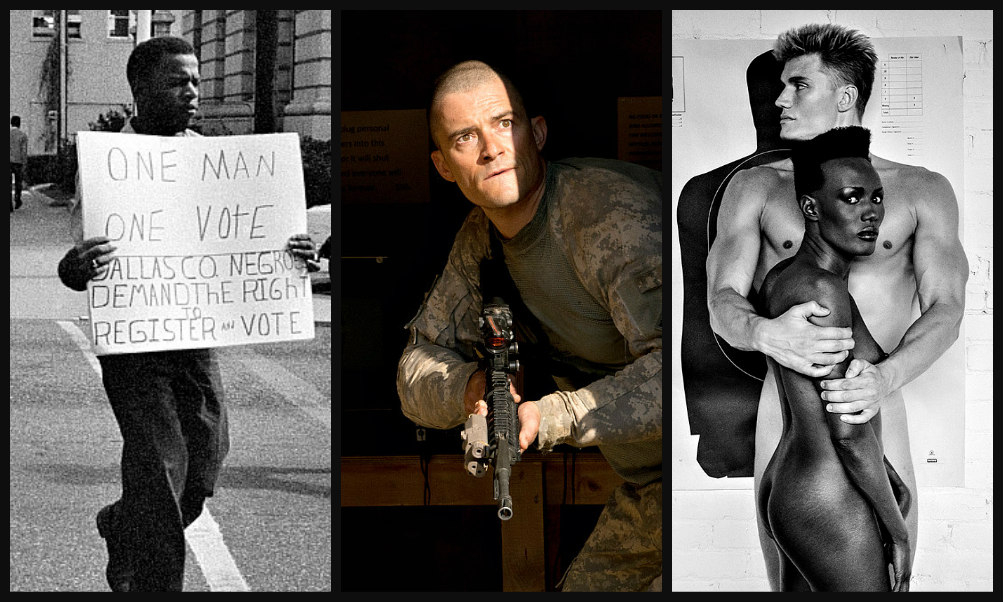 The Academy Awards have made another concession to the new movie reality. It has just ruled films that have had to resort to play on a streaming service can still compete for Oscars as long as they were originally planned to be shown in theatres. Seems minor, but the list of contenders would have been small, maybe tiny, if things keep going as they are.

One of the films I review this week is getting some in-theatre play.

Helmut Newton: The Bad and the Beautiful: 3½

JOHN LEWIS: GOOD TROUBLE: There’s sure to be extra interest now in this biography about the long-time civil rights campaigner and U.S. congressman. He died a week ago (July 17) and as this film ably shows his story and his advocacy of “good trouble” to push for progress is inspiring. He was right there in the front of the march across that bridge in Selma, Ala., in 1965.

He was an original Freedom Rider, worked to desegregate lunch counters and register voters, helped found the Student Non-Violent Action Committee and helped organize the March on Washington. He was the second-last speaker there, just before Martin Luther King, who he had written to and connected with when he was only 17. Dramatic news footage, archival clips and recollections by family members and old colleagues tell those stories. What they mean and how they fired up his 33 years as “the conscience of Congress” comes from a stellar cast including Nancy Pelosi, Eric Holder, Cory Booker, Hillary Clinton, Alexandria Ocasio-Cortez, and more.

He tells much of it himself. About hating farm work, for instance (his parents were sharecroppers), about wanting to become a pastor and practising by preaching to the chickens. And his fears that hard-won rights are under threat. “There are forces today trying to take us back to another time, and another dark period,” he says at the beginning, referring to voter suppression. Fighting it was a big cause for him. He didn’t like Trump, either, but that name is hardly mentioned. What we do get in this film by Dawn Porter is a closer look at Lewis the man. He had a great sense of humour and was welcoming when ordinary people talked to him like a friend at a mall or like a celebrity in an airport. And he loved to dance, as he shows when a Pharrell Williams tune comes on. Politics and personal mix well here. The film is in a few virtual theatres (try https://hotdocs.ca/p/hd-home, scroll to the bottom and click on “what’s streaming”), will be available “on demand” in September and on Netflix in January. 4 out of 5

THE OUTPOST: This Afghanistan war film has already been a big streaming hit in the U.S., and no wonder. Its virile ambience fits well with action-starved movie fans. But caution: Don’t enter if you can’t take the kind of language young soldiers under pressure speak. It’s constant here as these guys aren’t sure what they’re supposed to be doing. Winning “hearts and minds” of the locals, says one. Yeah, but all they want is “our blood and guts,” another answers. So they live with a repeating ritual. Their camp is in a valley and Taliban fighters shoot at them now and then from the slopes above. The shooting stops and starts again another day. There are tense meetings with Afghan elders, but no resolution.

The film, based on a factual book by CNN host Jake Tapper, shows several gun battles like that. The G.I.s fire back with machine guns (if the ammo guy has brought fresh supplies), run through the flying bullets to rescue injured pals, and, if available, hit back with mortar fire. Later, the Taliban get their own mortars to fire and later they swarm down from the mountains in the hundreds. Those scenes are vibrant under the direction of Rod Lurie, who has a military background himself. It was the bloodiest battle the U.S. fought in Afghanistan. Several medals were handed out after it and rules were changed about “indefensible” positions. Orlando Bloom, almost unrecognizable, plays an officer, and among the lower ranks you’ll see Clint Eastwood’s son Scott, Mel Gibson’s son Milo, Mick Jagger’s son James, Richard Attenborough’s grandson Will, and Scott Alda Coffey, grandson of Alan. (Available in Canada since Tuesday, both to buy — EST — and on demand — VOD) 3½ out of 5

HELMUT NEWTON: THE BAD AND THE BEAUTIFUL: This film portrait of the legendary photographer considers the biggest question of his career at length and from many angles. What exactly was his attitude towards women? You get many fashion shots, most of them from various editions of Vogue, and many, many nudes to help you decide. Susan Sontag tells him directly that she detects misogyny. Isabella Rossellini says there’s both love and hate, fear perhaps, and that’s true about many men in general. Grace Jones says many of the photos may be erotic, but they’re never vulgar. Charlotte Rampling says they’re provocative, and Anna Wintour loved them for just that. Marianne Faithfull, Claudia Schiffer and Hanna Schygulla talk positively about posing for him.

Newton himself says in a lively series of interviews done at various times before his death in a car crash 16 years ago that the two worst words in photography are “art” and “good taste.” And this: “I don’t care if people don’t like it. The important thing is if I like it.” The film by German artist Gero von Boehm captures that same spirit of defiance. It traces Newton’s taste to Weimar, Germany, where he was born, to a bit of Nazi imagery that was all around him as a child and to a cheeky attitude picked up in Australia, where he ended up for a time after his family escaped Germany. Along with biography we get to see him at work. Like a film director, he insists on tiny changes from his models to tell a story exactly as he wants.

His wife June recalls “obsession.” It looks more like creativity, with a good bit of humour added in. (Streaming at https://viff.org and playing in-cinema at The Rio here and The Vic in Victoria) 3½ out of 5

ASH: Beautifully-made in B.C. though it is, I’m confused by the intent. You have to consider the plot to get what I’m talking about. A small town (Peachland) reporter (Tim Guinee) covers the Okanagan forest fire of 2016 with a drive you often find in people like that. He’s got dreams and ambitions to be recognized but limited talent as he proves in a fumbling telephone interview he does with a national TV show. Andrew Huculiak, who’s originally from there, has drawn him and his environment perfectly, both in his screenplay and his direction. Chelah Horsdal is also authentic playing his wife. And the actual fire scenes are spectacular. They were filmed at some peril while they happened.

Then the story takes a sharp turn. Police arrive to search his house, his computer and his phone. To us, it’s out of the blue; to Huculiak, it’s like an incident he remembers from years ago with a friend’s father. Here, the reporter, soon after he is given a commendation for his work by the mayor, is charged with three counts of child pornography. People turn on him, but is he guilty? Wrongly accused? He runs into the woods, collapses into a pile of ashes and considers suicide. He explains himself to a therapist, who identifies “intrusive thoughts” and obsessive compulsive disorder. Is the film trying to clear him or understand him? The handling of the issue is sensitive and the acting, especially by Guinee, is very fine, but questions remain. Debates may follow. (Available now at viff.org and at Vimeo and starting Tuesday at iTunes) 3 out of 5

A PERFECT PLAN: This tight little thriller starts promisingly and gets increasingly unconvincing as it moves along. It’s largely set in a basement where four people find themselves trapped. Outside in a park, two men talk and let us know they have something to do with it and that the four inside will figure it out because “these people are what they are.” For us, the film starts like a puzzle. The four work on it and soon recognize, “We’re all here for a reason.”

Slowly we’re let in on the mystery. They’re all proficient at something. One (William Forsythe) did a famous art burglary at a museum. Another (Michael Hough) is a bank robber. There’s a safecracker (Kathleen Munroe) and an explosives expert (Gia Sandhu). They soon reckon they’ve been brought here to carry out another burglary; something about diamonds reputed to be in a safe one floor above them. And behind super-hard glass, they soon find out. An OK premise for a thriller, except we don’t ever find out how the two men outside (Carlo Rota and Yannick Bisson, of Murdoch Mysteries) got them there in the first place. They’re clever enough to watch the quartet on security monitors from inside an RV and don’t need to explain everything. Maybe. The movie moves along nicely, but doesn’t really grab. Toronto plays Cleveland. (Available video on demand and digital) 2½ out of 5