Military in Arctic aims to send message without spreading COVID-19 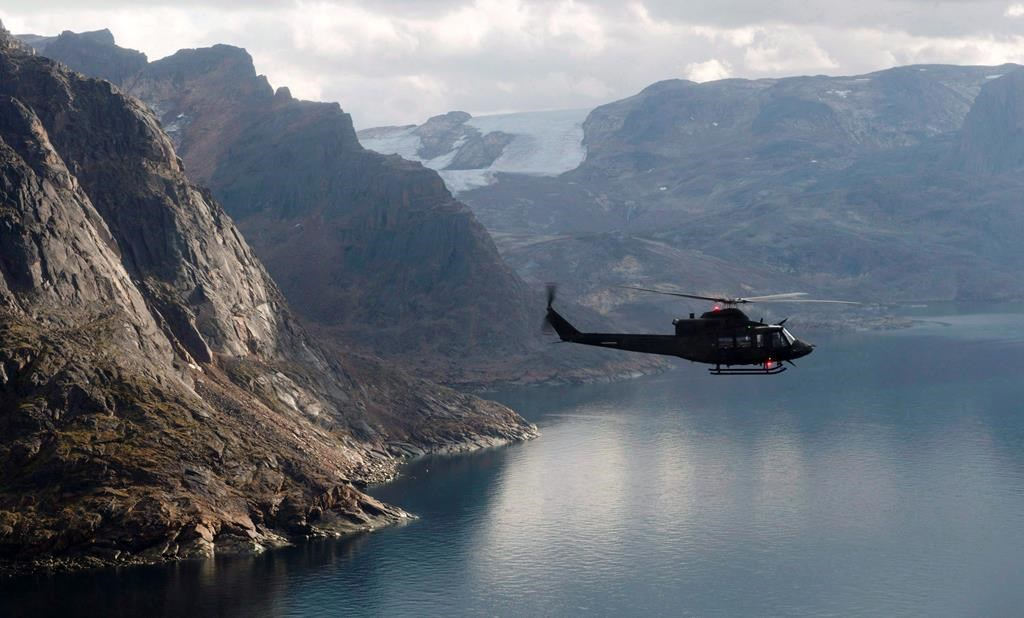 A Canadian military Griffon helicopter flies along the shoreline of Baffin Island as it moves personnel between Operation Nanook and Iqaluit, on Tuesday, August 26, 2014. File photo by The Canadian Press/Adrian Wyld
Previous story
Next story

Canada and some of its closest allies have kicked off a three-week naval exercise in the Arctic that aims to send a message of unity against potential adversaries in the North without spreading COVID-19 to local communities.

The training exercise known as Operation Nanook has been a mainstay for the Canadian Armed Forces since 2007 but this is the first year that the U.S., France and Denmark will all be participating as well.

Canadian and U.S. naval officers told reporters during a briefing Tuesday that the involvement of those other nations reflected the importance of co-operation among allies when it comes to military operations in an increasingly important part of the world.

Western countries as well as potential adversaries such as Russia and China have been steadily expanding their military footprints and activities in the region as climate change makes it easier to reach and operate in, raising concerns about the threat of a conflict.

"The message is the Arctic is strategically important, it's becoming increasingly important and it's important for our collective national security," said Vice-Admiral Steven Poulin, commander of the U.S. Coast Guard's Atlantic area.

"And I think the participation is a reflection of a mutual commitment by the partners and allied nations to share goals to that end."

Yet this year's iteration of Operation Nanook is also smaller than past versions, which have included personnel and equipment from across the Canadian military, particularly the Canadian Rangers, as well as other federal departments.

Rear Admiral Brian Santarpia, commander of the Royal Canadian Navy's Maritime Forces Atlantic, said this year's exercise will not include any land-based forces and focus almost exclusively on naval operations because of concerns about spreading COVID-19.

"Much of Nanook we decided not to conduct this year because we didn't want to be a vector into our own remote populations, where they're quite protected from COVID now just by that very fact of being remote," Santarpia said.

The three Canadian navy ships and four foreign vessels participating will not make any stops in Canada's Far North. Their only port call will be to Nuuk, Greenland, to refuel. Sailors will not be allowed off their ships.

Canada and some of its closest allies have kicked off a three-week naval exercise in the Arctic that aims to send a message of unity against potential adversaries in the North without spreading COVID-19 to local communities.

Canada's three territories have been largely spared from any COVID-19 outbreak, with only a handful of positive cases reported.

The Canadian and allied warships will focus most of their activities in the Davis Strait between Baffin Island and Greenland, which is considered part of the Northwest Passage.

Canada and the U.S. have been at odds for decades over whether the passage is Canadian or international waters, a question Santarpia, Poulin and Vice-Admiral Andrew Lewis, commander of the U.S. 2nd Fleet, studiously avoided.

"It's a complex issue that involves more lawyers than naval officers and it has a lot to do with interpretations of international law," Santarpia said.

"This exercise is really designed to let us work better together than we already do and we'll let the lawyers worry about the rest of it."