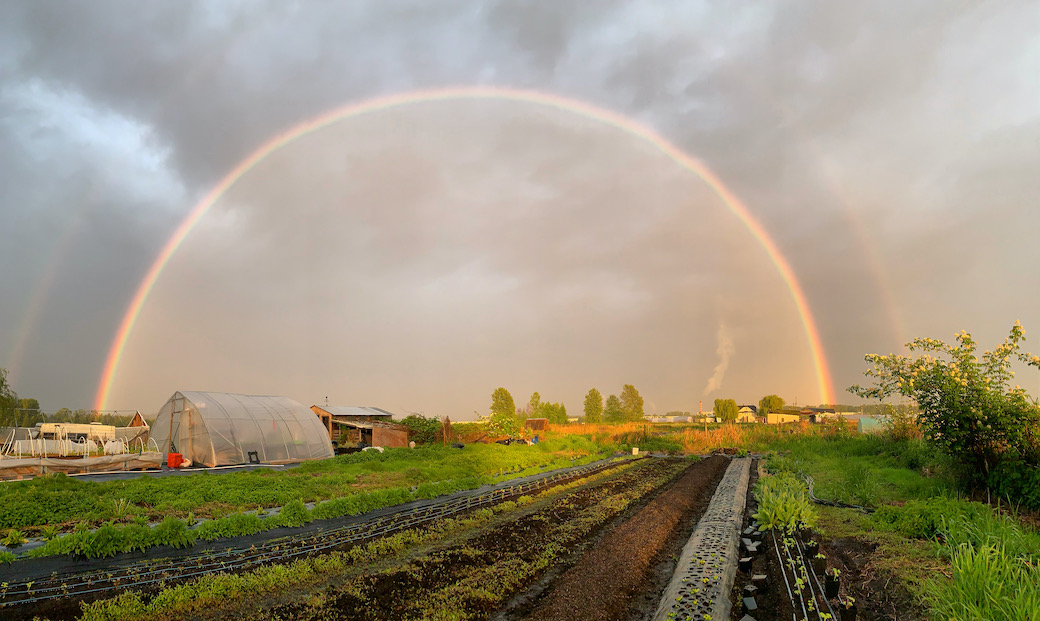 Healthy soil can be a carbon sink, but farmers need to invest in it. That difficult for many who are pinched between high costs of production and low sale prices. Photo by Damaris Reidlinger.
Previous story
Next story

Anastasia Fyke doesn’t have time for millennials. Sort of.

The fourth-generation buckwheat farmer from Manitoba (and a millennial herself) wants to help farmers transform agriculture from Canada’s sixth-largest greenhouse gas producer into a carbon sink. It’s an attainable goal, she said — with enough investment.

“I hear a lot of flak, especially from my own generation, blaming farmers for all these climate things,” she said. “But people aren’t willing to pay for it.”

About eight per cent of Canada’s greenhouse gas emissions came from farms in 2018, with the bulk originating from cattle and the degradation of agricultural soil.

Artificial nitrogen fertilizers, which are used extensively in industrial agriculture and emit gases such as ammonia, nitrogen oxide, and nitrous oxides, are also to blame.

Nitrous oxide is particularly potent: It is over 300 times more efficient at trapping atmospheric heat than CO2, and accounted for about five per cent of Canada’s total emissions in 2018.

These emissions are also increasing, climbing 22 per cent since 1992, a trend that’s predicted to continue over the next decade according to a 2020 report by the National Farmers Union.

And those natural disasters are only part of the picture, she said.

“Our #agriculturalsector is structured so the costs associated with improving the #environmental status of #agriculture aren’t being rewarded by the increased price of #food or an increase in the price the producer receives.” #cdnpoli #climate

Canadian farms are already walking a razor’s edge when it comes to their financial viability, leaving them little flexibility to deal with natural disasters — or reduce their greenhouse gas emissions.

“There’s already so much risk when it comes to farming,” Fyke said.

“(Farmers) take the bulk of risk, and if you look at their profits, gross profits are going up while net profits are not.”

Canadian farmers’ debt, like greenhouse gas emissions, has risen exponentially over the past 20 years, more than doubling since 2000 to reach $115 billion this year.

Meanwhile, their net incomes have steadily dropped, hovering below $10 billion annually since the mid-1980s — rates unseen since the Great Depression. That’s because there has been a sustained increase in the cost of farming (fertilizers, fuel, equipment, seeds) while the price farmers get for their crops have remained relatively stagnant for the past 100 years.

The situation has pushed many out of the business altogether. Between 1991 and 2011, the number of Canadian farmers dropped about 25 per cent, a trend that continues today. It’s also preventing those who remain from pivoting to low-carbon agricultural techniques and, potentially, turn farms into carbon sinks.

“Our agricultural sector is structured so the costs associated with improving the environmental status of agriculture aren’t being rewarded by the increased price of food or an increase in the price the producer receives,” said David Burton, a soil scientist and professor at Dalhousie University who studies carbon sequestration in agriculture.

“Canadian farmers participate in a global food system that is mostly based on the least cost of input, reducing costs, so it becomes very difficult to add to these costs of production and still be competitive.”

But from an environmental perspective, those increased costs are outweighed by the benefits.

Benefits that lie at the heart of Canadian farms: In their soils.

Healthy soil is rich in organic matter like compost or dead plants, Burton explained. That’s what gives it the structural integrity that plants depend on to access oxygen, CO2, nutrients, and water. It also plays a key role in the biochemical reactions that help plants thrive, and provides a home to plants and other soil-dwellers.

Organic matter is why growing a garden on an old compost pile works well — the soil is already primed with the stuff, allowing plants to thrive. It’s also a cheap and efficient way to sequester the carbon dioxide captured in dead plants into the soil instead of letting it escape into the atmosphere.

“The biggest impact our farm has had on emissions is just the increase year over year of the organic matter locked in our soil,” said Arzeena Hamir, a mixed vegetable farmer in B.C.’s Comox Valley.

She relies on farming techniques that minimize the amount of soil she disturbs while consistently adding compost and straw to increase her beds’ fertility and structure.

Still, those practices aren’t widespread. Over the past century, industrial farming has eaten away at the organic matter in soils by cropping farmland and relying on artificial nitrogen fertilizers to feed the plants instead. It remains the predominant model for Canadian farms.

“That impacted the function of soils and their health,” Burton, the soil scientist, explained.

It was one of the factors behind the Dust Bowl and it has made farms both less resilient and sustainable.

Those practices have also made many farmers dependent on artificial fertilizers to replace the essential nutrients entwined with organic matter. Fertilizers that emit nitrous oxide, that are increasingly expensive, and lock farmers into a spiral with significant environmental and financial consequences.

“Investing in your soil is not something that you will benefit financially from in the short term,” Hamir said.

“You’re going to be reaping those rewards in decades. But initially, there’s a cost to that, be it seed or land, that’s not in production.”

She can afford that investment. Hamir owns her farm, ensuring she’ll reap the benefits of better soils, and sells directly to local consumers for a premium price — a business model that’s largely insulated from global market pressures.

Many farmers can’t afford this kind of investment and need to maximize their land’s production each year. Breaking this cycle of high-volume, industrial production on a national scale will take experimentation and federal support and should be a priority for the federal and provincial governments as they develop COVID-19 relief funds, Fyke, the fourth-generation farmer from Manitoba, said.

“Right now, if you’re a farmer, you’re probably struggling to earn a living versus implementing innovative, climate-friendly farming,” she said.

Editor's note: This story was updated on Sunday, August 30th to correct a photo credit for the picture of Arzeena Hamir. The photo was taken by Devon Cooke.

Unless we change course, the US agricultural system could collapse

Here is a link to a paper the

Here is a link to a paper the Rodale Institute in Pennsylvania published that documents the actual trials and projects tremendous capability of soils to absorb and store carbon well in excess of the carbon dioxide emitted in farming practices:

“Total global emissions of greenhouse gases in 2012 were about 52 GtCO2e.2 Annual emissions must drop to ~41 GtCO2e by 2020 if we are to have a feasible chance of limiting warming to 1.5°C.2 Regenerative organic agriculture can get us there. […]

“Simply put, recent data from farming systems and pasture trials around the globe show that we could sequester more than 100% of current annual CO2 emissions with a switch to widely available and inexpensive organic management practices, which we term “regenerative organic agriculture.” These practices work to maximize carbon fixation while minimizing the loss of that carbon once returned to the soil, reversing the greenhouse effect.”

There are also many reports out of USask that document regenerative agricultural trials over years on working farms in Saskatchewan and that measured the amount of carbon absorbed. One trial over a large area found it was in the tens of millions of tonnes in excess of all carbon inputs. The techniques used were dominated by no-till cultivation and legume cover crops that fix nitrogen and carbon into the soil, and seed drills that plant the cash crop through the cover crop that has been rolled down flat and allowed to decompose into the soil. The soil structure and beneficial fungi build up and each cubic metre holds more moisture than traditionally cultivated soils while also allowing better drainage, making these fields both drought and flood resistant.