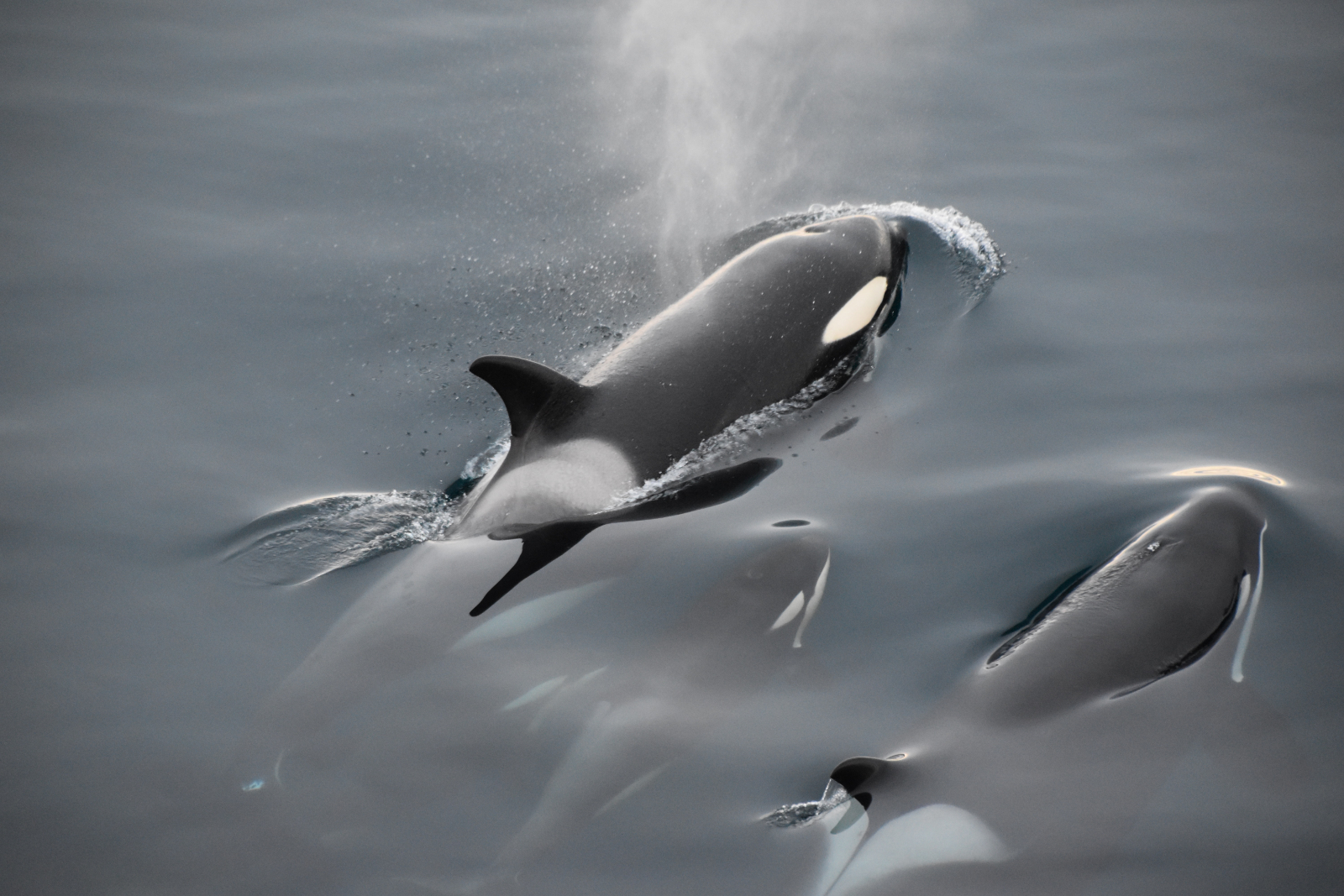 The federal government announced a collaboration with several Indigenous communities to address the problem of noise pollution along the Trans Mountain shipping route, which has led to the detriment of marine life in the area, including endangered Southern Resident killer whales.

Transportation Minister Marc Garneau announced Tuesday that the federal government will dispense $2.5 million over three years to help Indigenous communities protect their coastlines as Trans Mountain projects continue. The funding is part of the Quiet Vessel Initiative, a five-year plan with $26 million pledged to help Indigenous groups affected by the projects.

Indigenous communities raised the issue of underwater vessel noise with the federal government during consultations on the Trans Mountain expansion project. While Trans Mountain itself doesn’t own any tankers (large cargo ships), the expansion led to increased tanker traffic along the commercial shipping route from the Pacific Ocean to Vancouver's harbour. The route cuts through the Salish Sea, a marine environment with a delicate ecosystem that runs along southwestern British Columbia and the northwestern part of Washington state in the U.S.

"With the expansion of the pipeline, tanker traffic WILL increase from about five per month to about 34 partially-laden Aframax tankers per month," according to Trans Mountain.

Great news for the Southern Resident Killer Whale population. Thank you to our coastal partners for sharing this important update! https://t.co/JSOPm7yM4w

The killer whales have been designated as an endangered species in Canada and the U.S. Their population is directly tied to the health of the Salish Sea ecosystem, according to the U.S. Environmental Protection Agency.

In August 2019, after the death of three whales, their population plunged to only 73, where it remains. The decline has been tied to several factors, including increased noise and boat disturbance, according to the protection agency. These killer whales are also particularly prone to extinction because of a low reproductive rate, according to a report by the Canadian government.

The federal government has launched several killer whale recovery strategies. In a 2018 report, models showed higher levels of noise and disturbance would be enough to slow down population growth and worsen the level of whale decline.

The government provided a list of 29 Indigenous communities that are eligible for funding as part of the initiative. The groups have until Nov. 20 to apply.

Noise pollution is devastating the already endangered killer whales in the Salish sea. @Transport_gc is looking towards Indigenous communities to help stop it.

Editor's note: This article was corrected to make it clear that tanker traffic will ONLY increase after the planned Trans Mountain pipeline expansion has taken place.

It's hard to understand

It's hard to understand practically what can be done beside changing the engine and drive systems of the ships or keep them out of the Salish Sea. Perhaps develop new electric motors moving the ships at very low speed ... what about the 9 knot tidal flows? Are Indigenous communities going to get money to force change to happen? Is this money to run protests and create blockades? Otherwise, what can be done if it's not to reduce the traffic or change the ships?

This is such a bit of BS, the

This is such a bit of BS, the tankers which will be carrying the stuff offshore have to go through the narrow, strong current areas near “turn point”, the only way from Burnaby to the Pacific. That’s where the whales eat and ships have to maintain a certain speed to get through. If anyone thinks the corporations who are carrying this dilbit will slow down, worry about whales or not travel during mating season you are DREAMING! The areas where there is real concern are all VOLUNTARY! (Red lines on the map) The only concern is money and how fast we can make it, the Salish sea will be collateral damage. Most folks will fuss about their whale watching trips and rights to fish being restricted but the REAL problem will be the tankers. Thanks for nothing!! We need to stop the KMX. Cheerio from Salt Spring Island off our west coast.

Your estimation of corporations carrying dilbit would seem to have already proven itself, even before they get into the "main channels."
Two things bother me:
"The federal funding announced Tuesday is intended to help Indigenous communities along the coast evaluate “promising” technologies, ship designs, and revise shipping practices to help reduce noise pollution from underwater vessels."

How, in heaven's name, are indigenous communities along the coast to "reduce noise pollution from underwater vessels? Not that it was my understanding that dilbit shipping was being done by submarine ... much less by indigenous peoples.
It seems to me a massive expenditure for 100 jobs: on the order of $1.5 million per job. You can bet your booty they're not paying indigenous people salaries on that order, or even if that were spread over, say, a decade, 1/10 that amount.
I agree totally, "Thanks for nothing," with the minor quibble that it's way less than nothing, it's a large expenditure for nothing.
Anyone who wants to stop TMX has to be dealing with the concept of shipping liquid hydrogen fuel abroad (the Canadian government, and the petro industry) are still fixated on the idea that they can legitimately count in their own GWG reductions (non-existent) the reductions of off-shore purchasers of their clean-burning product.
That prospect has by now been widely telegraphed in mainstream news. I first heard of it in an e-mail I got from a liberal MP in ... gosh ... winter, still? Maybe last fall? No one likely to form government any time soon has the least bit of interest in shutting down the oil industry.
Meanwhile, the BS hype from the main GWG-emitter provinces is around "competitiveness" ... they might not have noticed, but their product hasn't been "competitive" for some time now ... even without GWG-emissions reductions. Their cant is, of course, that they "can't" (sorry: bad pun, I know!) reduce emissions till the rest of the world does. Newsflash, Messrs. Kenney, O'Toole and Co.: Canada and Australia are the biggest GWG "polluters" in the entire world. And while I'm no expert on the matter, I'm not seeing a lot of competition from Australia insofar as Mr. Kenney's province goes!

Re: “Tanker traffic has

The current tanker rate is zero per month. The last tanker loaded and left on June 20, almost three months ago. It went to St. John, New Brunswick as a trial in an attempt to develop a new market since other markets appear to have been lost.

I suggest the economics behind this project are even more suspect than when Texan Rich Kinder owned the pipeline and threatened to cancel the expansion project, giving a two month deadline if the feds couldn't guarantee a reduced consultation period. Trudeau fell for it and tripped over himself scrambling to open the public spigot to purchase it. All in the "national interest" no less, and to sell carbon to fund renewables to achieve Net Zero by 2050, so stated the incoherent logic. He accomplished that over 100 times as quickly as he did to enact a simple carbon tax.

This is an export pipeline. CAPP pulled extra hard on the strings, making its political marionettes jump high in the air, jerk their knees and dance jigs all over the landscape while extolling the talking point virtue of selling to Asian markets instead of the Americans who pay a 'discounted' price for an inferior product, mainly because it requires very expensive additional steps to refine into higher value products, like gasoline.

The fact is, Asian refineries capable of handling heavy oil will not pay a premium price for a low-grade feedstock. They will, however, buy diluted bitumen at an even steeper discount than the Americans by deducting trans oceanic shipping costs. Most of the tankers, what few of them that will actually sail, will turn left at the entrance to the Strait of Juan de Fuca and set course for California refineries to fill a void left by a ban on heavy Venezuelan oil. And the same old discount is in play which, in fact, is a fair price for a low quality product from a jurisdiction that hates the notion of creating value-added jobs at home when applied to processing raw resources.

But let's take the Trans Mountain projections at face value for a moment. Should their magical thinking actually come true -- even in the face of millions of electric cars entering the market this decade while accompanied by record investments in renewables -- 400 tankers a year transiting the international Salish Sea in fact translates into 800 when you include the return trips carrying condensate and other petroleum products. In other words, some 70 billion litres a year of petroleum could be floating on the water in addition to all the other hazardous liquids (existing tankers, bunker fuel, etc.). The tankers may be double-hulled, have duo tethered tugs, employ the best pilots in the world, yada yada, but that still won't prevent accidents caused by other vessels losing power from mechanical failure or whatever. One major spill will not just have tragic physical consequences lasting generations, but also generate international lawsuits in the tens of billions.

Addressing marine noise in that context is pure spin.