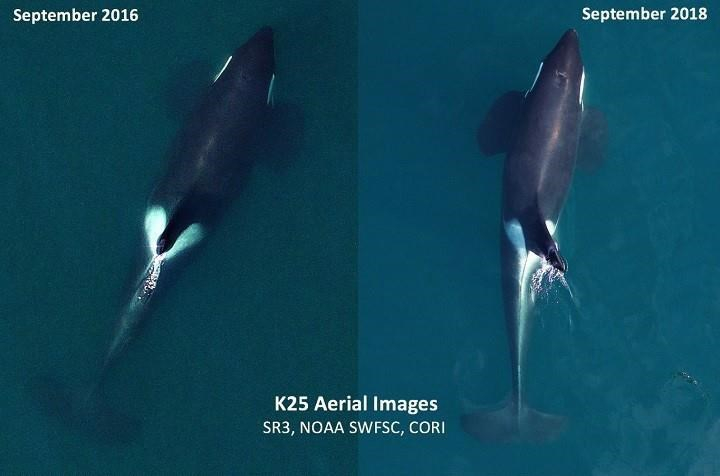 Three southern resident killer whales have been declared dead by the Center for Whale Research, bringing the population down to 73.

The dead killer whales are a 42-two-year-old matriarch known as J17, a 28-year-old adult called K25, and a 29-year-old male called L84, the institute posted on its website.

"These whales are from the extremely endangered southern resident killer whale population, that historically frequent the Salish Sea almost daily in summer months," it said.

Experts had expressed fear after two southern resident killer whales, J17 and K25, hadn't been seen for a few months.

Scientists from the National Oceanic and Atmospheric Administration in the United States released photos in May taken by a drone that showed J17 had deteriorated in health since she was assessed last fall.

The organization said J17 was showing the condition known as "peanut-head," which indicates a significant loss of fat, or blubber, around the head.

A little over 70 southern resident killer whales form this group of exclusively salmon-eating orcas known as J clan and the family is further divided into three groups, or pods, known as J, K and L.

"That's definitely not good, not good at all," he said.

"You want to see those numbers heading the opposite direction so every time we lose one of these animals it really brings us closer to losing the whole population."

Haulena said he's hopeful that some of the measures put into place recently by the federal government can help turn things around for the animals.

The Department of Fisheries and Oceans announced a number of rules to protect these whales off British Columbia's coast, including requiring ships to stay 400 metres away from the animals, closing a few salmon fisheries, and implementing initiatives to support habitat protection and restoration of chinook salmon.

Haulena also said he has seen a change in the behaviour of the orcas.

"I think it's interesting ... this year they are not spending nearly as much time as they usually do in the interior waters through Puget Sound and the Georgia Strait," he said.

"The L-pod I don't believe has entered into the Salish Sea at all this year. They've just been seen off the west side of Vancouver Island or at least in outer waters this summer."

While it is hard to say for sure why there is a behavioural change, Haulena said it could be because the whales are looking for alternative places to feed or are moving away from noise.

"Maybe they found a better place to forage," he said. "It's very, very hard to tell but we need to look into (it)."

The Center for Whale Research says in its statement the whales now rarely visit the core waters of its designated critical habitat including Puget Sound, Georgia Strait, and the inland reach of the Strait of Juan de Fuca "due to the scarcity of suitable Chinook salmon prey."

A new female calf, J56, was reported a few weeks ago, but Haulena had said earlier that there are more animals being lost than being born, and calf mortality for cetaceans can be as high as 50 per cent.

"I think we're at a critical point for sure," he said Tuesday. "I think that the population can't afford to lose too many more and really things need to turn around soon."

By The Canadian Press | News, Politics | June 2nd 2019
State Of The Animal