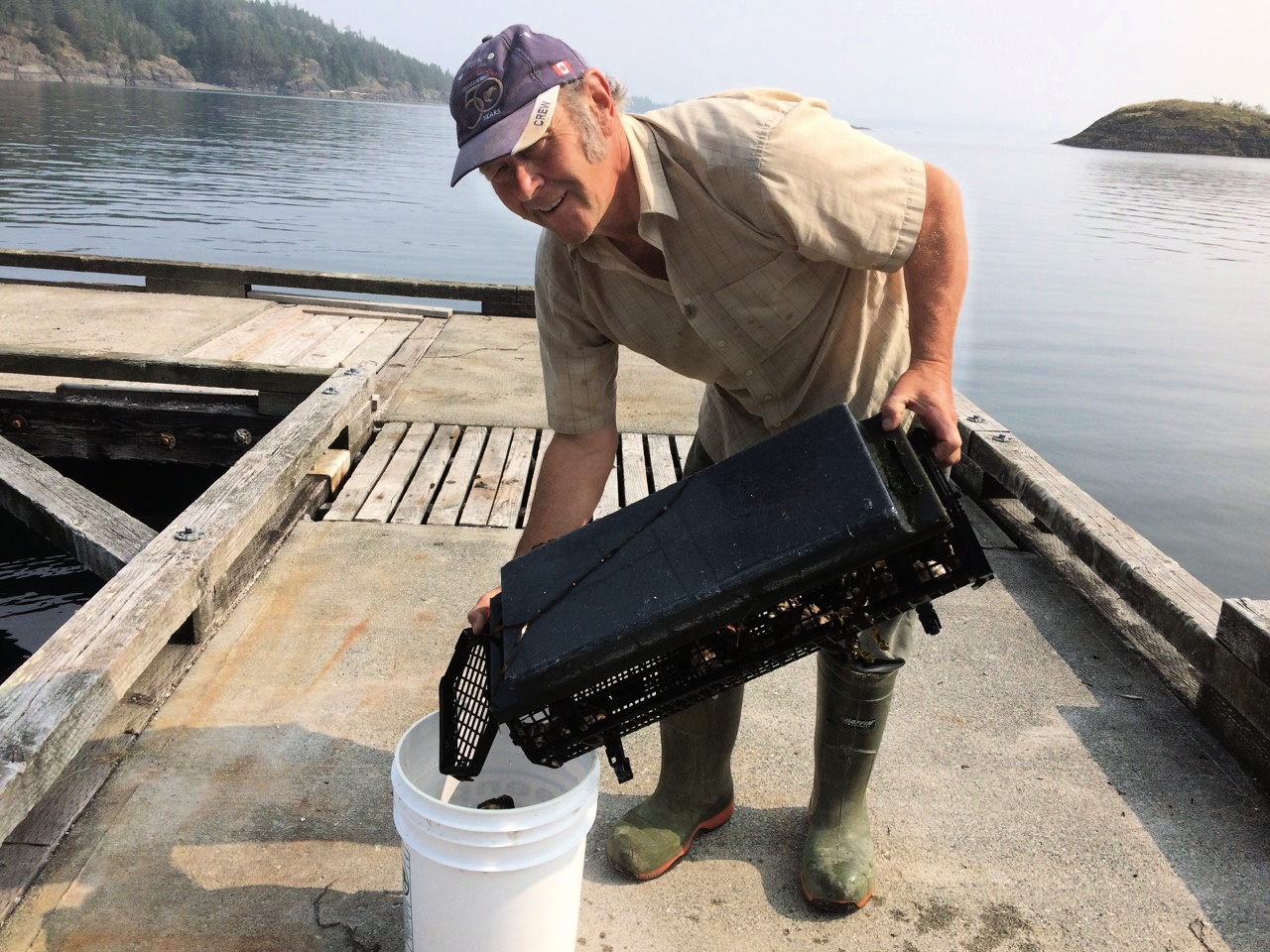 B.C. oyster farmer Steve Pocock said he can’t see many upsides for shellfish aquaculture when it comes to dealing with the effects of climate change.

“I’m struggling to see where there would be any real potential benefits,” said Pocock, owner of Sawmill Bay Shellfish and someone who has been in the business for 12 years.

“An oyster may grow faster in warmer water, but that’s not necessarily a good thing,” he said.

Pocock has six oyster leases on or near Read Island, which is between Quadra and Cortes islands.

All the islands are part of the Discovery Islands archipelago wedged between Vancouver Island and the B.C. coast.

The area has long been a hotbed for B.C.’s shellfish farming industry because of its clean, remote and cool waters, said Pocock.

And oysters accounted for 61 per cent (almost $26 million) of the wholesale value of all farmed shellfish in the province.

Recent research out of the University of British Columbia (UBC) indicated shellfish aquaculture might benefit from climate change by gaining a 46 per cent increase in the marine areas favourable to farming Pacific oysters.

"You have this whole mix of stressors that these oysters are trying to adapt to,” VIU researcher Timothy Green, on the need for a selective breeding program to mitigate climate change impacts on shellfish farming. @viunews @UBC #climatechange

The sector is more likely limited by market demand and where seafood processing sites are based on the coast, said Green, a Canada Research Chair in Shellfish Health and Genomics at VIU.

Plus, ocean acidification and new diseases tied to warming ocean waters — both significant threats to the viability of B.C.’s shellfish aquaculture sector — would likely negate any potential benefits from climate change, he said.

“So, you have this whole mix of stressors that these oysters are trying to adapt to,” Green said.

One of the biggest problems for shellfish worldwide and in B.C. waters is ocean acidification, Green said.

Acidification takes place as the increasing carbon in the atmosphere gets absorbed by the ocean, turning waters more acidic.

The acidification then drops the levels of calcium carbonate in the ocean, which baby oysters, or spats, and other shellfish need to build their shells, Green said.

Another threat to B.C. oysters is new pathogens brought about by warming oceans and global transport, he added.

“We have diseases that are moving around the world with increased globalization and vessels moving between ports,” Green said.

“They're often spreading toxic species of algae, as well as other pathogens of oysters.”

Green is studying the genetics of shellfish adaptation to stressors and establishing a selective breeding program to make the Pacific oyster more resilient.

“So, we have breeding program and a research program trying to look at how oysters actually adapt to ocean acidification and other disease stressors that are also alarming,” he said.

“Hopefully, in the next year we'll start to see how the baby oysters we’re producing fare with their laboratory challenges and these diseases.”

Although B.C. oysters, and shellfish in general, face challenges from global warming, they are a good way to help stem climate change, Green said.

“I can see that people will start to look more closely at the sorts of foods they are eating and making sure they are sustainable,” Green said.

“Shellfish ticks a number of those boxes. And so, I can see a market drive towards not just oysters, but other shellfish we produce, like scallops, mussels and clams.”

“It's basically the lowest carbon producer per gram of protein of all animal protein sources, including some vegetable proteins,” he said.

“There is very little fossil fuel use and no emissions from oysters causing green house gases.”

And in doing so, they improve water quality and reduce excess nutrients that can cause harmful algal blooms and can result in oxygen starved marine zones, research shows.

Though oysters may mitigate climate change, Pocock worries about their ability to withstand negative impacts themselves.

The shellfish farmer hasn’t noticed a gradual trend toward warming waters, but rather ocean temperatures ricocheting up and down.

In May 2019, the surface temperature of the waters around his shellfish operations shot up to 20 degrees Celsius.

“That is quite exceptional for that time of year,” Pocock said, adding marine heat waves can lead to increased mortality.

“I’m concerned that oysters will find it stressful,” he said.

“And I’m more apprehensive as to what the future will bring.”