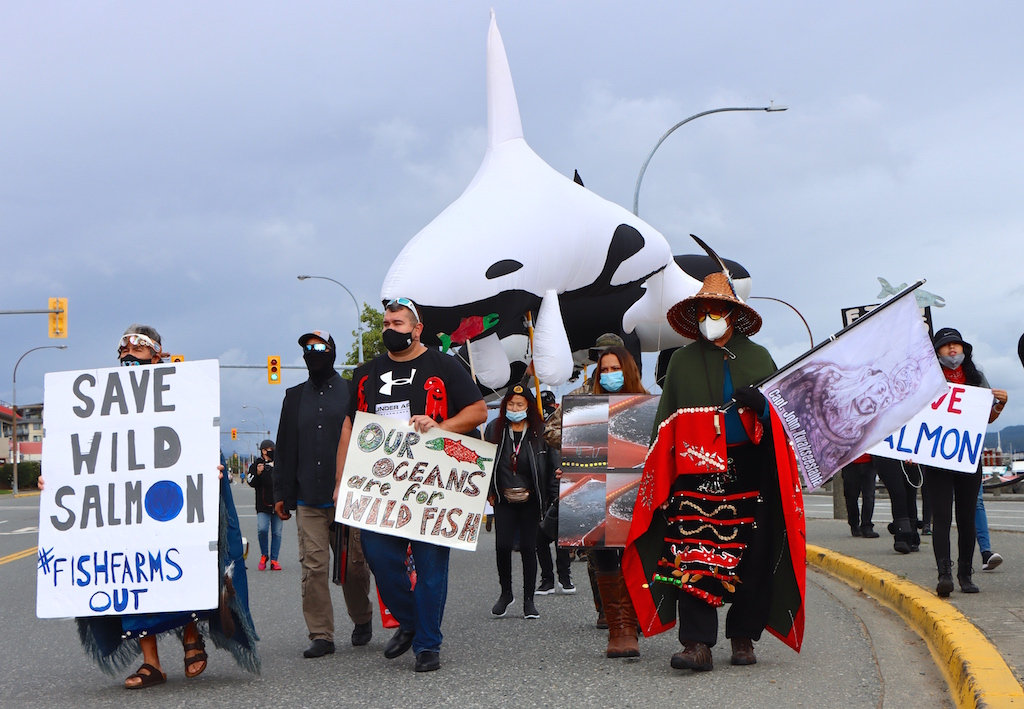 Studies show that contentious fish farms in the Discovery Islands pose little risk to wild salmon, therefore they will not face immediate closure, the Department of Fisheries and Oceans (DFO) said Monday.

Nonetheless, a final decision on the fate of 18 open-net pen operations in the region will be delayed pending consultation with seven area First Nations about whether to renew the region's fish farm licences, which are set to expire in December.

Though it's unclear if all the region’s First Nations want the farms removed from their territorial waters, many don’t have confidence in DFO's proposed consultation process, describing it as long overdue, inadequate, or both.

The DFO decision takes place as Fraser River sockeye salmon runs are predicted to be 293,000 fish, the lowest number since records began in 1983.

Last year’s low returns had set the previous record low, while the 2018 season saw among the lowest returns in the previous four decades.

The farms were facing removal by Sept. 30, a deadline set by the Cohen Commission report that examined the decline of Fraser River sockeye.

The 2012 report recommended the fisheries minister close farms in the region — which lie along a critical sockeye salmon migration route — unless DFO could prove they posed minimal risk to wild fish.

Darren Blaney, chief of the Homalco First Nation, said DFO has never reached out for his input on salmon farms in the Discovery Islands despite having eight years to do so.

And he’s worried First Nations' concerns won’t be heard or acted on after this consultation either.

“Our Aboriginal rights don't even seem to be part of the equation, because (DFO) is definitely going to bat for the fish farms,” Homalco Chief Darren Blaney after DFO finds Discovery Island fish farms don't pose risk to wild salmon. @FishOceansCAN

“Our Aboriginal rights don't even seem to be part of the equation because (DFO) is definitely going to bat for the fish farms each and every time,” Blaney said Monday.

The ministry needs to take First Nations rights and views into account when making decisions about the risks of open-net pens in the Discovery Islands, he added.

The Homalco Nation has been trying to get DFO to come to the table during treaty negotiations to discuss fish farms in the area for some time, said Blaney.

The Liberal government should stick to its campaign promise to move fish farms breeding Atlantic salmon onto land by 2025, he said.

However, the federal government walked back that promise, and Fisheries Minister Bernadette Jordan now says DFO will devise a transition plan for open-net pens by that date.

Sea lice — which can concentrate in farms and endanger the survival of juvenile salmon migrating through the area — was not among the nine diseases studied.

The federal government wants strong, collaborative relationships with Indigenous peoples regarding the management of the marine environment, said Minister Jordan in a press release.

“We recognize the concerns raised by partners that these particular farms may not be the best fit for this location nor for the adjacent communities,” Jordan said.

She promised the ultimate decision on the farms would factor in “area-based” Indigenous knowledge, social, economic, geographic, and environmental factors.

Though concerns around Discovery Islands salmon farms were raised in 2012, DFO wanted to wait until scientific risk assessments were complete before consulting with area First Nations on the issue, the minister’s office said.

At least two First Nations within the Discovery Islands region warned DFO they have conditions they want met before they’ll sit down for talks.

The We Wai Kai and Wei Wai Kum Nations said they wouldn’t be accepting any unilateral decisions by DFO about open-net salmon farms in their territorial waters.

In a written response to the minister’s invitation, We Wai Kai Chief Brian Assu and Wei Wai Kum Chief Chris Roberts said the farms are in their core territory, and they want DFO to talk with them one on one.

“A generic regional approach to consultation by DFO ignores this position and is not conducive to meaningful engagement with our specific concerns regarding impacts to our title and rights,” the chiefs said.

Assu and Roberts said they are pursuing a meaningful role in protecting Fraser River salmon, but first and foremost, they want a collaborative partnership between their Nations, DFO and the provincial government that recognizes their decision-making authority in their territory.

The chiefs didn't say if they are seeking the removal of open-net pens from the Discovery Islands region.

Other First Nations want a seat at the consultation table

More than two dozen First Nations living along the Fraser River who depend on the salmon fishery are demanding to be included in the consultation process, even if they have no territory in the Discovery Islands.

Salmon is an essential nutritional, social, and cultural food for them all. An essential food that has been increasingly scarce.

No sockeye fisheries — including First Nations’ food, social, and ceremonial fisheries, which are an Aboriginal right and protected under Section 35 of the Constitution — opened this year.

“This is a fishery that used to be in the millions, there used to be enough for everybody” said Robert Phillips, political executive with the First Nations Summit and a member of the Northern Secwepemc te Qelmucw (Shuswap) of the Canim Lake First Nation.

“If we cannot feed ourselves, like we’ve done for generation after generation, for hundreds of thousands of years, then you know there’s a problem.”

It’s a watershed-wide connection to the salmon that DFO has omitted from its impact assessment process, which in turn has made it easier to narrow the scope and length of required consultations, explained William Nikolakis, a lawyer and professor at the University of British Columbia focused on Aboriginal rights and natural resource law.

The federal and provincial governments are required to consult with First Nations when the government determines its actions will negatively impact a First Nation’s aboriginal rights.

The comprehensiveness of that consultation is determined in relation to the project’s anticipated impact on these rights.

So, if the government claims there is no direct relationship between open-pen fish farms in the Discovery Islands and Fraser River First Nations’ loss of access to their food, social, and ceremonial fisheries, DFO is not required to consult them on its decision.

That’s what Nikolakis sees happening here, with the DFO narrowing the scope of its scientific review to a level that excludes the ecosystem-wide impacts of open-pen fish farms — and the extensive consultation process those findings could trigger.

“(DFO) made a decision of convenience,” Nikolakis said.

And their view, Phillips said, ignores the obvious: Salmon are a migratory species.

“Wild salmon are not one place. They go in the ocean, they go up rivers, they spawn. All First Nations (who rely on them) should be consulted.”