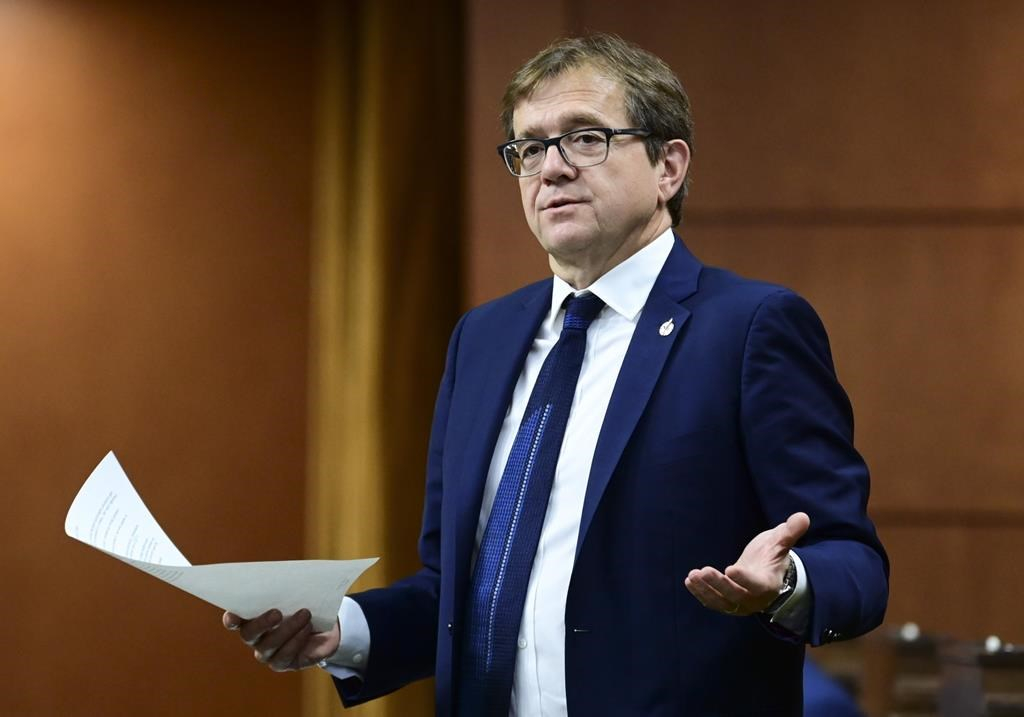 Minister of Environment and Climate Change Jonathan Wilkinson answers a question during question period in the House of Commons on Parliament Hill in Ottawa on Tuesday, Oct. 6, 2020. THE CANADIAN PRESS/Sean Kilpatrick
Previous story
Next story

That means it’s the end of the road for plastic straws, stir sticks, carry-out bags, cutlery, Styrofoam dishes and takeout containers and six-pack rings for cans and bottles.

The proposed ban still has to go through the government’s regulatory process, but Wilkinson said the goal is to have it in place by the end of 2021.

He also said a ban is just one part of a zero-plastic waste strategy that includes making plastics that aren’t being banned easier to recycle by standardizing their production and creating a market for recycled plastic by requiring most plastic packaging to include recycled material.

A discussion paper released today suggests that at least half the content of some plastic items should be recycled material by 2030, the same year more than half of all plastic packaging needs to be reused or recycled.

Canadians throw away more than three million tonnes of plastic every year, and less than one-tenth of it is recycled. Even when we think it’s being recycled because we put it into the blue bin on the curb, there are so few options for recycling here or abroad that much of that is still eventually trucked to a garbage dump.

"I know it is presently hard to come back from the grocery store without a single-use plastic item, particularly around packaging on food," Wilkinson said. "You use it, you throw it in the recycling bin and more often than not it ends up in a landfill. This has to change."

Sarah King, head of Greenpeace Canada’s plastics and oceans campaign, said Wednesday this proposed plastics strategy is nowhere close to the full ban on producing single-use plastics that is needed.

She said at the very least, bottles and coffee cups and lids needed to be on the list of banned items, and was disappointed there was no funding or specific plan to show a path toward getting more plastic recycled.

"I think the government in general thinks this is a balanced approach but the reality is this is an urgent situation," said King.

The proposed single-use plastics ban still has to go through a regulatory process, but the federal government's goal is to have it in place by the end of 2021.

Wilkinson said the new standards for plastic content will spur investments in a domestic recycling industry that is currently quite small. A 2019 report commissioned by Environment Canada said there are fewer than a dozen recycling companies in Canada.

The Alberta government announced Tuesday it wants to position itself as western North America’s epicentre for plastics diversion and recycling by 2030.

Wilkinson said he thinks that dovetails nicely with Ottawa’s plastics plan, which he stressed is not zero plastics, but rather zero plastic waste.

He stressed repeatedly bans are only going to be applied to a small number of products that are really hard to recycle.

"Plastics are very useful and we all use them," he said. "We just need to make sure that we’re not throwing them in the landfill or dumping them in the ocean. We need to ensure that they stay in the economy and that is exactly what this plan is aiming to do."

She said plastic continues to be the foundation of the modern world and the province’s petrochemical industry needs to be able to take advantage of that.

"They have to approach everything as in do no harm," Savage said in Calgary Wednesday. "Don’t damage us any further. Don’t harm us in Alberta. Stay in your own lane. Stay within your own constitutional bounds and let Albertans get back to work."

Canada intends to add plastics to a list of toxic items under the Canadian Environmental Protection Act, a designation that comes after a scientific assessment found plastics to be harmful. Designating them as toxic is a required step in order to ban the planned items.

A need to beef up domestic recycling arose in 2018, when China stopped accepting foreign plastics for recycling because it was tired of that material arriving loaded down with garbage that could not be recycled.

France began phasing in a ban in January, starting with plastic plates, cups and cotton buds. Straws and cutlery will be added in 2021, and tea bags, fast-food toys and takeout containers in 2022.

My grocery bags are not

My grocery bags are not single-use. I re-use them.