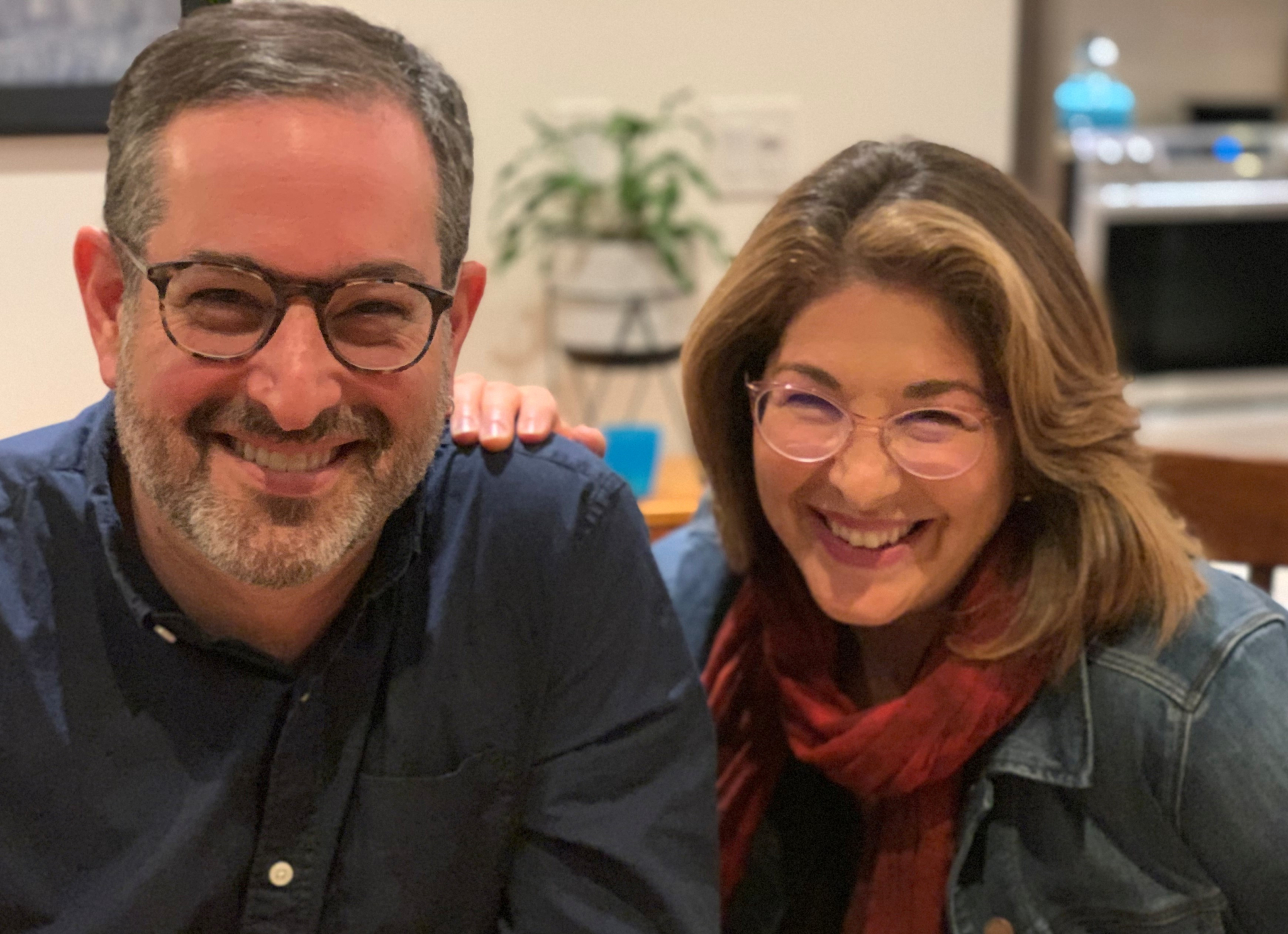 Seth and Naomi Klein are brother and sister activists and authors. Photo submitted by Seth Klein
Previous story
Next story

She is author of some of the most provocative social commentary of this century so far: No Logo, The Shock Doctrine, This Changes Everything.

He is the behind-the-scenes policy analyst who championed a carbon tax and the groundbreaking Climate Justice Project and has just released a book of his own; A Good War: Mobilizing Canada for the Climate Emergency.

Naomi and Seth Klein are probably Canada’s most famous sibling activists, but you could say they are just following in the family business.

“My grandfather was an artist and one of six guys who started the union at Walt Disney who led a very long and nasty strike just before the U.S. entered (the Second World War),” Seth says.

The strike was a success, the union was founded, but all the organizers were fired, including his grandfather.

“After the war, Disney had them all named to the House Un-American Activities Committee. I like to joke that my sister and I can’t remember a time from the very youngest age that we didn’t hold these dissonant views; that we really liked Walt Disney movies, but he was a bastard,” Seth says with a wry laugh.

They grew up Canadian because their parents fled the United States in 1967, shortly after their father, Michael, received his draft notice for the Vietnam War.

“My parents always went to demonstrations. Our family car trips were listening to music from the civil rights movement. My mom was part of Studio D, so all of her friends were making films about political issues, like nuclear war and disability rights and environment,” Naomi says in a separate interview.

“We grew up in a very political environment. It was kind of like the air we breathed.”

Seth, two years Naomi’s senior, fell into activism early. At age 14, he and a group of friends founded a high school nuclear disarmament movement. By the summer of 1986, the Students Against Global Extermination set out on a coast-to-coast tour hosting youth rallies against the bomb.

“He found out that there were these weapons out there that could wipe out humanity, and he just wasn’t able to live with that,” Naomi says. “Most of us can live with incredible cognitive dissonance — we can know that we’re making the planet uninhabitable, we can know that there are nuclear weapons that could wipe us out, and just not think about it.

“Seth didn’t have that ability as a kid. When he found out about the arms race, he was destroyed by it. He couldn’t sleep until he figured out a way to do something about it.”

That’s not to say Naomi was apolitical. At age 12, she delivered a memorable speech at her bat mitzvah about racism in the Jewish community.

“It caused a bit of a stir at my local synagogue,” she says. “I was interested in the issues and I always wrote … but it wasn’t until I was in university that I became part of activism, but more as a writer.”

Distant during their high school years, it was a family crisis in 1987 that brought the brother and sister closer. Seth was 19 and Naomi 17 when their mother suffered a debilitating stroke and nearly died.

“That brought us together,” Seth says. “A couple of years after that, Naomi ended up joining me at the University of Toronto.”

But Naomi didn’t just end up at U of T with Seth. She went there to be closer to her brother.

“I don’t even think I applied anywhere but U of T. I just wanted him as an anchor in my life,” she says. “Things were very uncertain with my mom, and I think I just wanted to be close to family.”

At university, Seth discovered a passion for economic and social justice, while Naomi delved into the campus press, rising to editor-in-chief of The Varsity newspaper. Together, they founded the “Free School,” a series of informal seminars on the issues of the day.

Then another formative moment in their shared history occurred on Dec. 6, 1989, when a gunman walked into the École Polytechnique in Montreal and killed 14 women.

“I heard it on the radio and I remember going down the hall to join her and couple of friends and getting them to turn on the radio,” Seth recalls.

Naomi ended up hosting a Free School meeting on the shooting and writing about it in the student press.

“That was the beginning,” Seth says. “When Naomi started to get political, she always did it in a brave way.”

After university, Seth moved West where he was a founder of the BC Poverty Reduction Coalition, among other social justice work, before becoming the founding director in British Columbia of the Canadian Centre for Policy Alternatives, a progressive think tank. By the early 2000s, the CCPA was increasingly involved in climate justice, and in 2007, launched the Climate Justice Project.

“The problem is that once you’ve begun that work and you’re obliged to follow and read all the latest scientific evidence, you just become increasingly alarmed,” he says.

Seth left the CCPA a year and half ago, seeking a change in tactics on the climate crisis.

“I couldn’t keep doing what I was doing. You look at our GHG emissions going back 20 years and it’s just flat. That chart, to me, is kind of a physical manifestation of Einstein’s definition of insanity: To keep doing the same thing over and over again and expecting a different result. I felt a need to shift,” he says.

That shift resulted in his new book, which was released in September.

Prior to writing his book, Seth edited several of Naomi’s, beginning with No Logo, published in 1999, and followed by The Shock Doctrine (2007) and This Changes Everything (2014). She has called him her “secret weapon,” telling Publisher’s Weekly that she “would just call him at any time and demand a tutorial on monetary theory.”

Seth is effusive about his sister’s work.

“Naomi is both a much better writer and much smarter. You can put that in print,” he says.

Naomi, in turn, has praise for Seth’s book and his work on hers.

“Seth has always been one of my first readers for all my books,” she says. “He has been that for me for decades, and that’s why I’m so happy he’s written this book because I think he’s a brilliant mind and a very careful researcher.”

Climate activist Tzeporah Berman first met Seth 30 years ago while backpacking with friends in Greece, but they didn’t meet again until Seth began work at the CCPA. More recently, she approached him about working with her to engage cities on the Fossil Fuel Non-Proliferation Treaty initiative, which she chairs.

Seth is a “radical pragmatist,” she says. Under his guidance, the CCPA worked to provide a road map to address climate change, she says.

“He’s brilliant, he’s articulate, and yet he is almost egoless in the gracious and compassionate way that he approaches dialogue. It’s never about Seth when you’re talking to Seth.”

“Naomi is a thought leader on climate change and climate justice issues internationally,” she says.

“You meet a lot of people in this work who are good writers or good speakers or good negotiators. And then sometimes you meet people who live and breathe this work, who have a true passion and sense of purpose and dedication. I would say both Seth and Naomi are that.”

It doesn’t seem to strike Seth or Naomi as unusual that the brother and sister would find themselves both in the trenches of the most urgent crisis facing the world today. Naomi’s husband, Avi Lewis, and Seth’s wife, Christine Boyle, are also active in the movement.

“I think there was an expectation early on, a bit of a sense of family legacy,” Seth says.

my heroes. We fail to listen

my heroes. We fail to listen to their analysis at our peril.
Mark Blyth say: if we don't act now on climate crisis we're F,k
If we act and it doesnt work, we're F'd
If we act and it works, good for us.

Thanks for connecting these

Thanks for connecting these two siblings through their activism. Why almost nothing in your article about their father? I heard a CBC radio interview with Dr. Michael Klein and was fascinated by his work with midwifery. https://www.cbc.ca/radio/whitecoat/meet-dr-michael-klein-canada-s-father...

It would be interesting to witness a conversation between the Klein siblings and Mark Jaccard, and compare Jaccard's "Citizen's Guide to Climate Success" to their work. Jaccard is a bit critical of the political anti-capitalist narrative in some works by climate activists, and believes the best way to achieve success today is to propose technical regulatory climate policy to the politicos rather than policy cloaked in political slogans. His view is studded with examples of policy that failed as much from overt ideology (right and left) as anything else.

He is also good at self-critique, which he assumes on BC's carbon tax initiative which he helped to design. He sees the tax as a partial failure because it was subjected to harsh political rhetoric and was never expanded to the levels it should have been, which was a political calculation. He now sees regulation of carbon pollution as a better alternative to a tax, the latter being anathema to righteous conservatives, though progressives see it as merely placing a price on carbon.

I am inspired by Seth and

I am inspired by Seth and Naomi's presence in our nation. Although I don't have the ability to write the way they do and to understand the sciences, I sense their ideas and writing is essential to our human survival.

Currently our economic sytem is thwarted by psychopaths and our political system has been destroyed by the trends that nihilate sound values for a squandering profit.