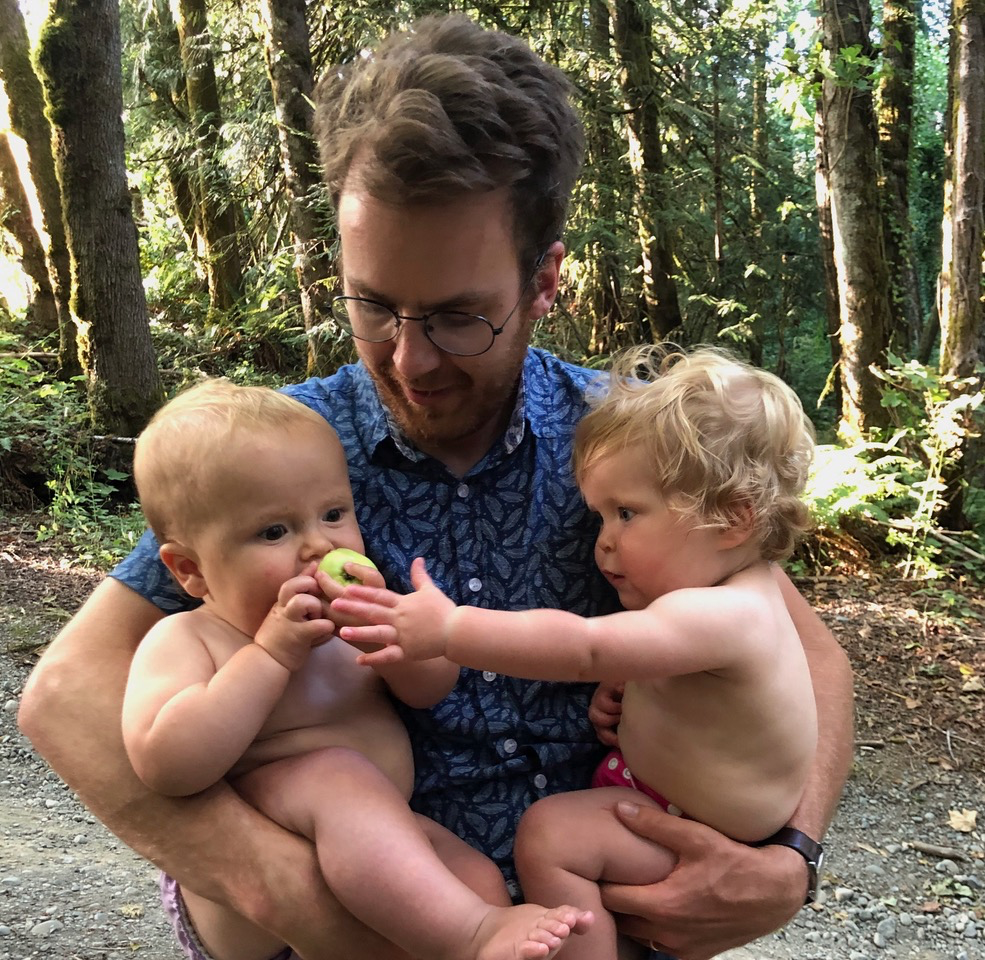 Galen Armstrong is the father of twins and an organizer with For Our Kids, a national network of parents and grandparents asking for meaningful action on climate change. Photo submitted by Galen Armstrong
Previous story
Next story

As part of a series highlighting the work of young people in addressing the climate crisis, writer Patricia Lane interviews Galen Armstrong.

Galen Armstrong, 36, is the father of twins and an organizer with For Our Kids, a national network of parents and grandparents asking for meaningful action on climate change. We chatted when toxic wildfire smoke in B.C. was making the air unsafe for babies to breathe. From the moment his children were born, Armstrong knew his job would be to protect their futures. He says protecting the world from the devastating effects of climate change is up to parents and grandparents: “It's as simple as that.”

Tell us how your childhood influenced your path today.

I spent summers camping on Kootenay Lake and the Purcell Mountains with my dad. My mom loved the natural world. I always felt I belonged there. My Grade 4 teacher had us do an advocacy project. Mine was to protect the endangered aye-aye of Madagascar. I was hooked.

My grandmother modelled community responsibility. She worked in soup kitchens and helped her neighbours. She died this summer and I miss her a lot. But she didn’t really get climate change as being meaningful to her life. It is really ironic that as we speak, her kids and grandchildren are living in her old house because their own homes are not safe from the current fires in the U.S.

Now that I am a dad, I need to combine both that sense of community responsibility and my awareness of climate change as the greatest threat to children. While I worry about my own kids, there are millions of children for whom polluted air is normal and their lungs don’t develop properly. Having my own kids means I think about everyone else’s kids, too.

Tell us about your work. Why does it matter and who is involved?

Meet Galen Armstrong, 31, the father of twins and an organizer with For Our Kids, a national network of parents and grandparents asking for meaningful action on #climatechange.

Teenagers involved in #FridaysforFuture helped their parents understand the urgency of the climate crisis. But it can be hard to know what to do. For Our Kids was formed to provide a national platform for parents and grandparents to choose how to get involved.

Just over a year later, with chapters in 16 Canadian cities, For Our Kids is already making a big difference. Parents and grandparents persuaded the Victoria school board to declare a climate emergency, successfully lobbied Ottawa city council to remain committed to public spending on climate adaptation and are pressuring the federal government for a green and just recovery. They’ve hosted town halls with parents and politicians. Their neighbourhoods are dotted with green hearts thanking climate champions. In one particularly creative tactic, they wrote cards from their “2050 selves” thanking decision-makers for being champions for a better future for their children in the key year of 2020.

The moms and dads and grannies and grandpas in this country are on the move.

Parents and grandparents are busy! What motivates them?

Urgency. Every decision we make now matters a lot. We see disaster as inevitable within the lifetime of our children if we do nothing. We have run out of time for slow change and for making mistakes. The trickle-down economic system and the way the tax system lets wealthy people get wealthier without paying their fair share — we have to do better. The pandemic offers us a lens to learn what we can do in a true emergency. Just as the government has created thousands of jobs to protect vulnerable seniors from the coronavirus, it can create thousands of jobs to protect our children from a destabilized climate.

Why do the voices of parents and grandparents matter?

Politicians listen to determined moms and dads. Politicians know that parents’ fierce love for their children and their ability to get organized make families a critical constituency. Politicians would rather be on the right side of that conversation.

Parents proved this with Ottawa city council. In 2019, the money set aside for helping transition to clean energy was up for grabs. The Ottawa For Our Kids group wrote letters, phoned people and protested. They told councillors to protect their children. And they got results. Council recommitted to spend the funds to help Ottawa go green.

What is your advice to young people or those not yet involved?

Politicians would rather please young people than annoy them. Speak up together and they will listen.

The majority of us know climate is a serious issue. My goal is that my babies can breathe outside without lung damage. If we do nothing, we are much less likely to protect them, and action feels better. It’s pretty basic. If we work together, we feel better, and we make a difference.

‘Love, not fear, had motivated me’ to preserve the environment: Leah Davidson

'He says protecting the world

'He says protecting the world from the devastating effects of climate change is up to parents and grandparents: “It's as simple as that.”'

With respect, it's not that simple.

This kind of language erases those of us who have decided that "protecting the world from the devastating effects of climate change" means that the most appropriate choice is not to have children.

To follow your advocacy to its logical outcome, either the human race ensures its early demise through failure to reproduce, or else the only people having children and raising them in their own mode of thinking would be those who were unconcerned about the effects of their own lifestyle on climate change and ecosystem collapse.
Perhaps you should rethink that.

This concern assumes that

This concern assumes that parental influence is transmitted with complete efficiency, and results in offspring being little ideological clones.

I've seen enough exceptions to that pattern to persuade me that it was worthwhile to do a mid-life career change into education. It has been a good use of my time, as well as frequently being quite enjoyable, to make use of the many opportunities this presents to encourage independent, critical thinking by young people.

You don't have to be a breeder to be a nurturer.

From the 2014 IPCC Summary Report for policymakers: "Globally, economic and population growth continue to be the most important drivers of increases in CO2 emissions from fossil fuel combustion. The contribution of population growth between 2000 and 2010 remained roughly identical to the previous three decades, while the contribution of economic growth has risen sharply." Having children is making climate change worse. Stop doing it.