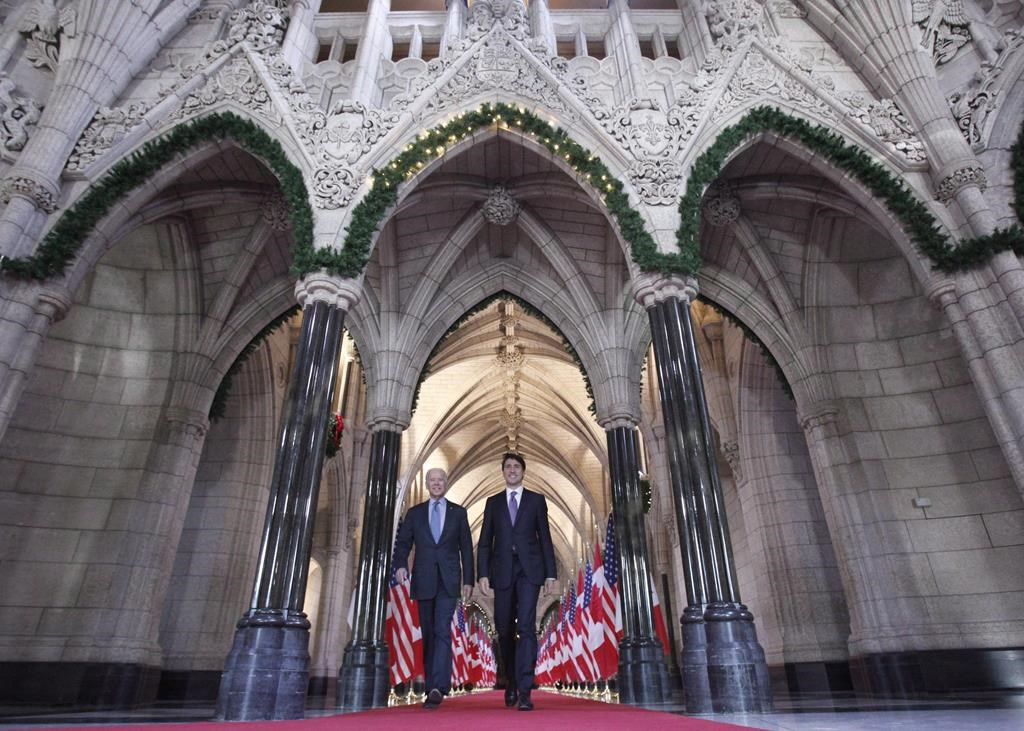 Prime Minister Justin Trudeau and then-vice-president Joe Biden walk down the Hall of Honour on Parliament Hill in Ottawa on Dec. 9, 2016. File photo by The Canadian Press/Patrick Doyle
Previous story
Next story

Joe Biden's to-do list just got a whole lot longer — and it's a safe bet it now includes patching the holes in Canada's relationship with the United States.

Biden has more pressing priorities to address first, such as the pandemic, which was top of mind Monday for the president-elect as he set about changing American attitudes toward COVID-19.

"Please, I implore you: wear a mask," he pleaded on a day when the number of infections in the U.S. to date crossed the 10-million threshold.

"We can save tens of thousands of American lives if everyone would just wear a mask for the next few months. Not Democrat or Republican lives, American lives."

There could be a role for Canada in Biden's strategy, given his focus on following the science and providing Americans with clear, factual guidance on how best to tackle the challenge, said Kirsten Hillman, Canada's ambassador to the U.S.

"We've been doing that since the outset," Hillman said in an interview.

"Having some discussions, if they'd like to, with some of our experts, and some members of our COVID task force — how we did that, what we learned, what we would do differently if we were to do it again — I think there's a lot of room there for partnership and co-operation, and we've already expressed that to the Biden team."

Former Manitoba premier Gary Doer was Canada's ambassador the last time the Democrats were in the White House, one of whom was Biden himself as Barack Obama's vice-president. Another was Ron Klain, a former chief of staff to Biden who was tapped by Obama to lead the administration's defence against the Ebola outbreak in 2014.

Klain, who helped draw up Biden's strategy for the current crisis, is likely to be front and centre in helping to implement it as well, Doer said.

"We had a very co-ordinated approach to contain Ebola in North America … to contain it on both sides of the border and then prevent it, to deal with it in countries where it was originating," he said.

As if on cue, Prime Minister Justin Trudeau spoke to the president-elect Monday and predicted a close working relationship.

"We've worked with each other before," Trudeau tweeted. "We're ready to pick up on that work and tackle the challenges and opportunities facing our two countries — including climate change and COVID-19."

I just spoke with @JoeBiden, and congratulated him again on his election. We’ve worked with each other before, and we’re ready to pick up on that work and tackle the challenges and opportunities facing our two countries - including climate change and COVID-19. pic.twitter.com/wldIwLSz5H

Climate is an area where the federal Liberal government is more closely aligned with the incoming Biden administration than it ever was with Donald Trump.

But, as ever, Canada's dependence on its energy sector, and the political challenges it has long presented for Trudeau, could complicate matters — especially in the hair-trigger atmosphere of a minority government on Parliament Hill.

Canada continues to champion the cross-border Keystone XL pipeline expansion, which would move more than 800,000 additional barrels of diluted bitumen from the Alberta oilsands to refineries on the U.S. Gulf Coast.

The Obama administration slow-walked and then ultimately vetoed the project in 2015, only to see Trump turn around and repeatedly sign executive orders in an effort to resurrect it. The U.S. Supreme Court slammed the brakes on again in July.

During the campaign, Biden was unequivocal: he would not allow the expansion to proceed. Canada has not yet taken no for an answer.

"We try to make sure that American stakeholders and lawmakers at all levels, including Democrats on (Capitol) Hill … understand that that project is something that is going to strengthen U.S. energy security, and it's going to do so safely and responsibly," Hillman said.

"Canada's one of the only major suppliers to the U.S. that has a price on carbon, that has a goal to achieve net zero emissions by 2050 … Talking about our KXL project, in particular, is part of a conversation around how energy trade with Canada is important for both countries, even if we are transitioning to a lower carbon economy."

The president-elect also has a suite of protectionist "Buy American" policies ready to kick-start the U.S. economic recovery and placate some of those working-class voters who supported Trump in 2016 and 2020.

As vice-president, Biden presided over the implementation of the 2009 Recovery Act, an $800-billion stimulus package enacted in the midst of the Great Recession that restricted the use of foreign materials and international bids on U.S. infrastructure projects — rules from which it took Canada nearly a year to negotiate a waiver.

His new "Made in America" office would have the power to review all Buy American waivers and establish a public record of any and all of them.

The political climate in 2009 was very different than it is in 2020, said Doer, who expects Canada to be able to negotiate waivers to the rules much as it did 10 years ago.

Those waivers, he noted, were supported by major labour unions with members working on both sides of the Canada-U. S. border.

"All those people … were very instrumental to Biden's win in the Great Lakes states — Pennsylvania and Michigan and Wisconsin and Minnesota," Doer said.

"So I think that we'll have to use that kind of template to try to have not a Buy American position but a Buy North American view in our neighbourhood."