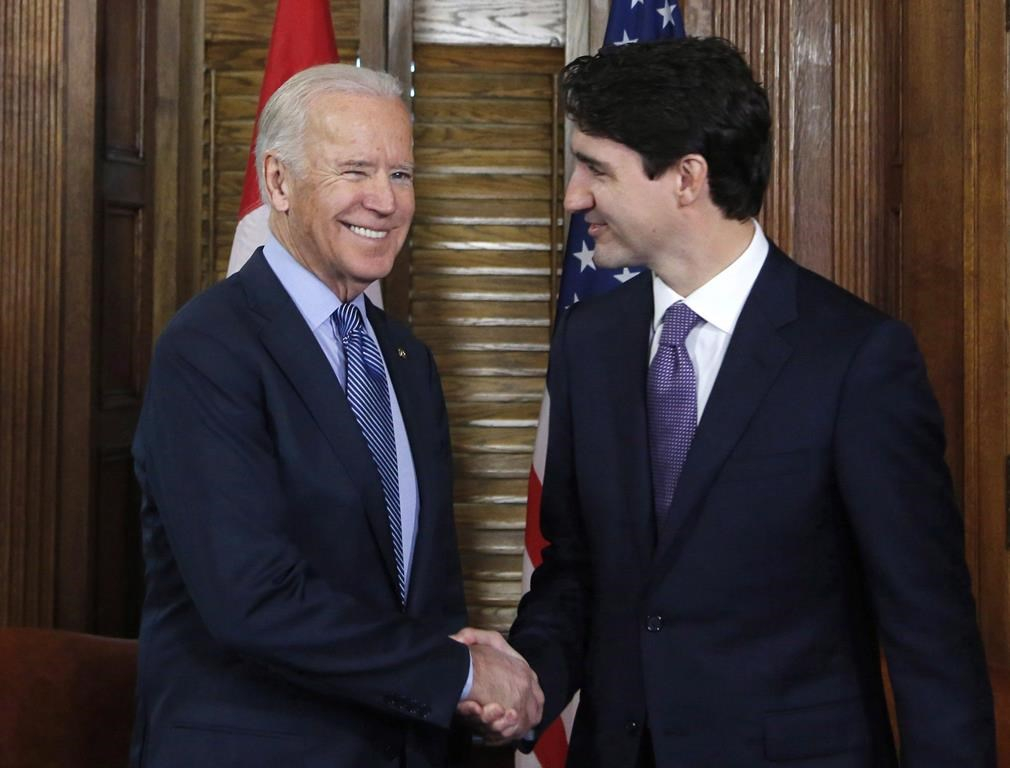 Prime Minister Justin Trudeau is the first international leader to have personally congratulated Joe Biden on being elected U.S. president, his office said Monday as it summarized a conversation about areas of co-operation — and potential contention.

I just spoke with @JoeBiden, and congratulated him again on his election. We’ve worked with each other before, and we’re ready to pick up on that work and tackle the challenges and opportunities facing our two countries - including climate change and COVID-19. pic.twitter.com/wldIwLSz5H

The telephone call took place even as Donald Trump refused to concede, making unfounded allegations of electoral fraud. Trudeau had already issued a statement congratulating Biden, who will be sworn in as president at an inauguration ceremony Jan. 20, soon after media outlets declared him the winner Saturday.

The prime minister and Biden discussed a variety of topics, including COVID-19, climate change, the need to fight anti-Black racism and China's detention of two Canadians, Michael Kovrig and Michael Spavor, according to a statement released by the Prime Minister's Office after the call.

The statement also says Trudeau raised several issues that have challenged the Canada-U. S. relationship, including the softwood lumber dispute, U.S. protectionism and the Keystone XL pipeline, which Biden has suggested he wants cancelled.

Biden's transition team released its own statement acknowledging the call — a typically routine government exercise that had become a rarity under Trump.

Biden, it said, is looking forward to "working closely" with Trudeau on ways to "advance global health security and resilience against future biological threats; revitalize bilateral economic ties as well as the broader North American partnership, and to deepen collaboration with Canada to address a range of regional and global challenges."

Earlier Monday, Trudeau stressed Ottawa would stand up for Canadian jobs and interests if the new administration sought to erect barriers to trade between the two countries.

During a news conference announcing federal funds to expand high-speed internet across Canada, the prime minister sidestepped questions about Trump's allegations of electoral fraud. Trudeau said he has "confidence in the American electoral process as it has unfolded."

When asked what message he would send to Trump, Trudeau said his message is the same for every American president: "I will work to defend Canadian interests. That's my job."

The election of Biden is a breath of fresh air for the Trudeau government after four tumultuous years dealing with the mercurial Trump, who personally attacked the prime minister on several occasions as his administration imposed punitive tariffs on Canadian steel, aluminum and other goods.

Yet Biden has talked about limiting foreign products in his plan to invest hundreds of billions of dollars into the U.S. economy over the next four years as part of what he has described as a Build Back Better strategy. That could have a big impact on Canadian jobs and interests.

Canadian Manufacturers and Exporters, which represents more than 2,500 companies across the country, is one of those that have expressed concern about Biden's plans — and called on Ottawa to redouble its efforts to keep trade flowing.

"Traditionally, Democrats have been more protectionist in their outlook," CME president Dennis Darby said in a statement. "Mr. Biden campaigned promising to strengthen the Buy American Acts and Buy America, and these policies may force Canadian companies to invest in or relocate to the United States."

The CME urged the Liberal government to continue lobbying U.S. senators and state governments to prevent an rise in protectionism, as well as changing Canada's tax regime to help business.

Asked about a rise in U.S. protectionism under Biden, Trudeau said Canada has developed a great deal of experience in pushing back against the Trump administration's tariffs as well as the negotiation of a new North American free trade agreement.

"The fundamental argument that we made every step of the way over the past four years — and we'll continue to make into the future — is the fact that creating or imposing barriers on trade between Canada and the U.S. not only hurts Canada, but also hurts workers and companies in the United States," Trudeau added.

Scotty Greenwood, a former American diplomat in Canada who now heads the Canadian-American Business Council in Washington, D.C., says it is important that Canada not become complacent on trade, with the Biden administration taking over after four years of Trump.

"There will be work to be done to make sure that the administration is reminded of the specifics of how integrated we are," Greenwood said. "But it's not going to be the kind of lift it was for the last four years."

Specifically referring to some of the punitive tariffs and other unilateral trade actions taken against Canada by Trump over the past four years, Greenwood said: "You won't see those kinds of tariffs and those kind of threats being levied against Canada or our other allies in a Biden-Harris administration."

Colin Robertson, a former Canadian diplomat to the U.S. and vice-president of the Canadian Global Affairs Institute, noted that Canada had to fight a decade ago when the Obama administration implemented restrictions on foreign goods in its own stimulus spending following the financial crash.

The Trudeau government should mimic what Stephen Harper's Conservatives did back then, Robertson said, which included enlisting premiers to liaise with U.S. governors and negotiating a reciprocity agreement on procurement.

"It strikes me that Biden will want environmental and labour safeguards and this will be congruent with our own approach," he added. "It means we should approach this bilaterally and aim for a Canada-U. S. agreement like in 2010 rather than trilateral (with) Mexico."

The prime minister also said he will keep working with the Trump administration until Biden takes over on Jan. 20, including on efforts to get Kovrig and Spavor released from Chinese detention.

Trudeau also went out of his way to congratulate Biden's running mate Kamala Harris, who is to become vice-president. He said seeing a Black and South Asian American woman elected to the vice-presidency was inspiring, and a reminder that everyone has a place in the corridors of power.