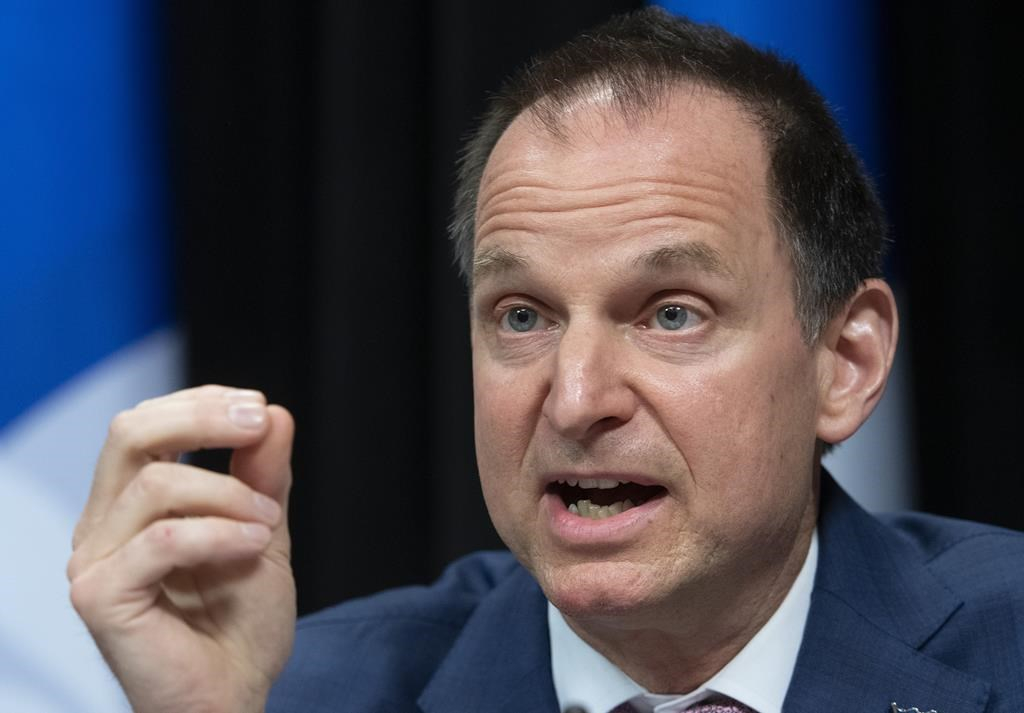 For the first time since 2014, the Quebec government expects to run a budget deficit.

Pandemic-related spending has pushed the province’s deficit to $15 billion for this fiscal year, Finance Minister Eric Girard said Thursday, as he unveiled Quebec's second economic update since the 2020-2021 budget was tabled in March.

At that point, Quebec was predicting a balanced budget and 2 per cent growth. Instead, Girard's update predicts $30 billion in deficit spending over three years to manage the effects of the pandemic. He projected a $8.3-billion deficit for fiscal 2021-2022 and $7 billion the following year.

In June, Girard predicted Quebec would balance the books by 2025-2026. On Thursday, he described that projection as a "hope." Balancing the budget in five years will depend on several factors, he said, including more money from Ottawa for health care.

"We’re in the midst of the second wave," Girard said. "There is a lot of uncertainty."

He said he expects Quebec's gross domestic product to decrease by 6 per cent in 2020-2021, slightly less than the 6.5 per cent decline he predicted in June. He projects 5 per cent GDP growth next year. "We think that's pretty solid as a forecast."

Girard said the government plans to spend an extra $1.8 billion over the next three years on measures to stimulate the post-pandemic economy. "There's no doubt that the next six months will be difficult," he said.

If that's not enough, he said, the government is prepared to spend more. "It's very important to recuperate the growth that was lost."

The Official Opposition said the government needs to be doing more to help businesses. "We're not talking about helping companies survive," Liberal Leader Dominique Anglade told reporters. "The reality is that there are needs today."

Without more support, she said, businesses won't survive, putting the government's projections around economic growth -- which the Liberals described as overly optimistic -- into question. "You can say any big number you want, when you look at the detail, you realize there's nothing," Anglade said.

For the first time since 2014, the Quebec government expects to run a budget deficit. #Quebecpoli #Covid19 #pandemic #deficit #cdnpoli

Among the factors that pushed the surplus down was a re-evaluation of the government's losses on the Bombardier C Series plane, now known as the Airbus A220. The government lost $434 million more than it believed it would, bringing its total losses on that deal to over $1 billion.

It also lost $378 million on investments in Ciment McInnis -- a cement plant in the Gaspe region that has ties to Bombardier's owners.

By maintaining a focus on returning to a balanced budget within five years and putting more than $2 billion into the debt-repayment fund, the government is preparing Quebec for "years of austerity," Jacques Letourneau, the federation's president, said in a statement.

The update was more positively received by the business community.

Michel Leblanc, president and CEO of the Chamber of Commerce of Metropolitan Montreal, described the update as "very reassuring." He said he thinks the province's growth forecast is realistic and that the economy may grow even faster after the pandemic, due to "constrained demand."

Francois Vincent, the vice-president for Quebec of the Canadian Federation of Independent Business, said he was pleased with the funding for retraining programs but he said he'd like to have seen more support for small businesses.

The average small or medium-sized business in Quebec has debts of more than $130,000 as a result of COVID-19, Vincent said.

The projected deficit for this year includes a required payment of $2.7 billion the province will make to a fund dedicated to reducing the province's debt, which stands at roughly $220 billion. The update says the province will empty its $12-billion debt-stabilization reserve to absorb the majority of this fiscal year's deficit.

-- With files from Jocelyne Richer in Quebec City.

Hitting the reset button on the economy post-pandemic

By Ryan Merkley | Opinion | May 6th 2020
Coronavirus in Canada