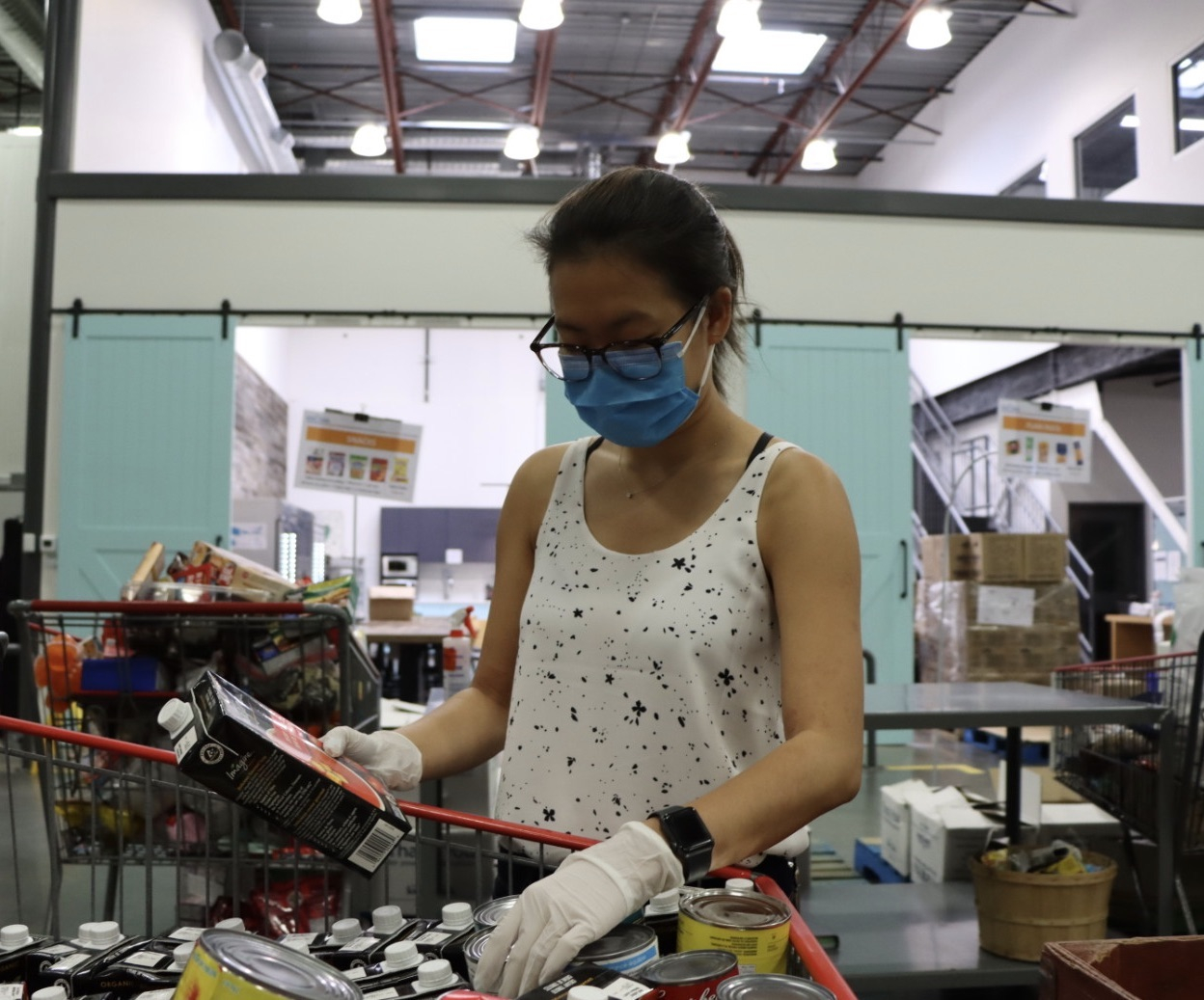 Demand for food charities and food banks is surging. But researchers say that should trigger discussions about why people aren't earning enough to eat in the first place. Photo by Marc Fawcett-Atkinson
Previous story
Next story

“Even before the pandemic, when we look at the data, food charities would, at most, have seen one-sixth of the people who were struggling — and we have no evidence to suggest that the help people get from those (organizations) is sufficient to meet their needs,” said Tarasuk, a professor of nutritional sciences at the University of Toronto and the principal investigator for PROOF, an interdisciplinary research team investigating effective policy approaches to reduce food insecurity in Canada.

In June, Statistics Canada reported that 14.6 per cent of Canadians (about 5.1 million people, or twice the population of Vancouver) had lacked food at least once in the previous month, a four per cent increase compared to 2018. And while that number is expected to surge as the pandemic drags on, hunger — a symptom of poverty, not a lack of food — has been on the rise for decades in Canada.

It’s a social ill driven not only by decades of harmful policy choices, say Tarasuk and other researchers, but also by the stories Canadian media tells about why millions go hungry — and how Canadians with means should help.

“Canadians are worried knowing that, with this pandemic, so many people have lost work, the prices of basic essentials are going up. Many of us are concerned about other people who are less well off, and that’s going to be portrayed (in media),” she said.

“But with all this (media) focus on the public donating — as if it’s the public’s problem to fix this — where’s the conversation about federal responsibility to ensure that people have adequate income to meet basic needs?”

An adequate income that’s out of reach for many, even if they are working.

Wages are the main source of income for about 65 per cent of food-insecure households, according to 2018 data from Statistics Canada. Low-wage jobs and precarious work situations — including many roles that have proved to be essential during the pandemic, like grocery store workers, care-home attendants and delivery drivers — are to blame, Tarasuk said.

The annual income for someone working full time at the minimum hourly wage (from $12.15 in Newfoundland and Labrador to $16 in Nunavut) is, on average, $27,600.

Nor is the burden evenly distributed. A 2019 report by the Canadian Centre for Policy Alternatives found those in Canada who are Black, Indigenous or people of colour (BIPOC) earned significantly less than their white counterparts, despite being slightly more active in the workforce.

“With all this (media) focus on the public donating, where’s the conversation about federal responsibility to ensure that people have adequate income to meet basic needs?” asks Valerie Tarasuk of @proofcanada.

In 2015, white men earned on average $12,423 more each year than BIPOC men, while white women earned $4,943 more than BIPOC women, the report found. Women of all racial backgrounds earned, on average, well over $10,000 less than their male counterparts.

Those income numbers are reflected in rates of food insecurity, with almost three times as many Black and Indigenous households being food insecure compared to white households.

“We’ve seen for years now the increasing presence of those kinds of employment, so about two-thirds of households that were food insecure pre-pandemic were in the workforce but unable to manage because the amount of money they were getting for their work was insufficient to meet their needs,” Tarasuk explained.

People on social assistance are at an even higher risk, she said. More than 60 per cent of people on welfare can’t afford enough food and other basic living costs.

“When people compare social assistance benefit levels to the cost of food and shelter, typically, they find them wanting,” she said.

For instance in B.C., a single person who could work received a welfare income of about $9,500 last year, while someone with disabilities received $15,200, according to Maytree, an anti-poverty advocacy organization.

According to Dalhousie University’s Agri-Food Analytics Lab, the estimated annual cost of food alone for a single person in 2020 was roughly $3,350 based on pre-pandemic data.

But these numbers are rarely part of the stories Canadians — and Canadian media — tell about hunger.

“If you think about the messaging around food (charities), it’s doing a couple of things,” Tarasuk said.

That story misses the fact that if someone can’t afford food, they’re likely also struggling to meet other basic expenses, like rent or mortgages, utility bills or prescription medications, she said.

However, the problematic impacts of this hunger-focused story go beyond omission and limit the range of acceptable — and politically feasible — solutions, explained Elaine Power, professor of food and gender studies at Queen’s University.

Among the solutions that aren’t considered politically feasible is the implementation of adequate social supports. Those could include a universal basic income, she said — and that would mean increasing taxes, particularly for corporations and the wealthiest Canadians, to fund the system.

There is precedent in Canada for an income-based approach to poverty and hunger reduction. In fact, the first food bank in Canada wasn’t established until 1981, in Edmonton. The country was in recession at the time, driving a surge of poverty, and the organization was created as a temporary emergency measure modelled off food banks in the United States.

But when the economy picked up again, the social services that had helped alleviate poverty in Canada created after the Depression and the Second World War were never restored or adequately replaced. Instead, food banks and charities were left to fill in the cracks in Canadian society by keeping people fed, Power said.

At the heart of the U.S. food charity model, now widespread in Canada, is a tight relationship between food producers — who, by design, produce more than they can sell — and the charities tasked with feeding hungry people, she said. It is literal, because many food charities rely on donations of cash and excess food, but the relationship also shaped the range of morally acceptable responses to both hunger and food waste.

About 86 per cent of food waste in Canada is generated in the supply chain before it reaches consumers, according to a 2019 report by Second Harvest, a non-profit organization that recuperates food that would otherwise be wasted and distributes it to charities.

The organization estimates that Canadian food waste generates 56.5 million tonnes of CO2 annually, or roughly a year’s worth of emissions for 12 million cars.

“(Donating food to charities) is so simple, so immediate, it feels morally good,” said Power, and not just because the donation will help alleviate hunger. “It’s also morally good in the sense of not wasting food, and now we have this … other green moral imperative.”

This approach is widespread in federal and provincial responses to hunger. For instance, since April, the federal government has announced $250 million in grants to help food charities purchase and distribute food, redirect food that would have otherwise been wasted to food charities and hire temporary help to replace volunteers.

“The federal government is making it public policy to give money to support food charity as a response to this very, very serious problem. And that’s ridiculous,” said Tarasuk, the principal researcher at PROOF.

And while this charity-based approach is necessary to meet Canadians’ immediate needs for food, Power said that it needs to remain an emergency measure.

“(Food charities) serve too many purposes. They allow food companies to get rid of surpluses or things that couldn’t sell and be good corporate citizens. They allow workplaces to use volunteering as a kind of team-building. Even my kids, starting in junior kindergarten, they learn that this is how you be a good person — you bring food to the food bank,” she said.

Food charities shouldn’t be normal or institutionalized — advocating for adequate wages and income supports and demanding that large food producers, processors and grocers stop wasting 8.8 million tonnes of food annually should, she said.

Tarasuk agreed, saying it is not the public’s responsibility to alleviate hunger. It’s the government’s — and donating millions to charities isn’t enough, she added.