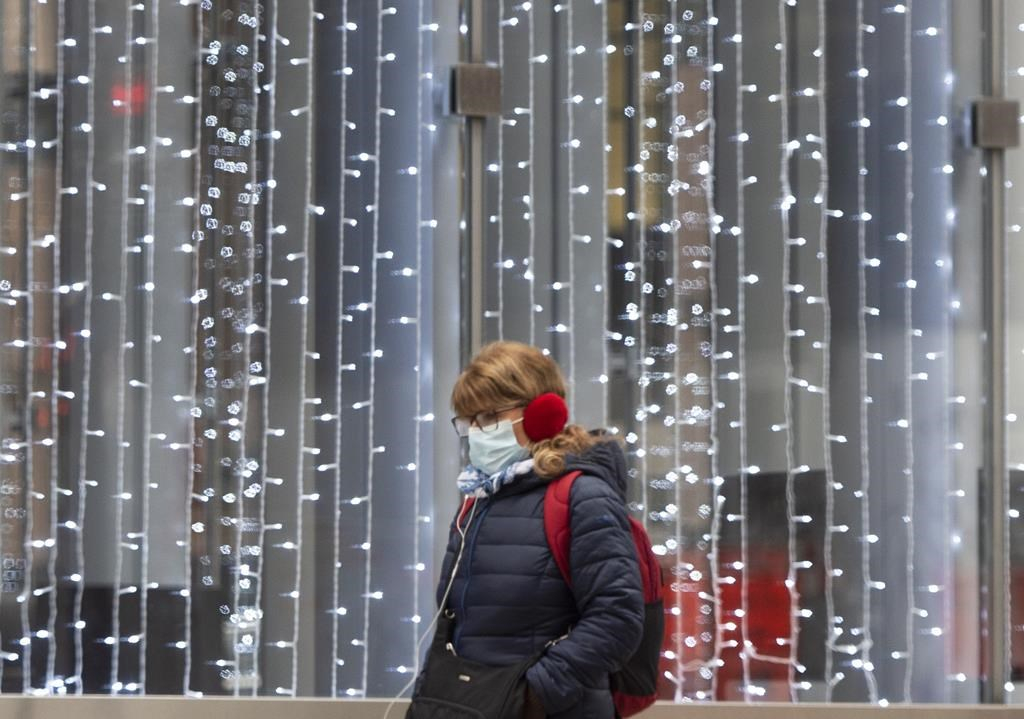 A woman walks past a display of festive lights in Montreal, on Tuesday, Dec. 8, 2020. File photo by The Canadian Press/Ryan Remiorz
Previous story

Canada's initial rollout of the COVID-19 vaccine came into clearer focus Thursday as Ontario announced it would go ahead with its first immunizations on Tuesday, while high case counts continued to strain the health-care systems in several parts of the country.

Ontario Premier Doug Ford said the province will begin administering the shots in hospitals in Toronto and Ottawa, with health-care workers in long-term care and other high-risk setting first in line for immunization. Ontario has made sure all the necessary security measures are in place to receive the doses from Pfizer, he said.

Retired Gen. Rick Hillier, who is leading the province's vaccine program, said 6,000 doses would arrive Monday and be split evenly between the Toronto and Ottawa hospitals. A total of 90,000 doses of the Pfizer vaccine are expected to arrive in Ontario over the course of the month, to be rolled out to 13 hospitals, he said.

Ontario also expects to receive between 35,000 and 85,000 doses of the COVID-19 vaccine made by Moderna this month, assuming it is approved for use in Canada, he said.

Health Canada approved the COVID-19 vaccine developed by Pfizer on Wednesday. Federal officials have not given a timeline for the possible approval or distribution of the Moderna shot.

Hillier urged residents to be patient as they wait for their turn to be immunized.

"We will do it, but it is going to be slow, there will be bumps in the road," he said.

"And in the meantime while we're rolling out the vaccination program, don't forget the health measures that are absolutely crucial," he added.

Alberta has also announced it will start distributing the vaccine next week to front-line health workers and caregivers, with the first round set to be administered Wednesday.

The province has said its first 3,900 doses will go to intensive care unit doctors and nurses, respiratory therapists and long-term care workers. Hospitals in Edmonton and Calgary will be the initial vaccination sites.

Quebec also unveiled its initial plans for immunization earlier this week, saying shots would begin to be administered at two long-term care homes as early as Monday, the day they are expected to arrive.

Health Minister Christian Dube has said some of the province's 20 vaccine distribution sites are located in long-term care homes, which would allow immunizations to begin at those sites even though Pfizer has asked Canadian governments not to move the shipments until it's confirmed they can be properly stored and handled.

Meanwhile, the two provinces hardest hit by the pandemic continued to see high numbers of new infections Thursday, as each faced reports examining aspects of their response to the crisis.

Quebec, which reported 1,842 new COVID-19 cases and 33 new deaths linked to the novel coronavirus, faced scrutiny Thursday for how its long-term care system handled the first wave of the pandemic.

An ombudswoman's report said Quebec's long-term care system failed to ensure the safety and dignity of residents as the virus first spread last winter and spring.

In the report, Marie Rinfret said the system was disorganized and unprepared for the surge, with many homes lacking in personal protective equipment and some unable to provide basic care and services.

Ontario reported a record high of 1,983 new cases of the novel coronavirus, and 35 new deaths. It said 515 of those cases are in Peel Region and 496 in Toronto - two hot spots that were placed under lockdown two weeks ago.

The provincial government released new data that showed the lockdowns have not been as effective at containing the spread of the virus as the more stringent, provincewide shutdown imposed during the first wave.

Ontario's chief medical officer of health, Dr. David Williams, attributed the discrepancy to the fact that people are ignoring guidelines to stay home except for essential activities.

Health officials also said the virus's reproduction number is fluctuating around one, which means that Ontario is at a "critical juncture" where case rates may change quickly.

The projections released Thursday show increasing pressure on hospitals in the coming weeks as intensive care unit capacity continues to rise above 200 beds, past the threshold at which surgeries and other care may be cancelled.

Further west, Manitoba's chief public health officer renewed his calls for residents to stick to their own household over the holidays as the province reported 292 new COVID-19 cases and 13 new deaths.

Dr. Brent Roussin predicted another spike in cases if his advice is ignored.

Provincial health officer Dr. Bonnie Henry said all but two of those fatalities were seniors in long-term care homes.

The province also surpassed 40,000 cases of the virus since the pandemic started after adding another 723 infections on Thursday.

Newfoundland and Labrador reported one new case of COVID-19, in the town of Harbour Breton, which has been on partial lockdown since two cases were announced there over the weekend.