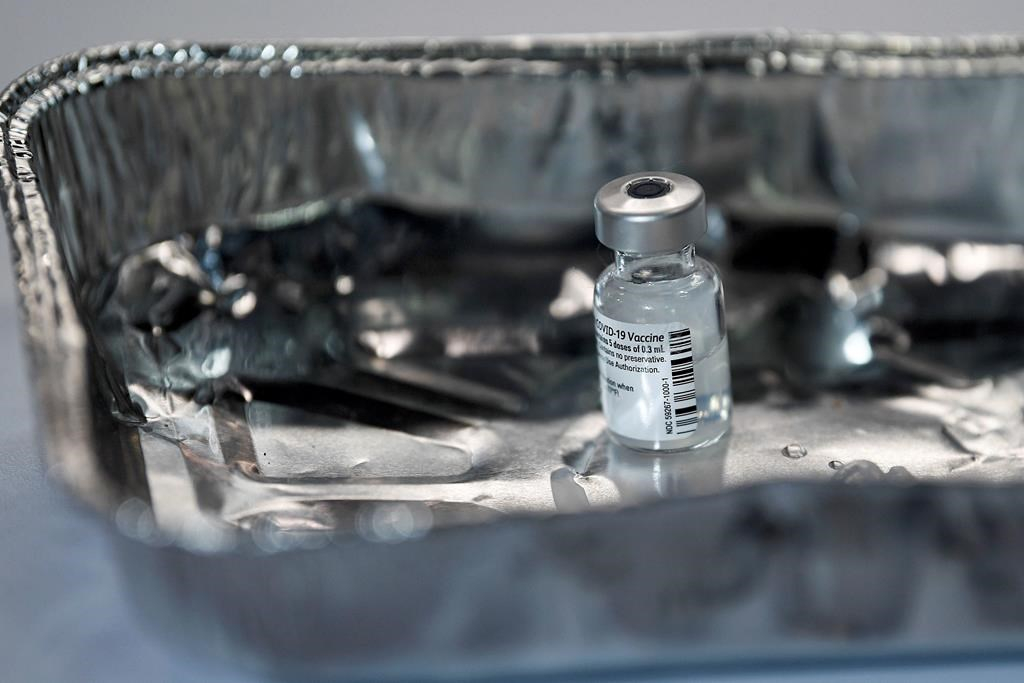 A vial of the Pfizer-BioNTech COVID-19 vaccine at the Louisa Jordan Hospital in Glasgow, Scotland, on Tuesday, Dec. 8, 2020. Photo by The Associated Press/POOL, Jeff J. Mitchell
Previous story
Next story

Health Canada approved the COVID-19 vaccine developed by Pfizer and BioNTech Wednesday, paving the way for vaccinations to begin countrywide as early as next Tuesday.

The department also released its long-awaited detailed vaccination plan, which suggests the wider Canadian population will be able to line up for vaccines starting in April, and that everyone wanting the shot could be vaccinated before the end of 2021.

"This is a momentous occasion," said Dr. Supriya Sharma, the chief medical adviser at Health Canada who oversaw the review process.

Sharma said approving a first vaccine is only one step and there are still many months to go in the pandemic, but in a year where the news has mostly been bad, everyone should take a moment to acknowledge the good news.

"The geek in me is amazed," she said, unable to hold back a big smile.

"No one would have thought even when we looked back at the first discovery of the virus that less than a year later we'd be authorizing and then distributing a vaccine."

Maj.-Gen. Dany Fortin, appointed vice-president of operations at the Public Health Agency of Canada to run the vaccine rollout, said the first doses will be shipped from Pfizer's factory in Puurs, Belgium on Friday, and begin arriving at 14 delivery sites in Canada three days later.

The first shipment will include 30,000 doses, with another 219,000 coming by Dec. 31. They are mostly being distributed to the provinces on a per capita basis, said Dr. Howard Njoo, Canada's deputy chief public health officer.

Fortin said it will be one or two days after the vaccines arrive before the injections start, because the doses arrive frozen and must be thawed and diluted before being administered. The Pfizer vaccine's temperature requirements are the most difficult of any of the proposed vaccines, and Sharma said if the doses are not kept at temperatures between -60 C and -80 C until just before injection, the vaccines may break down and become unusable.

All the doses will be packed in special boxes with thermal and location sensors. If any box warms too much, its doses will be segregated and, Sharma said, likely thrown out.

Fortin said Pfizer has hired UPS to ship the doses to Canada and that the route includes stops in Cologne, Germany and Kentucky before Canada. Once on the ground in Canada there is also some road transportation to get to the final locations.

Health Canada has approved the #COVID19 vaccine from Pfizer and BioNTech, paving the way for vaccinations to begin countrywide next week.

Every province has identified at least one initial delivery site — with two each in Ontario, Quebec, Alberta and British Columbia — mainly hospitals. The initial injections will be done in the same locations. As the provinces grow more comfortable with the process and more doses begin to arrive, the Pfizer vaccine is to be delivered at 205 identified sites.

The temperature requirements mean the first doses won't go to the territories. Nunavut, the Northwest Territories and Yukon will be prioritized to receive the doses of the vaccine being developed by Moderna, which can be kept at temperatures of about -20 C. Moderna's vaccine is being reviewed by Health Canada as well, and a decision is expected later this month or in early January.

National figures compiled Tuesday night by the Public Health Agency of Canada showed there were 5,981 new cases that day from 78,290 completed tests, for a positivity rate of 7.6 per cent. The rate of active cases is 191.46 per 100,000 people. Over the past seven days, there have been a total of 45,567 new cases. The seven-day rolling average of new cases is 6,510.

"As soon as vaccines arrive on Ontario soil, we will be ready to deliver and administer them," he said in a statement.

Quebec has selected two long-term care homes as the first recipients, one in Montreal and one in Quebec City, but in other provinces, the initial doses appear likely to go to health-care workers, because transporting long-term care residents to hospitals is not an easy proposition.

Alberta said it expects to start vaccinating health-care workers in Edmonton and Calgary next Wednesday. About 3,900 doses are to go to intensive care unit doctors and nurses, respiratory therapists and long-term care workers.

Saskatchewan expects to receive 1,950 doses at the Regina General Hospital next week and will start vaccinating staff in the intensive-care and COVID-19 units as well as the emergency room.

Workers in long-term care homes will be the first to get vaccinations when 4,000 doses arrive in B.C. next week.

Premier John Horgan said the announcement that vaccines are available is a sign of optimism and an opportunity to celebrate briefly and then redouble efforts to contain the virus.

"But before we get to that place, as in any race, when you see the finish line you don't stop running, you focus, you dig down deep to find that extra resolve to get to the finish line."

While Sharma and Njoo stressed initial doses are limited and will be prioritized for the most vulnerable, more vaccines should be approved over the winter and the shipments of various vaccines large enough by the spring to expand the vaccination program beyond the initial priority groups.

A proposed timeline provided by Health Canada on Wednesday suggests three million people will be vaccinated by the end of March, another 12 million to 16 million by the end of June, and the rest by sometime in the fall.

All but one vaccine among the seven Canada has procured require two doses per patient. Health Canada has received applications to review four of those seven. Pfizer was the first to be completed, with approval coming at 9 a.m.. Wednesday.

Sharma said Canadians should feel comfortable getting the vaccine when they are eligible to do so, saying the review was done faster than usual but did not compromise any standards.

"Canadians can have confidence in our rigorous review process and that the vaccine was authorized only after a thorough assessment of the evidence demonstrated that it met Health Canada's strict standards for safety, efficacy and quality."

Sharma said while there is never zero risk in taking any kind of pharmaceutical, Health Canada is confident the benefits of the vaccine in protecting people against COVID-19 outweigh any dangers.

Adverse reactions to the vaccine have mainly been pain at the injection site, followed by fatigue and headaches.

Canada is the third country in the world to greenlight the Pfizer/BioNTech vaccine.

The United Kingdom began inoculating people Tuesday after last week becoming the first to approve its use. The kingdom of Bahrain approved it last Friday. The United States could approve it as early as Thursday.

The U.K. warned that two people had severe allergic reactions on the first day of vaccinations, but are recovering. The U.K. is investigating and Health Canada has asked for information on the issue but Sharma said for now it has not changed Canada's approval terms.

Those terms require Pfizer and BioNTech to continue providing Health Canada with data on safety and effectiveness of the vaccine for at least two years, including measurements of any adverse reactions and data on how long the immunity provided lasts.

Pfizer's initial trials concluded the vaccine was effective at preventing COVID-19 in 95 per cent of patients.

The initial authorization is only for use on people over the age of 16. Pfizer's initial trials did not include children under 16.

—With files from Kelly Geraldine Malone in Winnipeg