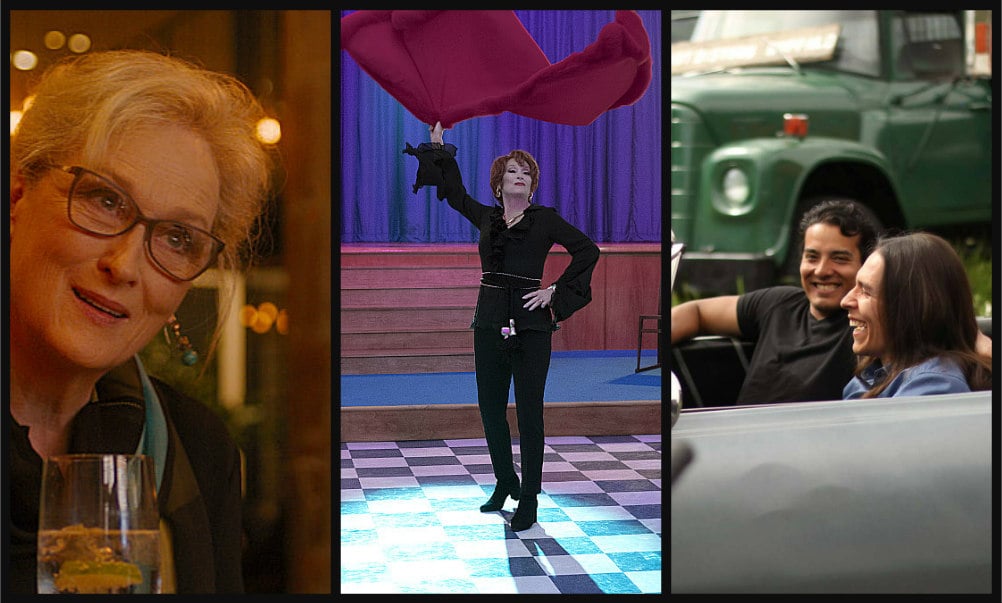 Also, a Black athlete’s troubles and some Vancouver-filmed other realities.
Previous story
Next story

We have more examples this week of big names from the movies turning to streaming services. Meryl Streep has new films on both Netflix and Crave. One is directed by Steven Soderbergh. And Warner Bros. shocked the industry this week by announcing its big films coming up will be shown on HBO Max at the same time they’ll be in theatres — if there are any open. Finding one of those is pretty rare right now. It's quite worrying for real film buffs.

Let Them All Talk: 4 stars

LET THEM ALL TALK: At the start of this pandemic, we all watched a 2011 Steven Soderbergh film called Contagion about a pandemic. Now here’s the latest from him, a bright and witty film about literary matters and reconnecting with old friends and healing old hurts. Its discussions are mature, and the ambience in which they’re delivered is completely natural. That’s because the actors weren’t given lines to speak, only outlines of what each scene was about and what it was to achieve. The rest was improvisation. And what a cast, led by Meryl Streep, Candice Bergen, Dianne Wiest and Lucas Hedges.

Streep is a novelist struggling with a new work but is convinced to travel to England to accept an award. She won’t fly, so her agent (Gemma Chan) arranges a trip on the Queen Mary 2, where during an actual voyage, unbeknownst to the other passengers, the filming took place. Old friends Wiest and Bergen and nephew Hedges are invited along, too, and during the crossing they gather or split off in various groups to talk. And that they do smartly. One thinks she was the model for an earlier novel and resents it. The agent asks the nephew to find out what the writer’s new work is all about because she has not been open about it. There’s also a bestselling mystery writer aboard and a friendly enough older man hovering around. All the literary talk, therefore, gets an engrossing subplot, like a book discussed at one point: “Plot-driven, but like a jigsaw puzzle.” The film is casual in tone for the most part, and overall a good trip. (streaming on Crave) 4 out of 5

THE PROM: Here’s a bubbly, exuberant musical that you can take in to help lighten this dreary year. It’s funny, full of big stars singing and dancing (Meryl Streep hasn’t done as much of it since Mamma Mia!) and carries a message of inclusion to boot. I wish it was more successful (it’s too long, scattered in its story and more than a bit erratic), but you can’t have everything. As light entertainment, it works just fine.

Streep and James Corden play Broadway performers who, when their latest show bombs, take up a cause to restore their image: “We’re going to be celebrity activists.” Along with Nicole Kidman as a chorus girl and Andrew Rannells as an out-of-work actor, they head to Indiana, where a high school girl has been told she can’t go to the prom with her girlfriend as her date. “We’re going to help that little lesbian whether she likes it or not.” They barge into a school meeting (“We are liberals from Broadway”) and pit their narcissism against small-town intolerance in lively dialogue and song.

It was originally a Broadway show, for about nine months 22 years ago. Now it plays on the split between red and blue states, cities and small towns. The director, Ryan Murphy, is an Indiana native himself and the creator of hit TV series like Glee. Like that show, it’s not subtle. It’s brassy and colourful, with more stars (Kerry Washington, Keegan-Michael Key, Tracey Ullman, plus some up-and-comers) and Streep having a great time as an over-the-top diva. Corden has angered some with his impression of a gay man, but I didn’t see a lot wrong with it. It’s just a bit shaky, that’s all. (Netflix) 3 out of 5

TWO MORE FROM THE WHISTLER FILM FESTIVAL: All streaming this year, and therefore available anywhere in B.C. Check out what, how and when here. Once they premiere, the films will be available right to the end of the month.

INDIAN ROAD TRIP: If you’ve been watching the Trickster series about supernatural matters among Indigenous communities in B.C., you’ll probably also enjoy this film. It’s got some of the same ambience and a great deal of reality in depicting life on reserves, this one anyway. It’s imaged by writer-director Allan W. Hopkins, who grew up on one near Lillooet, and, therefore, I expect his representation is accurate. One of his characters complains it’s stifling there; everybody knows everything about you. The rez is “like one big brain. It’s impossible to have private thoughts,” he says.

So, Hank (Ajuawak Kapashesit) and Cody (Paul C. Grenier) are anxious to get out. They plan a trip south to Vancouver, where they imagine eyeing and frolicking with the nudes on Wreck Beach. But first they have to drive a cranky elder (Dale Hunter) to the old reserve from where she was moved years earlier. She wants to make up with her sister, who had refused to move and now may be dying. So the road trip is one long drive across the reserve. They encounter several roadblocks on the way, one by tribal police, another by women, all somehow trying to halt their journey. They’re also being pursued by two guys in a car trying to recover some money they’re suspected of having taken. They are called “Indian con artists” at one point. The supernatural is there in the background, but up front, it’s a good adventure based, according to Hopkins, on real happenings from where he lived, and repeatedly shows a contrast between the old life and the new. (WFF, available starting Tuesday) 3½ out of 5

ALL-IN MADONNA: Here’s a film all about identity and how your perceptions of it can be shattered. A teenager (Melanie Rose Wilson) goes through the ordeal when she tries to grow out of her cloistered life. She has been home-schooled and demands to be allowed to go to public school. Her controlling father (Adam Lolacher) doesn’t like it and warns it’ll be difficult. That, she finds, is true. The kids spout rumours that her dad killed someone. One gets into a fight with her. Worse, a man goes missing, and her dad is under suspicion again.

It’s a complex story, but very engrossing, with old information being dredged up and an examination of the ways accusations can be twisted. Arnold Lim, a news videographer in his other life, directed it, first as a short and now full length. He says growing up as a Korean-Canadian kid in a small B.C. town taught him what it is like being an outsider. He put a lot of that feeling into the film, which he shot entirely in areas near Victoria with a cast almost all from southern Vancouver Island. The rainforest milieu is strong in the look and feel of the film. There’s one scene full of emotion and anger that’s not clearly explained, but the rest plays well. And take note of Wilson. Her acting is perfectly natural. (streaming now from WFF) 3 out of 5

SAFETY: Sports movies regularly bring us inspiring stories like this, and though this one is relatively low-key, not big and cheering like some; it’s dramatic and moving. And true. Back in 2006, Ray McElrathbey, a Black kid from Atlanta got a scholarship to attend and play for Clemson, one of the powerhouses of college football. It’s in South Carolina. Ray’s home life was a mess. His dad was a gambler and absent. His mom was an addict and sent to rehab. His 11-year-old brother Fahmar was to be sent to a foster home.

Ray took him instead, housed him secretly in his dorm room and tried to carry on with studies and sports despite several close calls at being found out. We learn you can carry a brother that small in a gym bag and hide him in a laundry bin. When the ploy is discovered, his teammates come to his aid, even the guy who seemed to be your typical white racist. A woman student he has been seeing (Corinne Foxx) writes about him in the campus paper, and he’s famous. And exposed. He has broken several NCAA rules. “It ain’t fair, but it’s reality,” says his coach (James Badge Dale). There are tense, even wrenching, scenes to come before the climax settles it. Director Reginald Hudlin is a longtime teller of Black stories for both movies and TV. He delivers solid feelings in this one. Watch with the family. (Disney+) 3 out of 5

PARALLEL: Sometimes movies come back for obscure reasons. This one played at the film festival here two years ago. I reviewed it then, and judging by the many other write-ups I’ve seen, it played elsewhere. But a company called Vertical Entertainment has now picked it up and is putting it out video on demand. That’s fine because it was filmed here in Vancouver and produced by Bron Studios in Burnaby. The director is Mexican Isaac Ezban, who likes to explore a sort of Twilight Zone-influenced mystery world. It’s a clever tale, but so twisty that I must admit I occasionally had trouble following it.

Four friends move into a house they’ve rented, accidentally find a whole hidden room the size of an attic and a mirror that’s a portal to a parallel world. It has benefits. Inside, there’s lots of time to do what you want. Come back out and you’ve only been away minutes. The four are software developers who don’t have enough time to meet a deadline. Inside the mirror they can. One also finds art ideas that she reproduces and puts in a gallery show. Another finds tech gadgets previously unknown. Good ideas there, but I got lost a few times (not sure who was in or out). Of course, there’s always a price to pay in stories like this. Tension mounts nicely along with a cautionary warning, but it’s not always clear what’s at stake. The cast includes Aml Ameen, Georgia King, Kathleen Quinlan, Alyssa Diaz, Martin Wallström and Mark O’Brien. (available VOD) 2½ out of 5