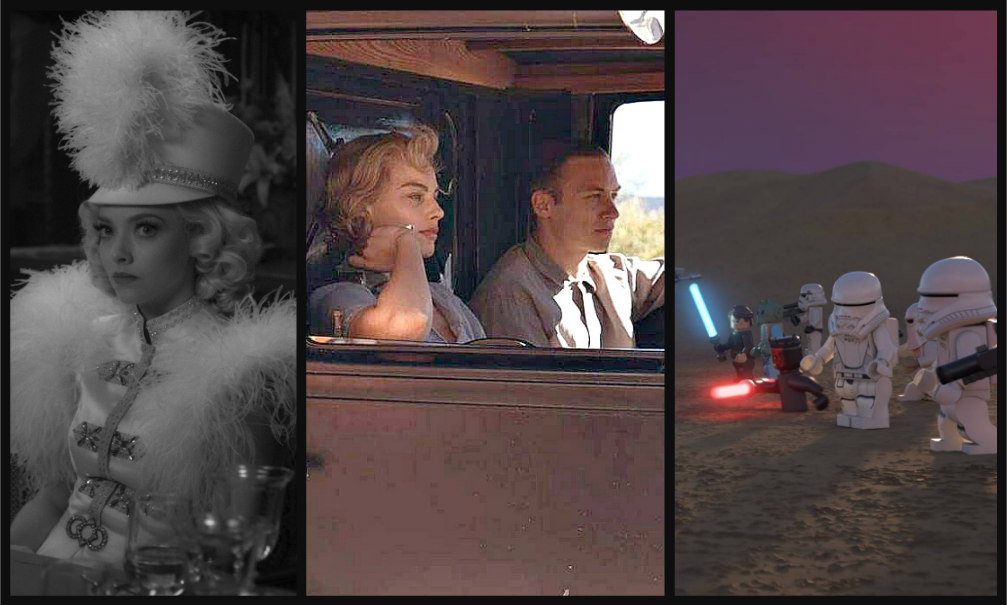 Big films, little gems and something for everyone.
Previous story
Next story

Again, there are signs the pandemic has helped little films get noticed — by keeping the big ones away. Case in point: the Winnipeg-made I Propose We Never See Each Other Again After Tonight. The film had a “$0 marketing budget” but got into theatres in 17 cities, in some for as long as seven, eight or 10 weeks. On Tuesday, it debuts VOD and EST on several platforms, including Shaw, Telus and Cineplex.

Closer to us, there’s an even smaller film, the Yukon-based First We Eat. It has been streaming from viff.org, and still is.

My reviews today include more small films, but I'll start with a big one.

MANK: This one is for movie fans who are fascinated with stories of old Hollywood. Preferably with a cynical view, because you get a great deal of that here. Officially, it recounts Herman J. Mankiewicz's arduous screenwriting of Citizen Kane, the great film for which he and Orson Welles shared an Academy Award. But there’s less of that creative work shown here and more of a look around at the society and characters in Tinseltown of the 1930s. There’s bossy Louis B. Mayer, raised in New Brunswick and head of MGM, powerful newspaper owner William Randolph Hearst, assorted studio folks and a flock of screenwriters churning out popular stories and, among them, Mank himself feeling conflicted about his role. He’s laid up in bed with an injury as he dictates the script, but flashbacks take us around as he discovers what really goes on. He’s like a court jester telling the truth with disdain.

David Fincher directed from a script his late father Jack wrote years ago but couldn’t get made. Not in black and white, he was told. David relishes that. The entire film has the ambience and the look of a top-rank film from the 1930s and often emulates the particular style of Citizen Kane. Film buffs will enjoy that, but the story is compelling, too, and the acting is terrific. Gary Oldman disappears inside Mank; Amanda Seyfried elevates the image of Marion Davies, the Hearst protégé, and everyone in the large cast is believable. Welles is hardly in it. He shows up only a few times. In effect, then, the film takes a position on the long controversy started by Pauline Kael over how much the script was really a joint effort.

It’s short of emotional involvement, though, so crowded is it with incidents and impressions, and Jack Fincher’s research. Still, highly recommended. (It’s on Netflix in a couple of weeks and in three area theatres now — The Park, Park Royal and VanCity — where the documentary The Eyes of Orson Welles is also showing and streaming) 4 out of 5

DREAMLAND: You might have seen the basic story before. A bank robber in the dusty Depression-era U.S. allies with a lonely young man, and together they drive around as outlaws, pulling jobs and shooting back at cops chasing them. Bonnie and Clyde? Sure, a version of them, with Margot Robbie as Allison Wells and Finn Cole as 25-year-old Eugene Evans. He finds her hiding out in his family’s barn, injured with a bullet in her leg (which he removes for her) and a story to tell. No, she did not kill a young girl in her latest robbery. Yes, she steals from banks, but only in retaliation for the foreclosure of her farm.

Eugene’s family farm is under threat, too. There’s a big reward if he brings her in, but her story resonates with him. There’s a more primitive attraction, too, fed with some skinny-dipping and a very sexy shower. So, he agrees to help get her to Mexico, except vehicles are hard to come by for someone as poor as he. It’s a good story; it’ll keep you glued and wondering. Robbie is a good stand-in for a Bonnie type and Miles Joris-Peyrafitte has directed a handsome movie. (On premium video on demand and digital starting Nov. 17) 3½ out of 5

THE LEGO STAR WARS HOLIDAY SPECIAL: There’s great fun here for fans who know the films, and a bit of a curio for others. Lego figures look and act like Star Wars characters from across the whole nine-film universe and maybe beyond. A simple plot device sets that up. Rey searches to better her ability to teach Jedi techniques, sails through a wormhole (and back and forth through others) and sees the entire history of the series. So Luke aviates again through that channel, snow walkers reappear, Yoda pronounces that “All living things the force connects” and yes, the Death Star explodes.

There are X-wing and lightsabre battles, two Darth Vaders at one point, and meta references that the fans will get, like the mocking one, “Who cares about a trade dispute?” There’s also a Jar Jar Binks joke. The animation is speedy and the action gets frenetic. And I spotted two Star Wars veterans among the voice actors (Anthony Daniels and Billy Dee Williams) and also two Canadians. Toronto-born Eric Bauza is Luke and Edmonton-to-L.A. transplant Trevor Devall, who spent years in the voiceover industry in Vancouver, is Emperor Palpatine. He, with his evil cackling, is one of the highlights of this 45-minute romp. An earlier special, 22 years ago, was despised by the fans. Not so, this time. (Streaming at Disney+) 3½ out of 5

THE LAST VERMEER: I had never heard of this story before, but it happened and it’s made a quite involving film. Not often do you see a mystery like this change its solution three times in just a few final minutes. You do here, and how rapt you’ll be. You won’t figure out whether Han van Meegeren, played by Guy Pearce, had been a Nazi collaborator in Holland during the Second World War or an opportunist who was cheating Hermann Goering by selling him a fake painting. Danish actor Claes Bang plays an investigator with the Allied Provisional Government who tries to figure out what he really is.

It takes us through several well-written debates between the two and some long-winded pronouncements about the meaning of art, and then a court case. Han admits to selling a little-known Vermeer painting. He had discovered a number that had never been identified before. Pearce overplays him, effusively expressing his love of art — he paints himself — and his hate for fascism. But how much is true? Bang, meanwhile, is hampered by an interfering justice ministry official and distracted by a dispute with his wife. But director Dan Friedkin keeps the story on track and us guessing. Bang worked with him before, on the film The Square for which he won an acting award as the head of an art museum. He was also in The Burnt Orange Heresy, another recent art world film. (International Village, 5th Avenue and a few suburban theatres) 3 out of 5

SOUND OF METAL: The movies don’t often deal with this affliction — hearing loss — and this one does it most authentically. That may be because the people involved have a connection. The director, Darius Marder, and his co-writer brother Abraham, had a grandmother who went deaf and became an activist. And Derek Cianfrance, who wrote the story and directed a short film of it, was a rock drummer who damaged his hearing. So with innovative sound design, this film accurately duplicates the failing tones, the muffling and distortion heard by the central character, Ruben, and with a sharp script conveys his anguish.

He’s a drummer, too, played by British actor Riz Ahmed, pounding out raging beats behind the screaming vocals of his partner played by Olivia Cooke. As his hearing fades, he gets more and more hyper with worry (he’s also an ex-addict) and looks for a solution. There’s no pill, a pharmacist says, and no cure, a doctor says. The best answer is at a rural school for deaf children. He’s told to adjust, learn sign language and accept silence because “Being deaf is not a handicap. Not something to fix.” He’s impatient and does try a fix: Cochlear implants, which bring on another sequence of distorted and garbled sound he has to get used to. It also frays his relationship with his girlfriend. This film is emotionally potent as it takes us along on his decline and looks for a way out. Both Ahmed and Cooke deliver first-class acting, and look for the French actor Mathieu Amalric in a key role near the end. It’s an American and Belgian film, all in English, but subtitled to better pass on its ideas to deaf people. (International Village and six other theatres around B.C. now and starting Dec. 5 at The Rio) 4 out of 5

18 TO PARTY: A little bit Breakfast Club and a lot like experiences many people have had, here’s an engrossing little film in which not much happens but a lot is talked about. It’s the early ’80s, a punk rock gig is to happen in what looks like a warehouse and people are lined up. Not the younger ones, though. They may get in, a security guard said so, but meanwhile, they have to wait separately at the back of the building. That’s where we meet a wide spectrum of teens. They sit, gossip, complain and even flirt a bit.

A couple of geeks talk technology. A pair of freaks get snarky about Ronald Reagan. One reads a newspaper and considers herself intellectually above the rest. Another listens to music constantly. Two girls recall that their friendship collapsed because one found the other was “a loser.” And the most interesting of them, because he’s not as much of a type, insists he’s doing fine. It’s a facade, though. He’s been off school because he has been shaken by his brother’s suicide. He’ll get a nosebleed later when a big, angry kid among them punches him. Incidents follow incidents. There are rumours about a suicide pact in town and about parents searching for UFOs. It’s interesting to watch and the teens play their parts well, but what does it all amount to? At best, writer-director Jeff Roda has sent us a once-over group portrait. (Streaming at VIFF CONNECT and starting Dec. 1 on a number of video on demand platforms) 3 out of 5