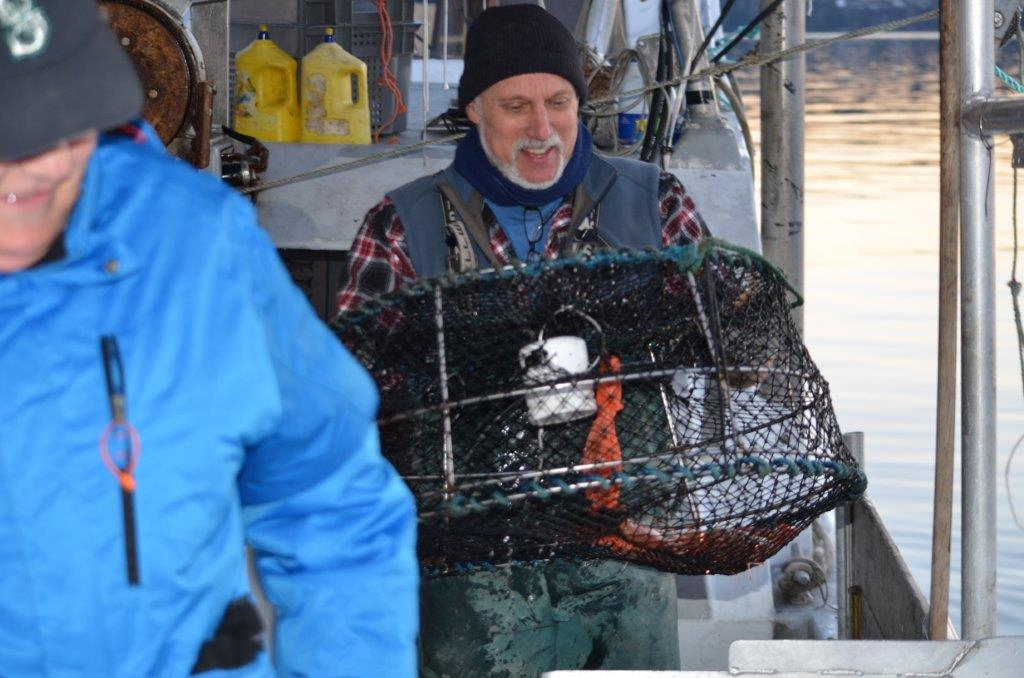 Guy Johnston, a fisher in B.C., with his spot prawn trap. Photo courtesy of Guy Johnston
Previous story
Next story

For the past 40 years, Guy Johnston has worked six-week stints on his fishing boat without a break, harvesting spot prawns on the central coast of British Columbia.

Johnston said he still likes fishing the red crustaceans, found only in West Coast waters, after all these years. He calls the catch “an interesting puzzle,” one he likes to solve by finding the best places to fish and new ways to be sustainable in the industry.

What he likes about spot prawns themselves? “Eating them,” he said, with a laugh. “They’re pretty darn good to eat.”

Spot prawns fit into British Columbia’s top 30 agri-food and seafood commodities — prawns and shrimp are 23rd on the list, nestled between hay/clover and wild sablefish. The province harvests about 2,450 metric tonnes of spot prawns each year, mostly from the Strait of Georgia, which has an estimated 3,000 species of marine life. The reddish-brown catch is important to Indigenous communities on the West Coast, who harvest the prawns for ceremonial, food and commercial use.

Johnston lives in Cowichan Bay and, like many prawn fishers in the area, saw the international demand for his catch decline due to COVID-19. More than 90 per cent of the province’s commercial catch is usually bought up by Japan and the rest of Asia, but around 1.5 million pounds are now stockpiled in freezers due to cancelled large-scale events, such as the Lunar New Year and the Tokyo Olympics.

“The price dropped by over 50 per cent, so you can imagine,” he said. “It was pretty hard to make up for that. And when you look at young fishermen who are heavily in debt, the effects are ... pretty devastating.”

However, along with the disappointment, Johnston also saw hope: Fishers pivoting to sell in local markets. It’s something he has done for many years through his community-supported fishery, which sells directly to local consumers.

“Lots of fishermen just recognize it was economically impossible to sell at those (international) prices, so they really put a lot of effort into selling locally,” he said. “Obviously, people enjoyed that.”

Some years, there aren’t that many spot prawns sold locally, so for B.C. aficionados, this was a nice switch, he added.

When prices for B.C.'s spot prawns tanked thanks to COVID-19, fishers steeled themselves for the fallout. But local buyers have kept the industry afloat, taking a renewed interest in the crustaceans found only in West Coast waters.

Johnston said, in a way, the industry has gone full circle. The industry was smaller before the 1990s, when Asian buyers started to purchase spot prawns in a big way.

“Often, there certainly were times where you came in with a freezer-load of prawns, (and) you’d be sitting at the wharf selling it yourself between trips,” he said.

Emily Orr, lead rep for the Prawn Industry Caucus (PIC), said the local spot prawn craze is emblematic of a growing "buy local" trend, and fishers like Johnston are now realizing the opportunities close to home.

Orr started fishing prawns when she was 19 in the southern Strait of Georgia. Now out of the fishing side of the business for 10 years, she works with the PIC to provide input to the Department of Fisheries and Oceans on industry issues while promoting and protecting commercial fisheries.

Orr said it’s too soon to know the real impact of the last spot prawn season and what it might mean for the future of the industry.

“This past season saw a wide range of prices for live and frozen prawns, typically a lower frozen price (than in) previous years,” she said. “However, price adjustments are still being made, and it’s not clear what the price this year’s (frozen) catch will fetch, so what might be considered an overstock product in cold storage here in Canada now may be exported over the coming months as ... prices stabilize again.”

What Orr does know is that local demand for spot prawns went up this past season.

“Difficulties experienced by supply chains, due to the restrictions related to COVID, have been a catalyst for many harvesters to offer more of their catch for sale domestically, which is a great opportunity for locals to enjoy more prawns at home,” she said.

“And so harvesters who were able to sell into new and existing domestic markets did well this past season and saw an enthusiastic local demand for prawns.”

What you should know about microplastics in shellfish