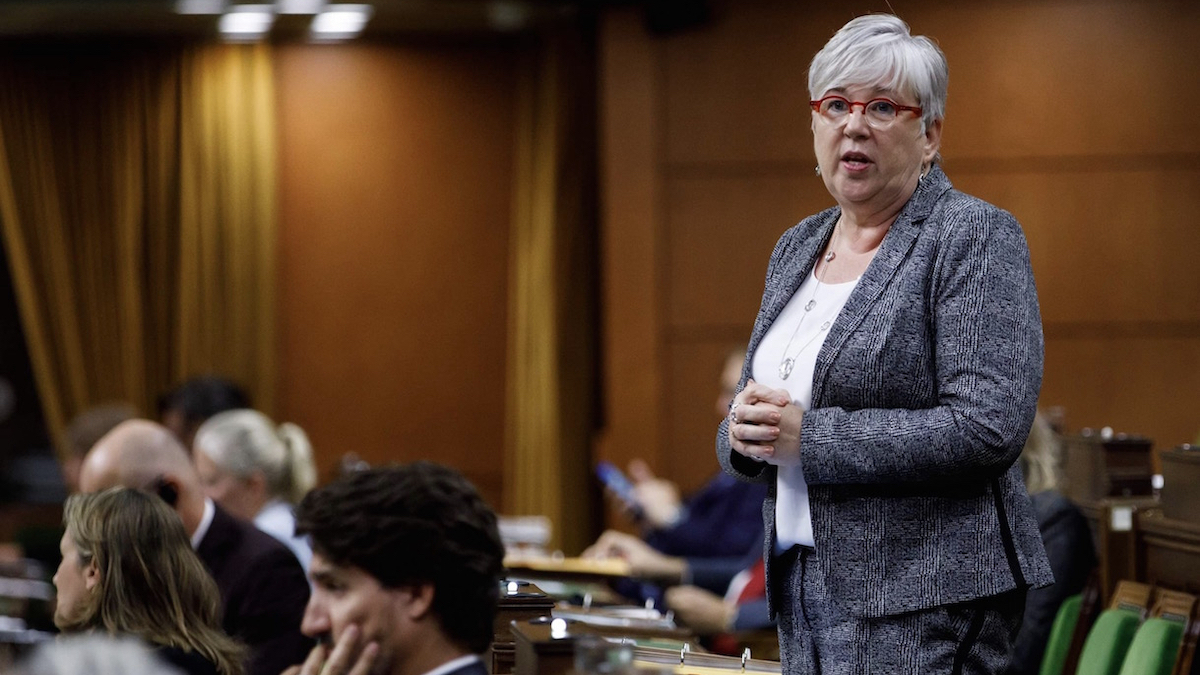 Federal Fisheries Minister Bernadette Jordan announced Thursday she'll be phasing out controversial fish farms in the Discovery Islands on the B.C. coast. Photo courtesy of the Government of Canada
Previous story
Next story

Federal Fisheries Minister Bernadette Jordan announced Thursday that controversial fish farms in the Discovery Islands on the West Coast will be phased out over the next 18 months.

Jordan’s decision follows consultations with seven First Nations whose traditional territories fall within the Discovery Islands and heated public debate around the fate of the fish farms and the harms they might pose to dramatically declining wild salmon stocks.

“This is a very difficult decision, but it reflects the wishes of the seven First Nations in the area because they were very concerned about those farms being located in their territory,” Jordan told Canada’s National Observer.

“This plan means that there will be no new fish of any size transferred to these facilities.”

The 19 salmon farms in the Discovery Islands — nine of which are already empty — will have their licences renewed until the end of June 2022.

Following that date, no new licences in the Discovery Islands will be issued.

The renewal of the current licences is to allow already existing fish on the farms to reach market size, and the majority will be harvested well before the deadline, Jordan said.

“Nobody wants to see three million fish culled. We are looking at a phasing-out approach,” Jordan said. “This is actually going to happen in a relatively quick timeline.”

Approximately 80 per cent of the fish will be ready for harvest by April 2021, she said.

“We’re working with industry to make sure that this is a fair transition for them,” the fisheries minister said.

The 19 salmon farms in the Discovery Islands — nine of which are already empty — will have their licences renewed until the end of June 2022.

“But it is a very difficult decision because we know that this impacts people’s livelihoods, it impacts the industry and impacts our coastal communities.”

The decision followed consultations by Fisheries and Oceans Canada (DFO) with the Homalco, Klahoose, K’ómoks, Kwiakah, Tla’amin, We Wai Kai and Wei Wai Kum First Nations, which ended at the beginning of the month, about whether to renew licences for the fish farms that operate in their traditional territories.

“The support (of First Nations) was overwhelming with regards to making sure that the fish farms are removed, and so that is my intention,” Jordan said, adding that for confidentiality reasons she could not say whether the decision was unanimous.

The timeline of the decision also coincides with the B.C. provincial government’s move to require the consent of area First Nations on land tenure approvals for aquaculture operators as of June 2022, the DFO stated.

First Nations in the Discovery Islands will be kept in the loop as the fish farms are phased out and are welcome to participate in monitoring the process, said Jordan.

The majority of the Discovery Islands region fish farms are owned by Mowi Canada West, which has 13 operations, nine of which are empty, operating in the waters near Campbell River on Vancouver Island, according to DFO.

Cermaq Canada, Grieg Seafood and two smaller firms own the remainder of the impacted farms in the Discovery Islands.

The plan not to allow any new fish at the farms in the region may mean fish being reared in hatcheries or smolts in entry pens will have to be raised at other farm sites or culled by companies, DFO stated in a press release.

Jordan did not clarify whether the federal government will have to compensate industry operators for the decision to phase out licences in the Discovery Islands.

“We’re willing to work with industry, knowing full well that there will be impacts on them,” said Jordan.

“Those are going to be ongoing discussions. And we'll be doing that over the weeks and months to come.”

The BC Salmon Farmers Association (BCSFA) said the ministry decision had significant implications for the industry and puts the salmon farming sector in B.C. and across Canada at risk.

“This comes at a bad time, during a pandemic when local food supply and good local jobs have never been more important,” said the association in a statement Thursday.

The phaseout is limited to the Discovery Islands and will not impact fish farms elsewhere, Jordan said.

However, widespread consultations with industry, First Nations, conservationists and other stakeholders to formulate a 2025 plan to transition away from open-net pen salmon farms on the Pacific coast will continue in the new year, she said.

Terry Beech, Burnaby North-Seymour MP and parliamentary secretary to the fisheries minister, is heading the process and is expected to produce an interim report in the spring.

Fish farm opponents have long called for the removal of sites from the Discovery Islands region because they sit along a critical migration route for juvenile Fraser River sockeye salmon, which critics say are at risk from disease and parasites from the aquaculture operations.

Fraser River sockeye salmon runs have experienced the lowest back-to-back returns on record, dropping from millions of fish in the past to less than 300,000 this year.

Good decision. And, a good

Good decision. And, a good example of cooperation with indigenous first nations. Demonstrates that it is possible to do.

This is an excellent decision

This is an excellent decision. The decision to ban open net pens on the entire West Coast needs to be formalized in 2025 without allowing industry to influence government foot-dragging. This is not to say that fish farming could not thrive in closed containment on land and isolated from the sea. Government should offer assistance in setting up on land.

This decision follows on the heels of the Trudeau government's announcement on expanding the carbon tax to levels that will actually make a difference. Let's hope that both policies will be enacted before the next election, thereby making it impossible to quietly duck out the side door as they did before on the climate initiatives they campaigned on. If they became law, then that -- and a reasonably good performance on the pandemic -- would give progressives something to vote for after feeling ripped off before.

It would be preferred that the feds quietly ducked out of completing the $13+ billion Trans Mountain pipeline expansion instead.

A good step toward slowing

A good step toward slowing down our loss of salmon. The record of our Federal fisheries people is one of neglect and foot dragging. The fish farms should have been phased out years ago. It will help our salmon survival by the elimination of the open net farms. Other steps need to be taken by the British Columbia government which has the power to preserve the few remaining spawning grounds that have not had their spawning watersheds logged. No point in helping the salmon reach adult size if they cannot find the home ground they left 2 to 5 years ago (pinks are a 2 year fish, some springs are a 5 year fish).