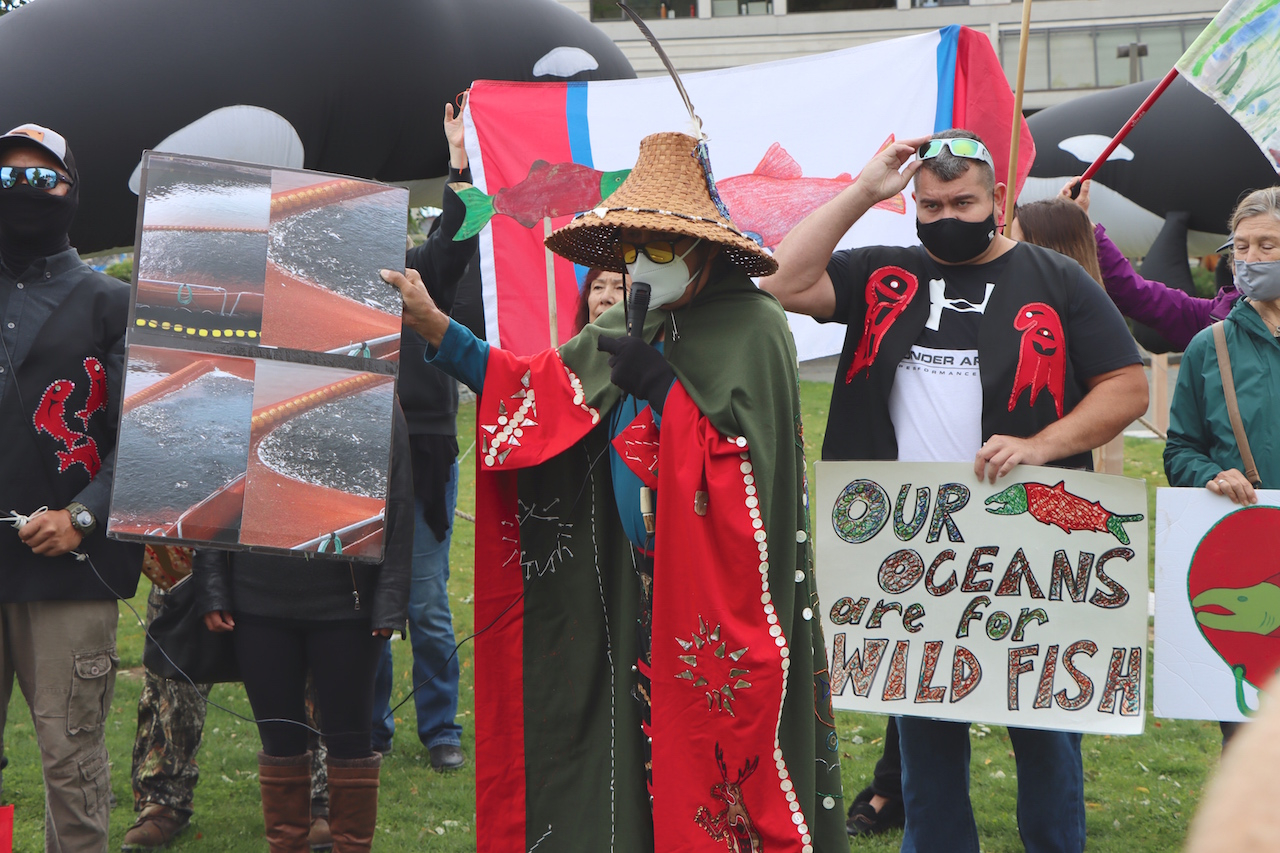 Opponents of open-net salmon farms are disputing this week's finding by the Department of Fisheries and Oceans (DFO) that farms in Discovery Island waters pose little risk to wild salmon.

“It’s a joke,” said Proboszcz, adding DFO also failed to do a synthesis assessment that would evaluate the combined risk all the pathogens and sea lice pose for wild fish.

There are measures fish farms can take to control sea lice problems, and once they are in place, the farms meet the minimum risk threshold, Thomson said.

This claim is misleading, said Proboszcz, adding DFO does require farms to manage one species of sea lice, Lepeophtheirus salmonis, which tends to infect wild pink and chum salmon.

However, DFO doesn’t require them to mitigate, Caligus clemensi, a species that unduly affect sockeye salmon.

The farms were in danger of being shut Sept. 30, a deadline set by the Cohen Commission report investigating the precipitous decline of Fraser River sockeye.

The 2012 report identified a number of factors threatening sockeye including climate change, over-fishing, and loss of habitat.

But it also focused on the potential danger fish farms might pose to migrating smelts and recommended the fisheries minister should remove open-net pen farms in the Discovery Islands unless DFO could prove they posed minimal risk to the health of migrating Fraser River sockeye.

Jordan’s decision takes place as Fraser River sockeye salmon returns – which used to number in the millions – are predicted to be 293,000 fish, the lowest number since records began in 1983.

“Science has established that fish farms can raise sea lice levels, and that these parasites can kill young salmon,” Ritchlin said.

“If you want to protect struggling salmon populations, you should start by getting these fish farms out of the water.”

DFO’s determination of low risk to sockeye from the Discovery Island fish farms is not based on absolute findings, Ritchlin added.

Ritchlin agreed with Proboszcz that examining each disease individually doesn’t give a full picture of the risk salmon face.

Given the precariousness of salmon runs, the fisheries minister should take a precautionary approach and pull the farms if the science is uncertain, Ritchlin said.

NDP DFO critic Gord Johns agreed DFO has minimized independent peer reviewed science, particularly around the threat of sea lice and Piscine Orthoreovirus (PRV), a type of virus prevalent in net pen salmon that could put migratory salmon at risk of various diseases and pointed out the agency is in a conflict.

“It’s abundantly clear that DFO cannot both be a promoter of salmon farming, and a protector of Pacific wild salmon,” said Johns, MP for Courtenay-Alberni.

The federal government should declare a salmon emergency and establish a plan to remediate the Fraser River, a vital watershed for so many communities and First Nations, he said.

“Sound science will support stability and shared values our industry is bringing to the coast today and into the future,” Hall said in a press release.

Salmon farming is part of the economic fabric of the province, he added.

And the industry is working closely and openly with Indigenous people to create a shared future of economic opportunity and environmental stewardship, Hall added.

Aquaculture operators are looking forward to participating fully in the upcoming consultations with area First Nations, he said.

Bob Chamberlin, a former chief of the Kwikwasut'inuxw Haxwa'mis First Nation, said he had little faith in the upcoming consultations between DFO and the seven First Nations in the Discovery Islands region.

“For me to hear the government say that they will have an outcome from all this by December, really shows what a farce this is,” said Chamberlin.

Plus, all First Nations impacted by the loss of sockeye salmon need to have a say on fish farms, he added.

A broad coalition of more than 100 B.C. First Nations, wilderness tourism operators, conservation organizations, and commercial and sport fishing groups all called on the federal government to cease open-net pen operations and move them on land last week, said Chamberlin, spokesperson for the group.

“My question is, ‘who the heck is the federal government listening to?’”, Chamberlin said. “Because it’s not British Columbians but three fish farm companies.”

DFO isn’t operating in the interests of the environment or fulfilling its duty to protect wild salmon, he added.

“And I think that’s something that Canadians really need to be upset about.”

The bias toward the short

The bias toward the short term profits of corporate industry is what is killing planet earth. Humanity, with rare exceptions, does not have the vision to see beyond the immediate gratification of wealth, employment, and power - to recognize the the harm and the rush toward extinction our civilization produces.

I was aware of a tilapia

I was aware of a tilapia fishfarm here in Toronto. It wasn't in natural waterways, it used a balanced ecosystem that included various marine plants and I seem to remember snails ... but that might be mixed up with something else. It was about 30 years ago. Local restaurants raved about the quality of the fish.
So it doesn't seem likely to me that the fish farms couldn't move onland and do the same.

One could be curious as to

One could be curious as to the potential link between this decision and the Liberal Party donor list.

Land-based salmon farming can't be done? And First Nations can't be involved? Tell that to the Namgis First Nation on Northern Vancouver Island.