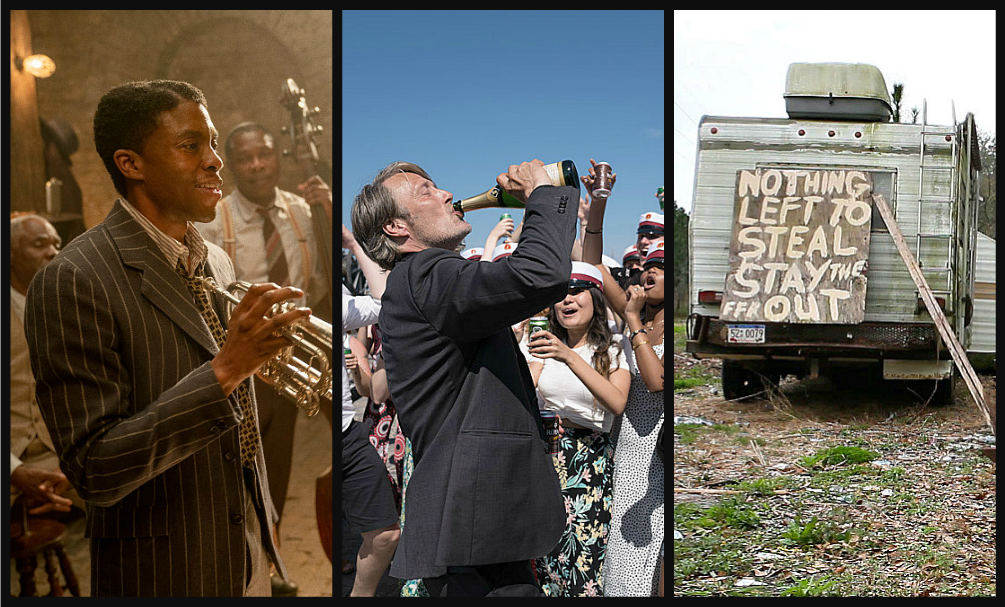 The pandemic has shut down so much, you’d think by now there’d be a slowdown in new movies arriving. For instance, a popular theatre in Ottawa, the ByTowne Cinema, is shutting down for good because of it. But on the streaming sites, the new titles keep coming. Add in the festivals that have gone online, and you’ve got so much to check out.

Right now, there’s a small festival of Turkish films, and the Whistler Film Festival is still going, too. It’s adding new films until Sunday and then leaving everything up for streaming until the end of the month.

You’ll find a few of theirs and a batch of others in today’s reviews.

Swimming Out Till the Sea Turns Blue: 4

MA RAINEY’S BLACK BOTTOM: What a treat. Two Oscar-worthy performances in one movie — those performances being by Viola Davis and Chadwick Boseman. The film is the second made from August Wilson’s cycle of stage plays about the lives of Black people in the U.S. Davis won an Academy Award for the first one, Fences, and is sure to be nominated again for her no-nonsense performance as the feisty old-time blues singer loudly standing up for her demands.

Boseman will be a sentimental favourite because he died as his career was soaring. But he’s more than that. He’s a sly schemer in this film, with a smile for the ladies and a drive to be an innovator as a musician. For that he has to argue with Ma, who fervently proclaims her views to everyone. That includes a cop in an early scene and the owners of a Chicago recording studio through most of the story. If she wants her nephew speaking an intro on a new disc they’re recording, that’s what she gets, even if he stutters and it takes multiple tries. The recording session is perfectly staged by director George C. Wolfe and serves a double purpose. It’s a window on what Black people have had to endure and a call to protect their rights. You’re aware that it’s from a stage play, but that doesn’t detract. (Netflix) 4 out of 5

ANOTHER ROUND: The latest from Danish director Thomas Vinterberg is less harsh and gripping than my two favourites by him, The Celebration and the Oscar-nominated The Hunt. The plot is a bit unconvincing: Four men, level-headed most of the time, test out a crackpot theory proposed by a Danish psychologist that men should have a substantial amount of alcohol in their bloodstream at all times. Four friends, high school teachers all, test it out by drinking every day and justify it by writing a scientific paper that tracks their progress.

Mads Mikkelsen plays a history teacher who bores his students before drinking and runs a lively, inspiring class once he has started. Again, it seems unlikely. One of his pals coaches boys’ soccer and improves the team’s success, although he seems like a meanie when he won’t give a kid a sip from his water bottle and won’t say why. Naturally, other things start going amiss. The history teacher (Mikkelsen) argues with his wife and appears unsteady at work. The men up the intake from “harmful consumption” to “total oblivion.” Sounds like a mid-life crisis and immaturity. Things turn darker, but again, not too believably. This film is very well acted, though, and Mikkelsen does a wild dance. That’s worth watching. (after festival and streaming runs, it’s now available to rent or buy on Apple TV and other VOD platforms) 3 out of 5

SWIMMING OUT TILL THE SEA TURNS BLUE: You have to wait right to the end to have the title explained, but you really don’t need it. The film is made up of a flood of memories. What that flood represents, though, is fascinating and highly involving. Quite a trick since the film is all talk for almost two hours. Through it all, you get a unique history of China, from just after the revolution in 1949 through the Cultural Revolution to the current era, which started in the 1990s when, as one man says, “The whole country went into business.”

The story emerges from life events told by three prominent writers, five “witnesses” and others interviewed by filmmaker Jia Zhangke. He doesn’t do documentaries very often, but with an artist’s approach, he makes this one come alive with drama. You hear how a village was convinced to collectivize agriculture. How a dad was branded a counter-revolutionary and sent into forced labour after he skipped a meeting. His son couldn’t get a job for years because of it. How the institution of marriage revived a squalid village. How communal kitchens broke up some families. There are 18 of these scenes, all contributing to a historical, cultural and even spiritual growth as seen from ground level by real people. (streaming at VIFF Connect) 4 out of 5

MARLENE: I sort of knew the story of Steven Truscott, the Ontario teen sentenced to hang for the killing of a young girl but who was, years later, released on parole because the evidence was faulty. This film fills in a lot of the details very dramatically. It took him 48 years to clear his name, thanks largely to his wife Marlene, who became obsessed with what she realized was a miscarriage of justice, married him and searched for mistakes made in the case against him. She found them in tiny bits of conflicting information in the thousands of pages of documents she went through. It’s compelling to watch her search.

Greg Bryk plays Steven (his son Dempsey, plays a younger version in flashbacks), Kristin Booth plays Marlene (with Julia Sarah Stone as a younger version) and Ryan Northcott plays Julian Sher, the investigative journalist who helped her. It’s a solid cast, who, after some stiff early dialogue, conveys the horror of the case, the pressures on the couple and the outrage of a justice system gone wrong. Nothing flashy here, but forceful as directed by Wendy Hill-Tout and co-written by her with Cathy Ostlere. (WFF streaming) 3½ out of 5

IN HER CITY: Here’s an interesting experiment, and it works out beautifully. There are stories about 17 women in this new film from B.C. director Carl Bessai. He loves to improvise his narrative structures, as we’ve seen in films like Mothers & Daughters, Fathers & Sons and Sisters & Brothers. But how do you put so many characters in one film? You present their stories as vignettes, almost all separate from each other, and you vary the length. Some are just a couple of minutes.

But they all tell a complete story, sometimes only to convey an impression or a feeling. Sometimes with a message, like live for today, be tolerant, resist the power. One character fears she’s a “whitewashed Asian.” Sometimes you’re left to add more to stories with your imagination. In total, they amount to a rich mosaic of women’s experiences. (streaming from WFF) 3½ out of 5

THE GREAT INVISIBLE: This documentary looks at a giant environmental disaster with good intentions, but left me wanting more. It was 10 years ago that an oil rig called the Deepwater Horizon exploded in the Gulf of Mexico. It caused the largest marine oil spill in history — almost five million barrels leaked out. The fishing and tourism sectors took the brunt of the damage, and this film focuses on what they suffered and still are affected by. We get up-close visions from the rig, from people like Douglas Brown, a chief mechanic. And on the land, we get the stories of fish plant workers, tourism operators and residents. We hear of damage to their communities and their frustration trying to collect compensation. That’s all good, but I wanted more on what actually happened. British Petroleum and the rig’s actual owner, Transocean, blamed each other (something about an inadequate “riser pipe”), but the film doesn’t go into that. It just cites allegations of cost-cutting. Offshore drilling was halted until Trump came along, and is worth keeping an eye on. (for streaming, check here) 3 out of 5

MODERN PERSUASION: Maybe knowing that this is from a Jane Austen novel (her last, in fact) raises expectations too high. So it’s disappointing when it plays out like any old romantic comedy with an ambience we’ve seen many times before. If you’re OK with that, go for it. It’s a fun trifle, but not more than that.

The main problem is the people who made it. Directors and co-writers Alex Appel and Jonathan Lisecki (Torontonians who made the film in the U.S.) were more concerned with updating the story than matching its spirit. Music groups The Smiths and The Cure are discussed. American racial issues get a mention. There’s a lesbian character. The classy parties are in the Hamptons. Captain Wentworth survives as the name of a cat. Meanwhile, the novel’s darkness has disappeared, as a young woman (Alicia Witt) working at a promotion and publicity agency reconnects with a man (Shane McRae) she rejected years before. She wonders if she did the right thing and how to proceed now. That’s similar to the book, but the tension and dread is missing. So is the chemistry. What we do get is some bright acting in a frothy bubble. (available digitally and on demand, unless you’re in Ontario or New Brunswick, where four theatres are showing it) 2½ out of 5

MAX CLOUD: Or the new name they’ve given it, The Intergalactic Adventures of Max Cloud, is a slow starter in that you don’t know if it’s working, but it becomes quite fun once it gets going. It plays in a silly comic tone that the less demanding among you could enjoy. Young boys, for sure. Or anybody who plays video games. The film takes cool pleasure in mimicking one when a teen girl finds an “Easter egg” in the game she’s playing, opens up a portal and gets pulled in. She finds herself in an intergalactic prison and can only escape by finishing the game.

As usual in these games, impediments, monsters, fighters and “space ninjas,” on one level, pop up to stop her. She needs help from a friend working the controller back home, superhero Max Cloud and a bounty hunter inside the game to overcome a tyrannical villain referred to as “your greatness.” It’s goofy and light and notable for its star. Max is played by Scott Adkins, a Brit who has been in action pictures for 22 years, and though not as well known as the big names, he has a solid following. His highlight reel has lots of fights against multiple attackers in hallways. You get more of that here. (now available digitally and VOD) 3 out of 5