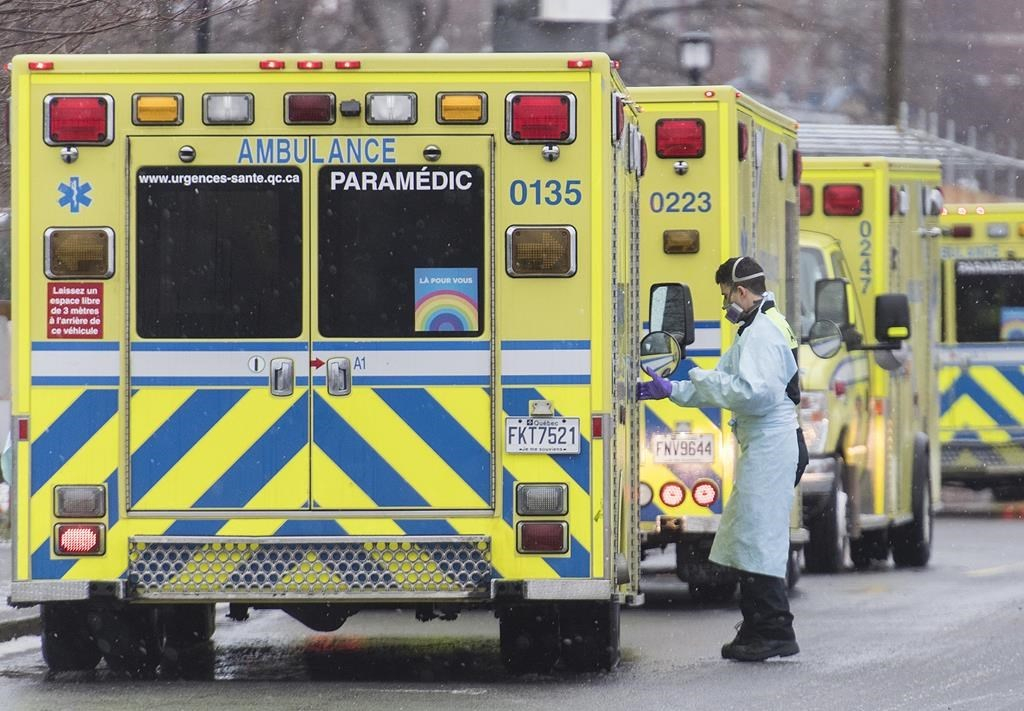 A paramedic is shown next to an ambulance outside a hospital in Montreal, Monday, Dec. 28, 2020, as the COVID-19 pandemic continues in Canada and around the world. THE CANADIAN PRESS/Graham Hughes
Previous story
Next story

Ontario is ramping up its COVID-19 vaccinations after facing criticism for scaling down operations over the holidays, while the Moderna vaccine has started arriving in Canada's North.

Retired Gen. Rick Hillier, who is leading Ontario's vaccine program, said the decision to close clinics over Christmas Day and Boxing Day was the wrong one.

"We've heard the voices of the people of Ontario saying 'get on with this' and that's what we are going to do," he said at a news conference Tuesday.

"We will not take any more days off."

Hillier said more than 14,000 people in the province have received their first dose of the Pfizer-BioNTech shot as of Tuesday morning.

He said he has also asked Health Canada to look into whether the Moderna vaccine could be used as a single dose rather than two.

"Maybe with the high efficiency that protects you in the first needle, it would be best for the entire population if we went with just a one-shot vaccination program with Moderna," he said.

If approved, he said, it could potentially allow millions of people to get immunized faster.

"For the Pfizer vaccine, the second dose is given after 21 days," she said at the time. "For the Moderna, it's after a month, about 28 days.

Ontario is ramping up its COVID-19 vaccinations after facing criticism for scaling down operations over the holidays, while the Moderna vaccine has started arriving in Canada's North.

"We would say give the first dose and then make sure you can give a second dose in a month."

Sharma said officials wouldn't recommend a significant delay in the second dose, but there is some flexibility.

Hillier said Ontario is expected to receive roughly 50,000 doses of the Moderna shot by Wednesday, with vaccinations in long-term care homes set to follow within 48 to 72 hours.

The Moderna vaccine, which doesn't require extreme-cold storage, has already started arriving in the North.

Both the Northwest Territories and Yukon have received their first shipments.

The Public Health Agency of Canada said in a tweet that the first doses arrived in Yellowknife late Monday, while Yukon Health Social Services Minister Pauline Frost said the territory also received its first shipment of the Moderna vaccine.

She said teams are being trained on safe storage, handling and delivery of the doses before vaccinations start next week, immunizing vulnerable groups first, such as high-risk long-term care residents and staff.

Yukon has had 60 total cases of COVID-19, but none are currently active and 11 test results are pending.

There were two new COVID-19 cases each Tuesday in Nova Scotia, New Brunswick and Prince Edward Island, while Ontario reported nearly 4,500 new cases in the past two days. Quebec said it had 2,381 new infections in the past 24 hours. Manitoba said it identified 133 new cases.

Meanwhile, Quebec has become the fourth province to confirm its first case of a more contagious COVID-19 variant.

Health Minister Christian Dube said the person who tested positive is a family member of someone who returned from the United Kingdom on Dec. 11.

Three other provinces have confirmed cases of the new variant in recent days, with three cases in Ontario, one in Alberta and one in British Columbia.

The variant was first identified in the U.K. and has since spread to several other countries.

— With files from Paola Loriggio in Toronto