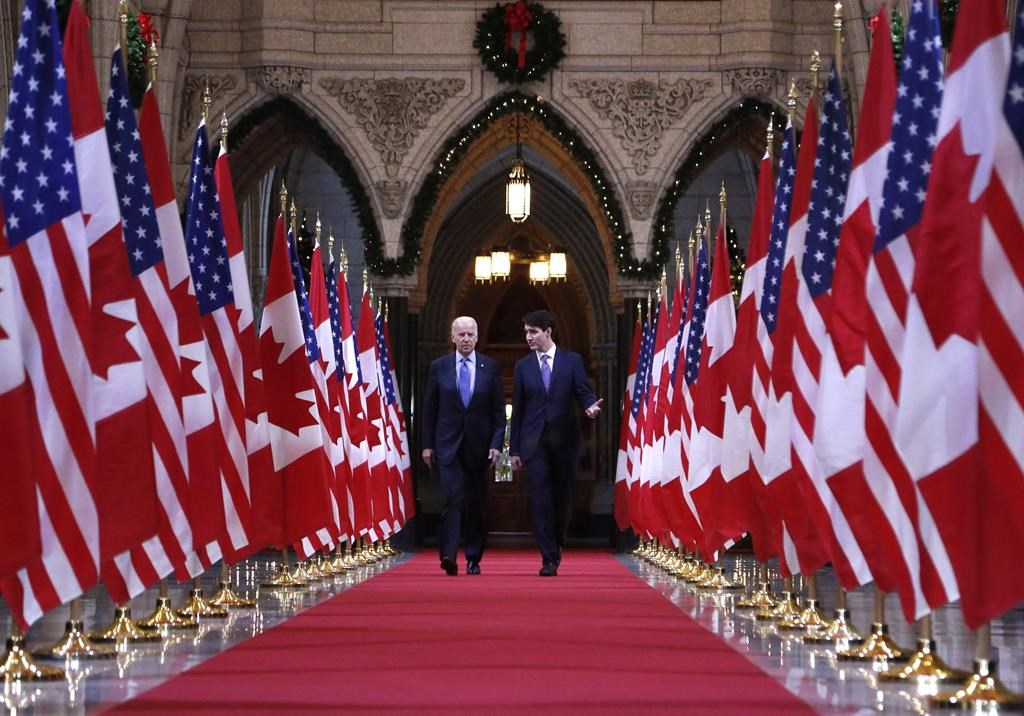 Prime Minister Justin Trudeau and US vice-president Joe Biden walk down the Hall of Honour on Parliament Hill in Ottawa on Friday, December 9, 2016. File photo by The Canadian Press/Patrick Doyle
Previous story
Next story

If Joe Biden's decision to kill off Keystone XL is supposed to sound the death knell for Canada-U.S. relations, you wouldn't know it from the newly minted president's call sheet.

The 46th president's first phone call with a foreign leader comes today and Prime Minister Justin Trudeau will be on the other end of the line.

"I expect they will certainly discuss the important relationship with Canada, as well as his decision on the Keystone pipeline we announced earlier today," White House press secretary Jen Psaki said Wednesday.

"His early calls will be with partners and allies; he feels it's important to rebuild those relationships and to address the challenges and threats we're facing in the world."

Deep in the stack of leather-bound executive orders Biden signed on his first day in the White House was one to rescind former president Donald Trump's approval of the US$8-billion cross-border pipeline expansion.

The project, first proposed in 2008, has been bouncing around the White House in various forms of limbo — stalled throughout Barack Obama's two terms before being outright cancelled in 2015, then twice resurrected by Trump.

Trudeau, who has been careful to point out that Biden's campaign had already promised to block the expansion, did so again Wednesday in a statement that was more celebratory than scolding.

"While we welcome the president's commitment to fight climate change, we are disappointed but acknowledge the president's decision to fulfil his election campaign promise on Keystone XL," the statement said.

Trudeau welcomed Biden's other moves, including rejoining the Paris accord, a moratorium on oil and gas drilling in the Arctic and reversing the travel ban on Muslim-majority countries.

In truth, no one in the Liberal government has suggested the decision is likely to do much to impede talks on other major Canada-U.S. priorities, like winning exemptions to Biden's promised Buy American provisions.

"From autos to our stockpiles, we're going to buy American," Biden said during the campaign, "No government contracts will be given to companies that don't make their products here in America."

Joe Biden's first foreign leader's call is with Trudeau and the president's decision to kill off #KeystoneXL is on the agenda. #KXL #CdnPoli

It took Canada nearly a year to negotiate waivers to similar rules in 2010 when Barack Obama's administration was preparing to spend more than $800 billion to bounce back from the Great Recession.

Biden's plan, aimed at ensuring Americans are the primary beneficiaries of the government's efforts to recover from the COVID-19 pandemic, will also involve a "Buy American" office operating directly out of the White House.

It will also include executive orders to more strictly enforce, expand and tighten the provisions, a strategy to make U.S. products more competitive and expanded the list of "critical materials" that must be American-made.

The new administration will also inherit a Trump-fuelled feud between U.S. and Canadian dairy producers with all the hallmarks of the intractable and ongoing softwood lumber dispute.

And Biden has nominated cabinet members whose track records suggest they won't back down from fights.

John Kerry, Biden's hand-picked envoy on climate change, was secretary of state in 2015 when he successfully urged Obama to reject Keystone XL.

And Katherine Tai, a trade-talks veteran nominated as Lighthizer's successor, is widely seen as a hard-nosed negotiator whose main role will be to enforce existing trade agreements and Buy American rules.

This report by The Canadian Press was first published Jan. 21, 2021.

Anxiety gives way to elation as Trump takes off, Biden takes over as president