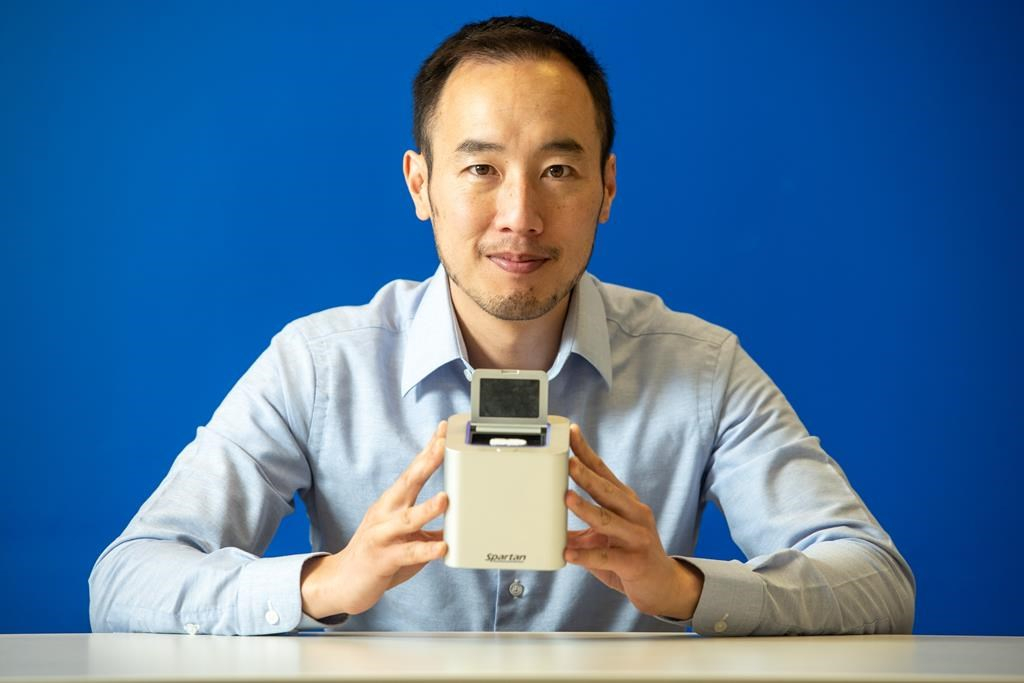 The test developed by Spartan Bioscience is performed by a health-care professional and provides on-site results within an hour, a spokeswoman for the federal agency said.

Spartan bills the test as the first "truly mobile, rapid PCR test for COVID-19 for the Canadian market."

"The Spartan system will be able to provide quality results to remote communities, industries and settings with limited lab access, helping relieve the burden on overwhelmed healthcare facilities," the company said in a news release Saturday.

The company originally unveiled a rapid test for COVID-19 last spring but had to voluntarily recall it and perform additional studies after Health Canada expressed some reservations.

At the time, Spartan said Health Canada was concerned about the "efficacy of the proprietary swab" for the testing product.

The new version uses "any nasopharyngeal swab" rather than one of the company's own design, Health Canada said, and meets the agency's requirements for both safety and effectiveness.

The Spartan COVID-19 System was developed through clinical evaluation completed in Canada and the U.S., with the University of Ottawa Heart Institute as one of the testing locations.

The company said it has already started production on the rapid tests.

"As severe outcomes lag behind increased disease activity, we can expect to see ongoing heavy impacts on our healthcare system and health workforce for weeks to come," she said in a written statement.

Surging new infection rates continued to show signs of easing in multiple provinces, though one jurisdiction was poised to impose new restrictions in a bid to stem the ongoing spread.

Public health officials in New Brunswick reported 17 new cases across the province, 10 of which were in the Edmundston region, which was set to go into a lockdown first thing Sunday morning.

Starting at midnight, non-essential travel is prohibited in and out of the area, which borders northern Maine and Quebec's Bas-St-Laurent region.

The health order forces the closure of all non-essential businesses as well as schools and public spaces, including outdoor ice rinks and ski hills. All indoor and outdoor gatherings among people of different households are prohibited.

Alberta logged 573 new cases and 13 virus-related deaths in the past 24 hours, while both Nova Scotia and Newfoundland and Labrador reported no new infections on Saturday.

Both Quebec and Ontario reported fewer cases Saturday — 1,685 and 2,359 respectively.

But officials in Ontario expressed concern about a highly contagious U.K. variant of the virus that was detected at a long-term care facility north of Toronto.

Simcoe Muskoka District Health Unit confirmed the variant was behind the outbreak at Roberta Place Retirement Lodge in Barrie, Ont., where 32 residents have died of COVID-19 and dozens of others have tested positive.

"Stringent and consistent efforts are needed to sustain a downward trend in case counts and strongly suppress COVID-19 activity across Canada," Tam said. "This will not only prevent more tragic outcomes, but will help to ensure that new virus variants of concern do not have the opportunity to spread."

Fears of variants that can circulate quickly come as the federal government considers a mandatory quarantine in hotels for travellers returning to Canada.

This report by The Canadian Press was first published Jan. 23, 2021.