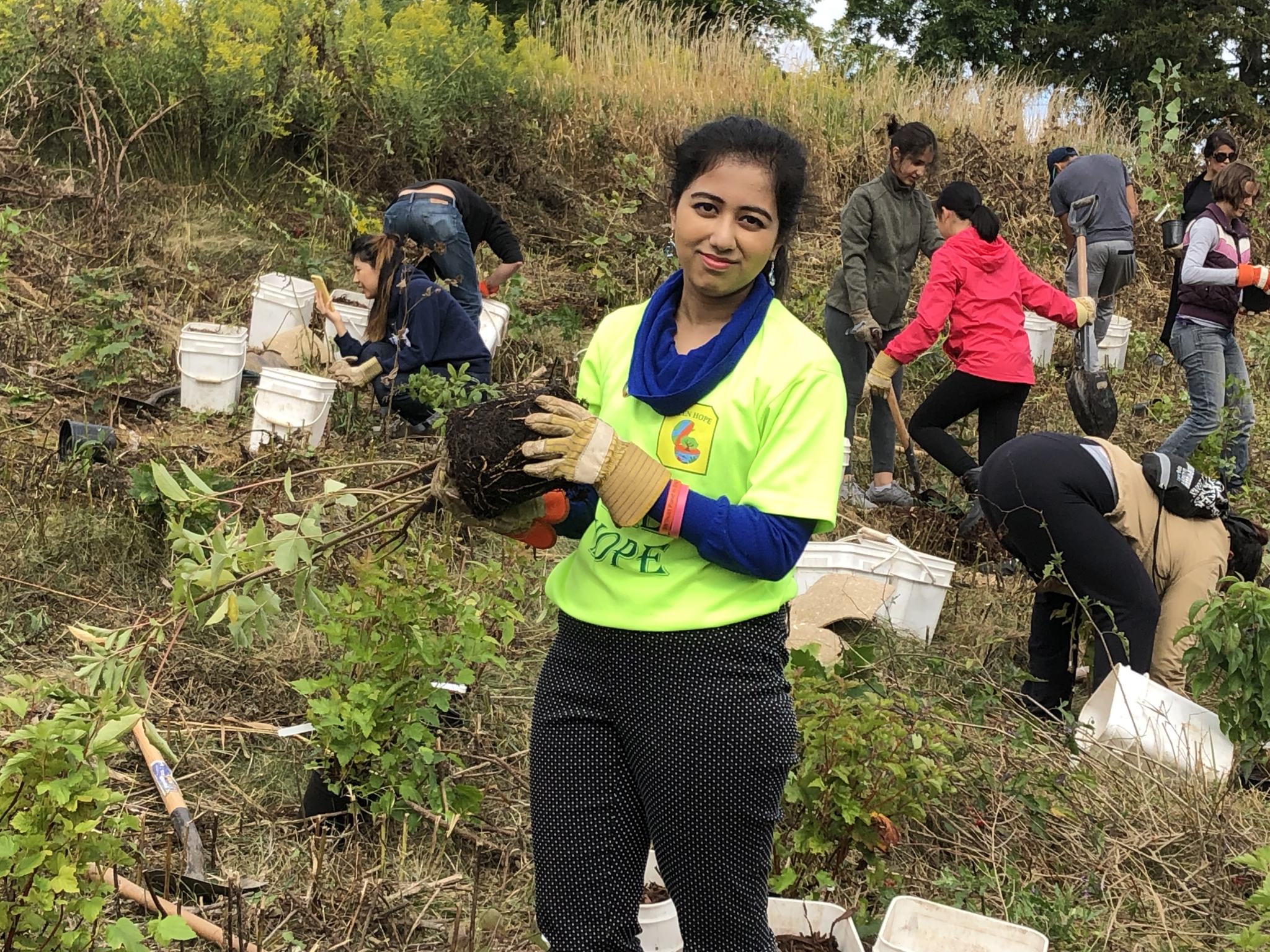 Kehkashan Basu, founder of Green Hope, out on a tree-planting expedition in Toronto. Photo submitted by Kehkashan Basu
Previous story
Next story

As part of a series highlighting the work of young people in addressing the climate crisis, writer Patricia Lane interviews Kehkashan Basu, founder of the Green Hope Foundation.

Basu actively manages all this while playing music and studying full time at the University of Toronto.

This is a pretty diverse set of achievements. Is there a central theme?

"We must make ourselves so powerful that no one can reject us simply because of our age," says Green Hope Foundation founder @KehkashanBasu. #environment #sustainability #youth

Children and young people are essential leaders in sustainable development.

There is a narrative that young people are not equipped to make good decisions.

There is good and bad in every generation. Classifying an entire generation as inadequate decision-makers is not useful. In a Syrian refugee camp, we met a 13-year-old carrying her own baby, even though there are laws and policies against rape and child marriage. But what use is a law when it is not enforced? Children and youth can inspire civil society to get engaged.

Tell me about some of Green Hope’s programs involving children and youth.

Green Hope has worked in 25 countries on projects involving 130,000 children. Examples include helping a severely traumatized six-year-old Syrian refugee and her friends run a tree-planting program, and waste clean-up campaigns. In Suriname, we assisted children to develop a plastic reduction program in their school and orphanage. In total, children and youth involved in Green Hope have planted 130,000 trees, run 165 waste cleanups, and recycled 2,000 tons of waste.

Have your parents influenced your path?

I grew up in Dubai seeing my parents and grandparents taking care of the environment and helping the community. Every Friday, we brought food to underprivileged people. I also spent time with my grandmother as she cared for her organic rooftop garden in Calcutta. At the time, I did not label it as “sustainable.” It was normal.

My parents raised me with empathy as a central value. The idea that you can see a problem and not work on it is strange to me.

What were some other influential events in your life?

When I was seven, I was horrified when I saw a photo of a dead bird with its belly full of plastic. I attended a lecture by the environmentalist Robert Swan. He said, “The greatest threat to our planet is the belief that someone else will save it.” I realized I had to do something. I planted my first tree on my eighth birthday, which happens to fall on World Environment Day, and started my green journey.

How did you come to form Green Hope?

In 2012, I was disturbed to find myself one of the youngest delegates at Rio+20. I decided to provide a platform for children and youth to lead.

With five friends, I started Green Hope, planting trees, cleaning up beaches and raising breast cancer awareness. Our first peer-to-peer sustainability academy drew 100 students. We still use the same formula: organize a group effort like a tree or mangrove planting or a cleanup. Then we link the action to local issues and UN Sustainable Development goals and spread awareness.

Many of the children we work with cannot read or write. They express themselves with music, fashion, art and sport. The lack of inhibition in very young children can lead to amazing insights and solutions.

Tell us about a rewarding moment.

I wrote and performed Green Hope’s climate song and rap at the Syrian refugee camp. Afterwards, an eight-year-old boy came shyly to the front and rapped about his experiences. He had not spoken in months as a result of his trauma, but he was able to rap!

Do you have any advice for other youth?

We cannot allow ourselves to be tokenized. We must make ourselves so powerful that no one can reject us simply because of our age. If you practise what you preach, you become more powerful. The more experience you gain, the harder it becomes for others to dismiss you.

It is common for older people to say they want to support young people, but doubt the efficacy of funding our ideas. I actually had someone say, “Sorry, I would rather fund a fashion show.” See us as worth investing in. It is in your interests that we have a seat at the table.

The smiles on the faces of children who face so much adversity but still hope and plan for a better future, not just for themselves but for everyone.

How one young scientist is protecting fragile ecosystems in Canada's North