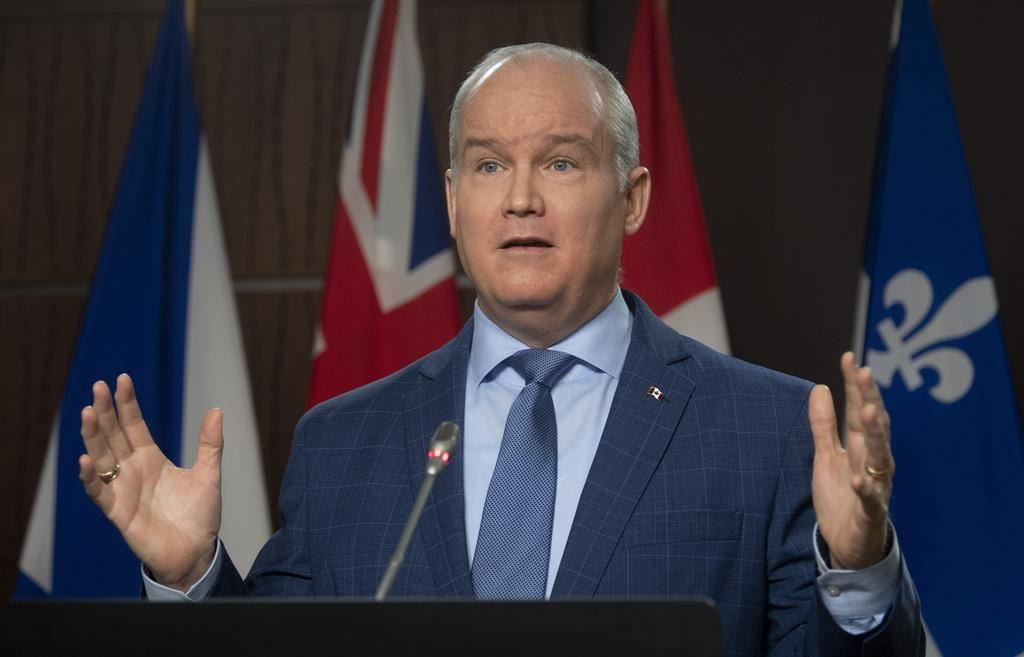 Leader of the Opposition Erin O'Toole gestures as he responds to a question from a reporter during a news conference on Parliament Hill in Ottawa, Thursday, Feb. 4, 2021. THE CANADIAN PRESS/Adrian Wyld
Previous story
Next story

O'Toole told Katherine Brucker that he was disappointed by President Joe Biden's decision to cancel Keystone XL pipeline on his first day in office last month.

O'Toole also said if the governor of Michigan follows through on plans to shut down Line 5 by May it would have a negative economic impact on both countries.

About 87 million litres of oil and natural gas liquids moves daily through Line 5 from Wisconsin to Sarnia, Ont., passing through parts of Michigan.

The U.S. embassy in Ottawa declined to comment on the Wednesday conversation between Brucker and O'Toole.

But the Conservative leader's office released its own readout of the meeting.

"Mr. O'Toole raised his disappointment about the decision of the United States to cancel the Keystone XL pipeline and made the case for why this project should continue, including the economic benefits for both countries," it said.

"He also raised the potential Line 5 pipeline cancellation and the tremendous economic blow this would cause both countries."

"Mr. O'Toole spoke about the need for vaccines in order to secure jobs and turn the corner in the pandemic," the readout said.

Conservative Leader Erin O'Toole has urged the acting American ambassador to Canada to tell Washington to preserve the #Line5 pipeline to the United States. #cdnpoli

A U.S. embassy spokeswoman said Brucker meets with "a wide range of Canadians from all sectors, including political leaders, to learn about their priorities and promote bilateral understanding" but it does not comment publicly on the details of those conversations.

But recent moves by Biden make it unlikely that Canada will receive any extra vaccine doses made in the United States.

Biden invoked the Defence Production Act, after former president Donald Trump did the same last year to push for faster production of personal protective equipment and vaccines. Biden did not specifically mention exports, but he has promised to vaccinate 100 million Americans in his first 100 days in office.

O'Toole also registered his opposition to American tariffs on softwood lumber and the Buy American policies that the Biden administration is also following after Trump.

"They also spoke about the threat the Chinese Communist Party poses to both the United States and Canada. Mr. O'Toole raised the issue of Michael Kovrig and Michael Spavor who are currently being held hostage, and thanked the United States for their willingness to assist in securing their release," said the readout.