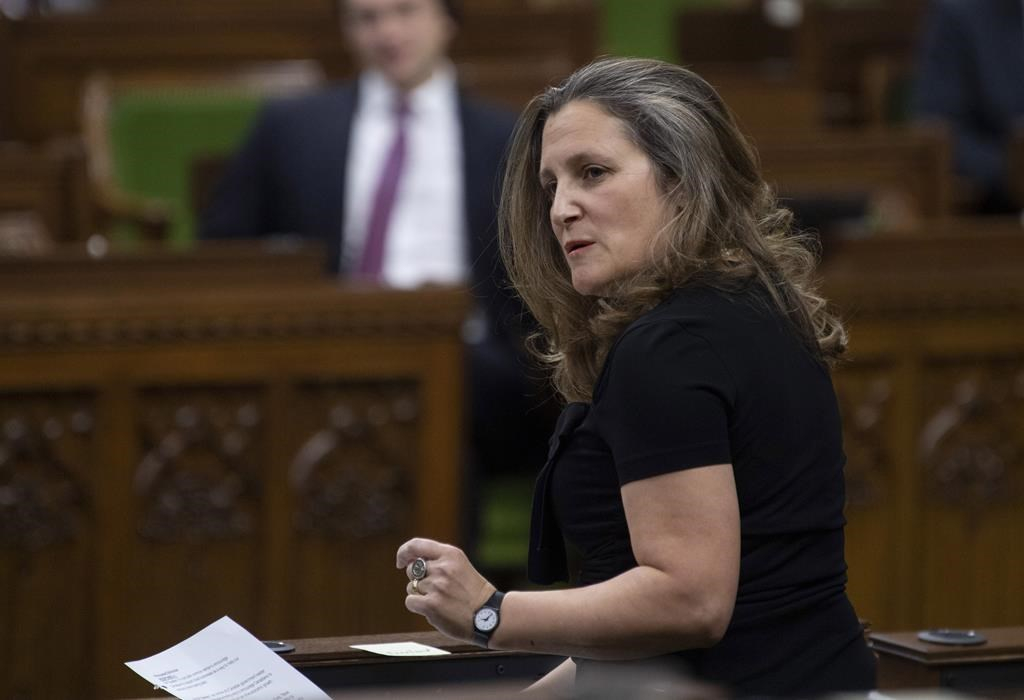 Deputy Prime Minister and Minister of Finance Chrystia Freeland responds to a question during Question Period in the House of Commons on Tuesday, December 8, 2020 in Ottawa. File photo by The Canadian Press/Adrian Wyld
Previous story
Next story

Deputy Prime Minister Chrystia Freeland is appealing to the official Opposition Conservatives to hasten passage of a COVID-19 relief bill through the House of Commons.

The appeal is in a letter from Freeland to Conservative Leader Erin O'Toole sent Tuesday, as members of Parliament return from a weeklong break and prepared to resume debate on Bill C-14.

In the letter, a copy of which was provided to The Canadian Press, Freeland accuses the Tories of having dragged their feet on the proposed legislation for no good reason — and to the detriment of Canadians.

"If you oppose the bill, as you have every right to do, end the delay, let the bill come to a vote, and vote against it," Freeland wrote. "Mr. O’Toole, this is delay for the sake of delay — at the expense of the country."

O'Toole fired back during a news conference on Tuesday morning, suggesting part of the impetus for Bill C-14 was the Liberal government's need to fix errors in previous, hastily passed COVID-19 relief bills.

"Minister Freeland knows that this legislation is intended to fix problems from their last rush exercise," he said.

"We're having some modest debate. She and her government are in charge of the legislative calendar. If it's a priority, we should be debating that bill today and every day until it gets passed."

The Liberal government introduced the proposed legislation at the beginning of December, to enact spending measures proposed in its fall economic statement.

That includes billions of dollars in new pandemic-related aid to top up and expand existing programs as well as new, targeted support for hard-hit industries.

More than two months later, however, partly thanks to a six-week Christmas break in Parliament, the bill has made little progress through the legislative process.

In her letter, Freeland says the bill should not be "a political football," and asks O'Toole to support its passage to help Canadians struggling during the pandemic.

"Bill C-14 provides for support to Canadians who urgently need our help, in an unprecedented and difficult time," Freeland writes.

"I urge you and your Conservative caucus to match deeds to words, and support the speedy and complete passage of the essential COVID-19 measures within Bill C-14."

The economic statement included $25 billion in new spending while noting the deficit was on track to hit $381.6 billion this fiscal year.

However, it also warned the figure could close in on $400 billion if public health restrictions were extended or expanded.

The federal debt is set to push past $1.2 trillion, with more on the way in the coming years before accounting for the government's proposed three-year stimulus fund the Liberals say will be between $70 billion and $100 billion.

The International Monetary Fund, in a report Tuesday about Canada's fiscal response to the pandemic, noted that the added spending "needs further justification" as well as details about the guardrails the government intends to apply to keep spending focused, to avoid uncertainty.

The House of Commons finance committee's budget recommendations included calls for more money to rapidly build or buy affordable units to help house people and stimulate the economy. The report released Tuesday also recommends the government look at the merits of a universal basic income, boost spending on health and long-term care, and start with $2 billion in the 2021 budget as a down payment of sorts on a national child-care system.

The committee report also called on the government to keep federal finances sustainable for the long run.

Attached to the report were dissenting opinions from opposition parties.

The Opposition Conservatives called for, among other things, a plan to balance the budget in 10 years, no new permanent spending programs, eliminating so-called corporate welfare programs, and giving an employment-insurance premium break for any new hires small businesses make.

The Bloc Québécois asked for Quebec to be able to opt out of proposals for national programs for mental health and long-term care, but allow it to be fully compensated for any equivalent provincial program.

The party also called for a boost to federal health transfers to provinces, and increasing the value of old age security payments by $110 per month, among other recommendations.

Federal New Democrats called for an immediate increase in long-term care funding, as well as "clear and enforceable" national standards.

—With files from Jordan Press